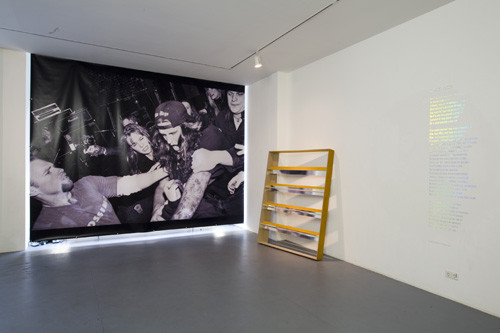 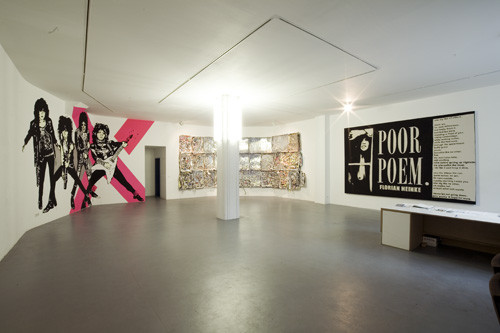 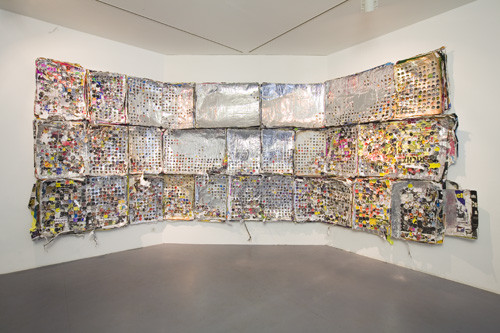 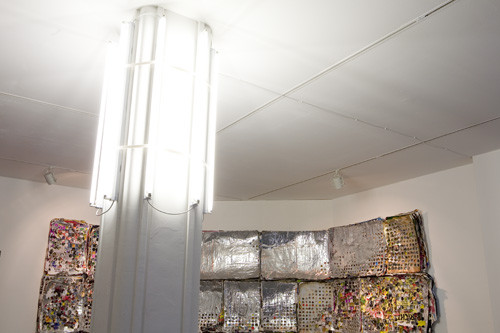 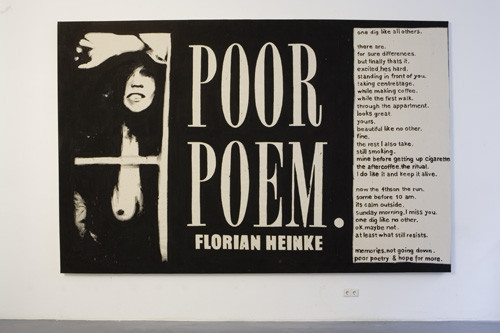 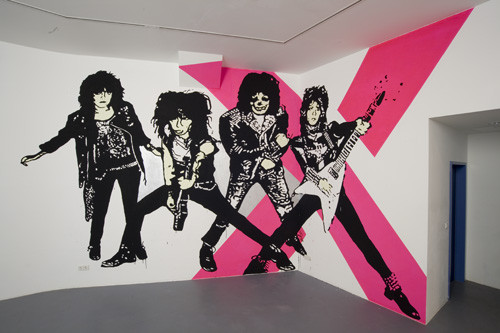 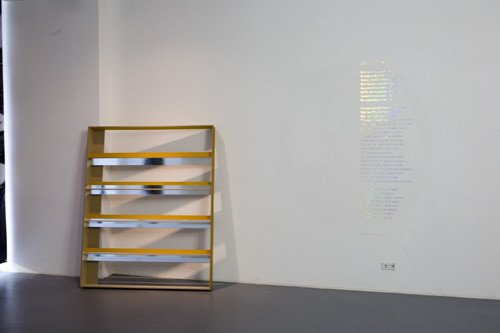 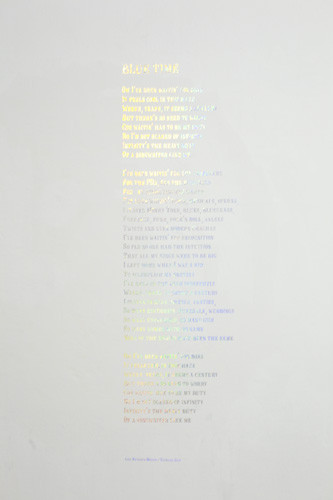 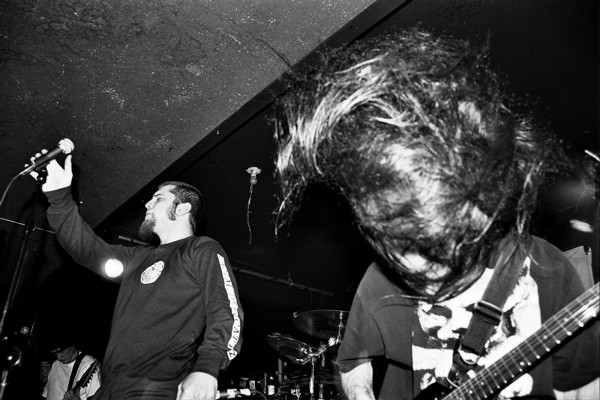 Six men revert to the basic structures of the musical scene, not acoustically, but visually and linguistically in order to convey thoughts or feelings. The word, the reflection and the tender, well-nigh unsettled emotion form three uniting elements between the contrary positions.

Florian Heinke reverts to the rhymes of chanted lyrics to express the love to a woman. Saâdane Afif offers the platform of song lyrics to the artist Lili Reynaud-Dewar as part of his own work inspired by the conceptual altercation with the slow beat of the blues. Daniel Jackson overcomes his own fear of the ‘white screen’, motivated by the battle cry of the band GISM, not to pussyfoot around and to break through all the barriers. Nathan Peter hides words, the name of the band and titles of concert announcements to create new perspectives at the same time, whose cut-outs appear as crossword puzzles in a time travel through the musical history of the town.

Øystein Aasan uses mirror foil to depict the distorted sound of an electric guitar pedal of the seventies through the refracted optical appearance of the Big Muff, contrasting it to the tone of the undistorted sound of the second audio channel. Saâdane Afif writes in reflective, glittering letters, in
which the viewer finds his own reflection and the light breaks up into the colours of a rainbow. Dave Cohen reflects himself, inspired by the classical paintings of Velasquez, in the hand of a woman, who, like himself records the scene photographically as a participating observer. Nathan Peter uses silver foil for concealment and to embed the environment into the work. Daniel Jackson uses silver in combination with pink in a perception of the aesthetics of the eighties, which has brought forth the Japanese band GISM.

Florian Heinke displays in spite of the brutally male choice of words his own vulnerability and self- doubts. Daniel Jackson addresses his own deepest fears and expresses them in a contrarian, expressive aestheticism. Dave Cohen shows images of his own friends in his works, which he has taken on board in deep admiration of their strengths and savagery as a passive, almost shy observer. Saâdane Afif with draws behind his own work with a strange text and offers Lili Reynaud-Dewar space for a doleful production of an elegy of an unsuccessful musician. Øystein Aasan aesthetically withdraws his love of music behind the conceptual mask of the technial idea of the Big Muff. Nathan Peter, through his admiration of the underground scene, squated houses and punk rock concerts, is occupied with the public space in an expressively minimalist work.

A hard and male view – such as the texts of the macho romantic Florian Heinke, the cowboy font of Saâdane Afif, the theoretical concept art of Øystein Aasan, the expressive wall paintings of Daniel Jackson, Nathan Peter’s trash aesthetics and the documentation of brutal scenes by Dave Cohen – hides a sensitive or conceptually empathetic thought. A thought, which is conveyed on the foundation of basic structures of the musical scene.