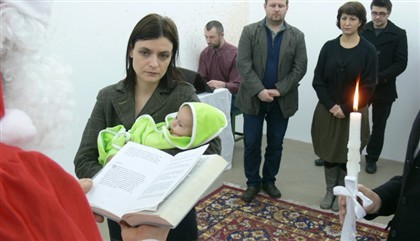 For his third exhibition with prometeogallery di Ida Pisani and his first at the former St. Matthew’s church in Lucca, Ciprian Muresan shows a recent video and two installations specially made for this occasion. “The Unbelonging” speculates on the passage of time in cultural history, the ownership and classification of symbols and the erosion of rituals. The capacity to reflect on our collective destination, to imagine and fabricate a future, is under oblique scrutiny. The video is a dislocated, and hypnotically effective, version of the baptism ceremony performed in Orthodox churches. The ritual happens in a non-descript white space, where certain props recall a religious setting while others disorient the sense of location. Family and friends witness the passage of the child from a state of being right outside the religious norm, to one of obedience and promised redemption, of spiritual give and take. The script of the performance is the canonical text of the Orthodox baptism, a meticulous teasing out of sin, violence, threat and salvation, yet the sacrament itself is undertaken by a character thoroughly, intolerably out-of-place: Santa Claus. The striking heterodox nature of the protagonist is permanently negotiated between the dutiful performance of both text and ritual gestures, and the possible, parallel interpretations the work breaches. The video speaks of a confusion that Christianity itself staged and took advantage of, in its use of symbols of rejuvenation and promises of deliverance, and of the current, converse confusion where spiritual life is engulfed in a world of commerce that narrates, uses and performs religion, that constitutes the present via the future of financial credit and brings presents to good citizens. "Santa Claus" elliptically articulates an economy of the soul, self and social body, one which we enact throughout the year, and in which Christmas is only the anticlimax.
Commodification echoes in another work, which stages an absent character – one who has vanished after having filled a supermarket cart to the brim with copies of Kafka’s “The Castle”, after what must have been a spree through either a complete, impossible archive of culture or in a supermarket of knowledge and classification. Or perhaps in a mutant space that resembles both and conflates their functions. The third work on display is a collection of books whose spine has been cut – yet vandalism is counterbalanced by ambivalent enrichment when original drawings are inserted in the books and the volumes are bound again. Authorship is disrupted, producing hybrid objects in which elements parasitize each other. Muresan complicates the relationship between narratives and illustrations, conceptually and physically enmeshed, all gesturing towards some sort of coherence – looking for a new place, or category, in the archive. As is often the case with the artist’s works, the gesture confuses destruction, preservation, translation and artistic added value.
In these and other works by Ciprian Muresan, distinct points, objects and timelines come together and interweave, they are bound with each other in in-between-ness, while the distance previously separating them – historical, political or cultural – is folded upon itself and marked as the space of representation. These mutable, uncertain objects persistently signal they are no one’s, that they have been extracted from a coherent map of subjects, institutions and worlds, in need to reconfigure after their transformation.
www.prometeogallery.com