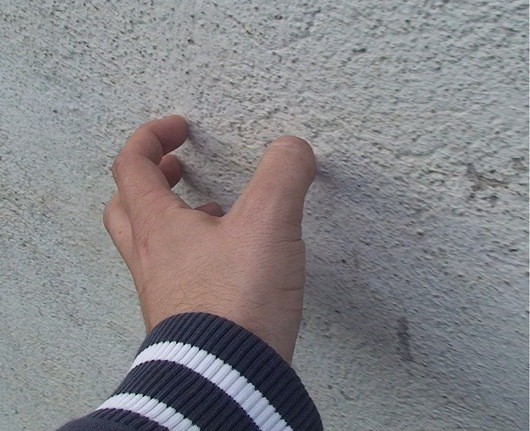 The current exhibition “On Giving Up”, presents several new works of Ciprian Mureșan, including a large sculpture made of posters, drawings, and two videos, shot in Cluj shortly before arriving in Italy. The importance of history, understood as the result of a collective experience but also as a story, as told to children, is once again at the center of Mureșan’s investigation and seems to be a possible underlying theme in the works on display. Mureșan replays our experience of the story, however decontextualizing it from the commonplace of belonging – thus, the poster leaves its habitat, the street, losing its communicative power in order to infiltrate into the closed space of the gallery. There, it becomes a large monolith that you can approach, allowing you to consider the possibility of accessing the information it contains. We wonder if the new context suggested by Mureșan can become a means to critically engage the history of our times?

In the untitled video, made specially for this exhibition, the artist is filmed while touching the surface of the buildings with his fingertips, in a repetitive and obsessive gesture, which reminds the one of children walking down the street. The experience reflects a means of accumulating knowledge but also a way of questioning the social mechanisms and the construction of individuality that follows. It is precisely through these gestures of childhood that Ciprian Mureșan chooses to represent the imperfection of a Story / History that repeats itself obsessively. The video is dedicated to the artistic practice of Francis Alÿs and Andrea Faciu.

Ciprian Mureșan, born in 1977 in Dej, Romania is among the most well-known artists of his generation. Educated at the Academy of Fine Arts in Cluj-Napoca, his works use different means of expression such as video, installation and performance. Since 2005 he is an editor of IDEA art + society magazine. His solo exhibitions include: Stage and Twist (Two person show with Anna Molska), Project Space – Tate Modern, London, Recycled Playground, Centre d’Art Contemporain Genève (2012) and FRAC Champagne-Ardenne, Reims (2012), Ciprian Mureșan,Neuer Berliner Kunstverein, Berlin (2010). Among the Group Exhibitions: III Moscow International Biennale for Young Art, Moscow, Russia (2012), Six Lines Of Fligh, San Francisco Museum of Modern Art – SFMOMA, San Francisco, CA (2012); Image to be projected until it vanishes, MUSEION, Italy (2011); The Beauty of Distance, 17 Biennale di Sydney, Australia (2010);
www.prometeogallery.com