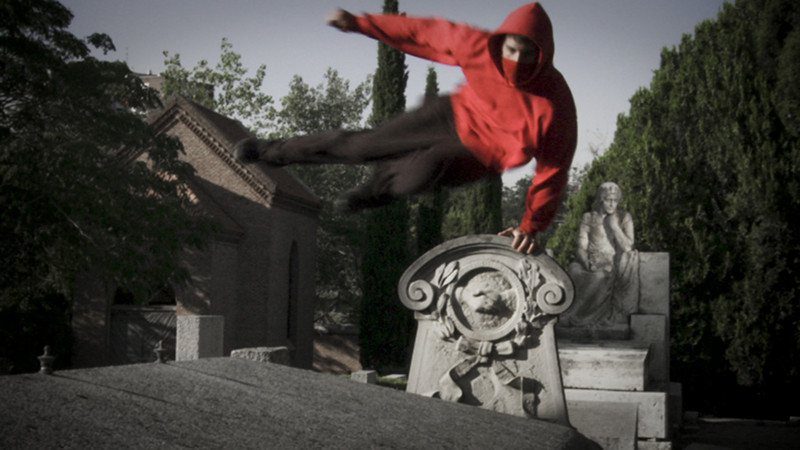 Prometeogallery di Ida Pisani is pleased to present the second solo exhibition of works by the Spanish artistic duo DEMOCRACIA (Pablo España and Iván López). The focus of the exhibition, which is the first to be held in the Milan gallery, is the 2011 project entitled Ser y Durar, which revolves around the recording of a parkour session in the non-Catholic section of the Almudena Cemetery in Madrid. A urban discipline that originated in France in the early 1980s, parkour consists in overcoming any kind of obstacle on a particular course, adapting one’s own body to the surrounding environment. In this case, a starting point and a finishing point were established inside the cemetery and a group of people who practice the discipline were asked to cover the course between the two points. Since the very concept of parkour does not allow for competition, the traceurs (those who practice parkour) met up along the course to discuss the technique, the path chosen and its characteristics, since each participant covers it in their own personal way.

Ser y Durar, from the French “être et durer”, is the motto of parkour and comes from “être fort pour être utile” – “being strong to be useful” – a phrase used to the same effect in Hébert’s Natural Method. Amongst others, presidents of the First Republic of Spain, socialist and communist leaders, philosophers, and even the German artist Wolf Vostell, are buried in this cemetery.

Some interpretations of parkour see a link with situationist psychogeography, which holds that, instead of being a prisoner of everyday routine, the individual should look at the urban context in a radically new way. Parkour recreates an architecture that submits to one’s needs, taking no interest in its function or ideological content. On the contrary, as though in a sort of situationist shift, it plans something new for the city. From this point of view, the discipline can be seen as a sort of urban guerrilla warfare which, in the context of the consumer society, uses techniques of military origin as an instrument of critical urban action.

Another important aspect of parkour is its relation to time. Traceurs actually negate any historical vision of the city and base their action on everyday memory, which is formulated on the basis of the course they take. The artists’ aim is to bring about a sort of monument in the negative – since it is so ephemeral – in which a critical approach to culture is presented contemporaneously with the memory of those who, with their armies and social and political organisations, hoped to create a utopia.

We find ourselves facing a psychogeographical vision of space, which creates a dynamic interaction between the mobility of parkour and the immobility of the necropolis, the dreams of social progress which remain as traces on the tombstones and a popular contemporary practice that has absolutely nothing to do with the age of a revolution that never came about. The project is part of a trilogy that focuses on the city of Madrid, revealing the relationships between contemporary culture and places of social, symbolic and historical importance.

Together with the video, the exhibition includes a series of black-and-white photographs of the tombstones of important personalities, often confining the shot to the epitaphs chosen for their burial.
www.prometeogallery.com