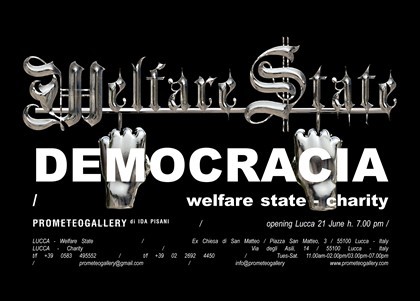 Ida Pisani's Prometeogallery in Milan has grown and is opening a second gallery in Lucca. The director, Ida Pisani, celebrates her return to the Tuscan town where, six years ago, she started cultural and exhibition activities. She presents, for the first time in Italy, the solo show of the Spanish collective Democracia. For this vast show, Democracia exhibit two projects, one in the new gallery and the other in the deconsecrated church of San Matteo.

Pablo Espana and Ivan Lopez, founders of the collective El Perro which broke up in May 2006, are today internationally renowned as Democracia.

The decision to work in a group and not individually arouse for Democracia from the necessity of engaging in an artistic practice focused on discussion, on the exchange of ideas and of forms of action. Their works mainly concentrate on the social, political and cultural sphere, tackling urgent issues and current events which are analysed not only through artistic production, but also through their work as curators and editors (Espana and Lopez are chief editors of the Nolens Voles Magazine).

For their solo show in Ida Pisani's Prometeogallery, Democracia exhibit two projects: Charity in the new gallery and Welfare in the church of San Matteo.

Charity considers the multicultural identity of Europe, analysing a cross-section of life in the Madrid suburbs. Every morning Ecuadorians, Moroccans and Spanish natives meet to look for food in the garbage cans where supermarkets dispose of their expired goods. Multinational companies, fully aware of quality standards, become a sort of Salvation Army and large-scale retail trade turns into a charity and care organization.

Charity is a video whose starting point is an urban action in which Democracia paint on each garbage can the word “Charity”. The video shows the daily recycling practice after the artists have written “Charity” on the cans.

“Charity Perfume” a unique fragrance created by Ernesto Ventos completes the project. A vending machine in the gallery will allow visitors to buy the perfume and, through the sense of smell, walk along the alleys and streets of the suburban and degraded districts of European metropolises.

The project Welfare State is also inspired by a real episode, which it uses to develop a series of considerations on global issues. Fervent supporters of social progress, of solidarity, of democracy and freedom, Democracia question themselves on the current meaning of cultural identity and social ethics, widening their reflection to concepts such as inequality and marginalisation created by mass-consumption society.

Last year in March, a regional law decreed that El Saboral, the biggest shantytown in Europe, located in the southern outskirts of Madrid, would be razed to the ground and its inhabitants, most of whom were Gypsies, displaced.
“Smashing The Ghetto” is the video exhibited by Democracia in the church of San Matteo. Four large screens show the demolition of the ghetto: a large audience witnesses the event as if it were watching a show or a match, cheering on, as if they were passionate fans, the bulldozer drivers as they work. The demolition of El Saboral is shown by Democracia as if it were a sort of show watched by members of society with ill-concealed satisfaction.

A series of photos and a coloured bulldozer decorated with the typical Democracia signs close the exhibition in the church.

Prometeo is a cultural association founded in Lucca on Ida Pisani's initiative. After three years of intense cultural and artistic activity carried out through exhibitions, theme shows, the publication of books, critical essays and catalogues, the need to offer the artists supported by the association access to the European market drove Ida Pisani to open a gallery, Ida Pisani's Prometeogallery.
Located in the artistic district of Lambrate, known as Zonaventura, Prometeogallery continues to present quality work and research with particular reference to the artistic production in peripheral regions and to the most radical currents of the international art scene.
The experience developed throughout these years drove the director of Prometeogallery to open a second gallery in order to strengthen her bond with Lucca, a bond which was never really broken. The galleries in Milan and Lucca will work together, but their exhibition schedule will be different in order to promote the growth and research that Promoteogalllery has always carried out with conviction.
www.prometeogallery.com