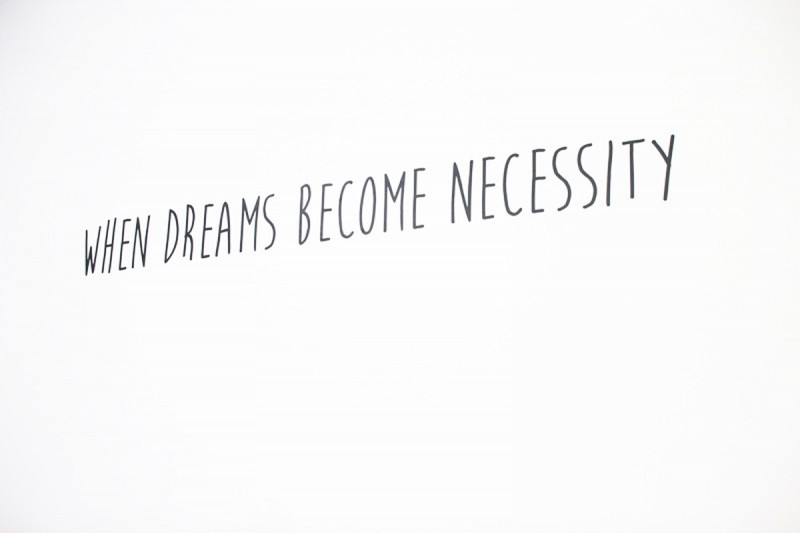 What is the most seductive promise of happiness cached behind a general condition of disenchantment?
When Dreams Become Necessity investigates the importance of some performative attempts with the aim of redefining the idea of failure, Utopia and dreams as foundational moments for building a possible alternative.

When Dreams Become Necessity is comprised of three videos: The Dream of Icarus Was to Make a Cloud (2009) is an attempt to create a cloud by flying with a paraglider; in Some Say the Moon is Easy to Touch... (2011) the artist launches himself in a bungee jump to touch the moon on the day this satellite is at the minimum distance from earth. In Don’t look at The Sun while you’re expecting to Cross it (2014) he decides to cross the sun after the Lovejoy comet passed through the perihelion in 2011, remaining intact.

In the three performative actions, as stated in the titles, the artist tries to reach objectives commonly perceived as impossible. The anticipation and the technical preparation occupy practically the entire length of each video, and come to a quick conclusion in attaining the goal and in the consequent rupture of the illusion. The imagination is not drained by the personal failure nor is it impoverished by the failures of science; rather, it accepts the challenges, opening itself up to reflection and to the research that can turn the promise into a commitment.

The trilogy:
Don’t look at The Sun while you’re expecting to Cross it (2014), is presented for the first time on this occasion. Produced by Vulcano – Unità di produzione contemporanea, Venice.
Some Say the Moon is Easy to Touch... (2011) was presented for the first time on the occasion of the artist’s participation at the Albanian Pavilion of the 54th Venice Biennale (2011).
The Dream of Icarus Was to Make a Cloud (2009) is the winner of the Young European Artist Award Trieste Contemporanea (2009).