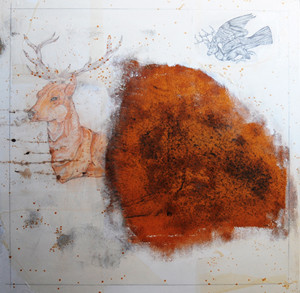 Hèvel havalim, la più grande vanitas, il più grave degli sprechi, (Hèvel havalim, the greatest vanitas, the gravest meaninglessness) is the title of the solo exhibition with which Fabrizio Cotognini offers his reflection on the fleeting condition of human existence around universal themes such as beauty, death, politics, faith, violence, scientific progress, the illusion of immortality, death. And the tablets that are always different from what they seem to be, and the objects and instruments manipulated in their functions, and the elements of nature that perhaps are real, perhaps are fake, and the book, the long book, the book that envelops and that speaks about suffering, all this is vanitas, meaninglessness, Memento Mori, hodie mihi cras tibi.

The triumph of death in a consumer society and the macabre dance by the mass media have a technological and ancient flavor. Nihil sub sole novum, says, too, the Preacher of the Qohèlet, there is nothing else so ancient under the sun... he who reads my words is inventing them, recites Borges. Here is the profound sense of Cotognini’s exhibition, the pivot around which his artistic research has been rotating for some time: quotes. The artist proposes a journey in the territories of the visual culture of our times, conjugates the archaic and the current inside a sole visual perimeter, induces the individual inside in a scenario of fascinating intrigues, Cinetism, anamorphoses, geometric projections that re-invent some of the cornerstones of the history of art. He treats universal themes rewritten in contemporary times, following them along their evolutionary path. And so – between memory and exploration – comes the game of quotes that looks to the works by the greats (from Caravaggio to Pierodella Francesca, to Mantegna), and to popular culture (prints, engravings and advertising). So comes recourse to natural symbols that often render the dynamics of man’s life visible: flowers, plants, animals, insects accompany fragments, picture cut-outs belonging to the history of art which, removed from their formal context, act as path for the elaboration of a new imagination, of a new work. Like the words of Borges that are invented by the person reading them, so the images of Cotognini let themselves be composed by the person viewing them in an itinerary that the artist, pure synetheste, describes by seeing the sounds, hearing the colors, suggesting forms and movements.