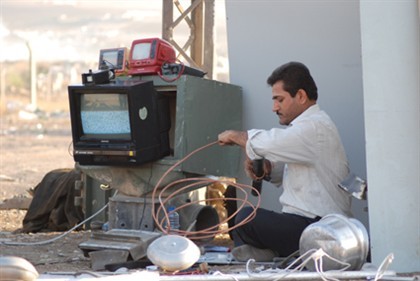 Prometeogallery di Ida Pisani is pleased to present the first solo exhibition in Italy by Hiwa K, Iraqi Kurdish artist living in Germany. Over the past few years his work has attracted the attention of some international curators. Selected by Anton Vidokle for the sixth, non-realized edition of Manifesta, he later took part in “The Rest of Now” exhibition curated by Raqs Media Collective for Manifesta 7. In 2007 “Cooking with Mama”, one of the performances that brought his renown, was included in the United Nations Plaza project in Berlin. In 2009 his video “Moon Calendar / Iraq” was featured in the exhibition “All That is Solid Melts into Air” curated by Bart De Baere for MuHKa and he was selected for the project “Edgware Road. The Centre of Possible Studies” at Serpentine Gallery. His presence in London will continue in 2010 with “The Estrangement Project” at The Showroom. Since 2005 he has been collaborating with Aneta Szylak, director of WYSPA Institute of Art..
Hiwa K in Milan is presenting “Qatees”, part of “Muntadar”, a project consisting of four episodes that examine the memories of four Iraqis: four almost ordinary stories that retrace the past and the present of Iraq, involving politics, international interests and everyday life.
“Qatees” means something that can be neither pushed nor pulled. In this case, it recalls the story of Abas the deserter, electrical technician and antennas builder. Absconding for many years during the Iran-Iraq war led to a dual rift with reality in Abas. In the first case, reality is replaced by what he receives from the precarious, camouflaged antennas that he makes and uses in his underground hiding place. In the second, during the curfew, when he seeks refuge in the dark attic of his shop, reality comes to a halt and, through a shaky attempt to project films, Abas brings to life another time – the time of cinema. “Qatees” examines the interference that is created between two extremes: politics, desires, amateur ingenuity, the regenerative power of the image and poetry on the one hand, and the artist’s desire to tell his story on the other. The setting for the story is Tanjaro, an open-air deposit of scrap metal. Amongst those bits of iron, Abas’s memory and the artist’s attempt to recapture its strands and historical sensations creates the outline for the exhibition project. The display created for prometeogallery experiences the same precariousness of the research as disturbed by that trace. This leads to a scarcely formalized state of suspension between the various layers of reality that constitute different levels of time and geography in the project, underlined also by the musical performance during the exhibition opening. What is conjured up is an in-between time that moves on the waves of the ether and of memory. The effect is that of making the public feel part of a project in which the objects disregard their interaction with the gallery and literally rest upon it. As though it were nothing.
www.prometeogallery.com