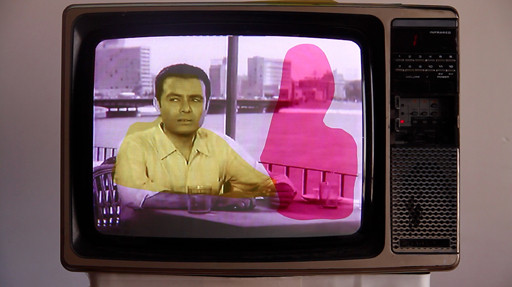 Prometeogallery is pleased to present the second solo exhibition by artist Hiwa-K, after his successful first solo show in 2009.

On this occasion, the artist of Iraqi-Kurdish origin proposes an installation where sheets of colored plastic film are applied on16 black & white TV sets. The title “My father’s color periods” recalls the artist’s personal experiences, a family history, a childhood memory that intertwine and become the leitmotif of the work itself. In particular, the work refers to an event dating back to Hiwa-K’s childhood, at the end of the Seventies, when, in Iraqi Kurdistan, the screens of black & white TV sets were covered with pieces of green, red, yellow and blue plastic film to yield the effect of a color TV while watching films, the news and other programs. Shapes of objects and people, portions of space and landscape thus become colored inserts, fixed and static in continuous visual tension against a flow of images in black & white on the TV screen. A work that testifies to the artist’s continual research and experimentation on practical issues of daily life, always focusing attention on the power games that characterize the system, whether it be economic, political or social.