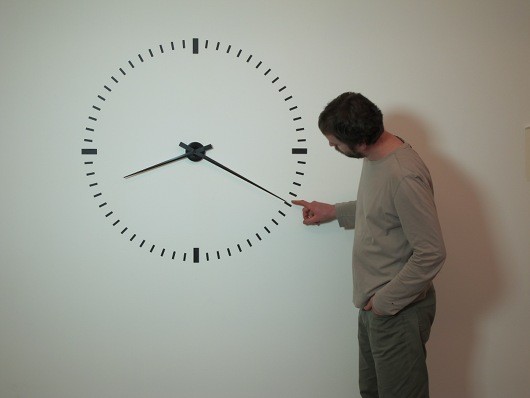 Prometeogallery di Ida Pisani is pleased to present the second solo exhibition of works by Ivan Moudov in its Milan premises.
Based on the idea that art involves and invades social and cultural spaces, Moudov uses a variety of media to narrate reality through everyday situations. He illustrates and tells us about them with a provocative approach that, over the years, has become one of the distinctive features of his work. Ivan Moudov is showing a number of works in this exhibition that reveal this common approach, suggesting a new way of looking at reality and at the world of art. In “Door” (prometeogallery di Ida Pisani, 2012) the actual gallery door becomes a focus of attention for visitors. “Fresh Window” (2012), on the other hand, is a window that will be repainted every day by the gallery staff for the entire duration of the exhibition. In “Performing Time” (2012), it is the artist’s own body and experience that embody the concept of time: in a 24-hour-long video, Moudov moves the hands of a clock, thus creating his own concept of time and giving body to it. In “Dan Dan” (2010), plastic bags containing powder scraped from Dan Perjovski’s wall drawings provide evidence of an action in which the artist destroyed these murals. In “Already Made 4 (Timm Ulrichs)” (2007) Moudov takes up the German artist’s work by copying its act of stealing a work of art. Moudov chooses to steal Ulrichs’ work and then photographs and reframes it a number of times until he has taken total possession of it. In “Right Hand, Middle Finger” (2012), the fingerprint of the middle finger of a right hand is impressed on a sheet of aluminium. “Glory Hole”‘ (2012), a hole on a flat surface, conveys pornographic overtones, while in “The 2000 Syndrome” (2008) video, made just prior to a hypothetical catastrophe, we see the artist waiting for the event. Lastly, in “0GMS cabinet 1′′ (2011) the artist creates a shopping mall with the dimensions and format of a drawer unit.

Ivan Moudov is one of the best-known Bulgarian artists of his generation. He lives and works in Sofia, Bulgaria, where he was born in 1975. He works with a number of different media, including video, installation and performance. His exhibitions include: 2011, “Site Inspection – The Museum on the Museum”, Ludwing Museum, Museum of Contemporary Art of Budapest, Budapest; 2010, Languages and Experimentations – Young Artists in a Contemporary Collection, MART, Rovereto; 2008, Moderna Museet, Stockholm; 2007, 52° Venice Biennale, Bulgarian Pavilion; 2005, 1° Moscow Biennial of Contemporary Art, Moscow; 2002, Manifesta 4, Frankfurt/Main
www.prometeogallery.com