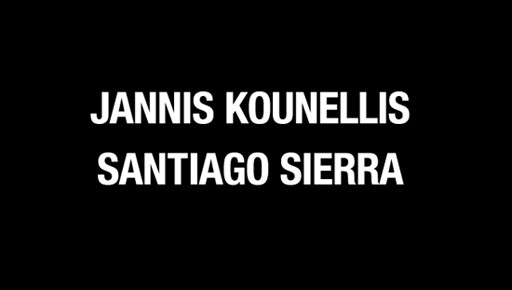 As part of the new program scheduling for 2013-2014, Prometeogallery is pleased to announce an important art event opening on 28th November at 7 pm at its premises and destined to transmit a clear sign of reawakening to the cultural debate.

Spurred by the same impulse, Jannis Kounellis and Santiago Sierra have accepted the invitation extended by Bruno Corà and Ida Pisani, curators of the exhibition, to display two evocative works in the same environments. Having elaborated a new version of Untitled, 1970, more commonly known as “Nabucco”, Kounellis underscores a condition and a cultural phase like the current one, characterized by a diffused “lull” in artistic action and in social dynamics as well. Analogously, and by proposing the multimedia work Marsigliese, Sierra, in harmony with Kounellis, re-elaborates one of his previous plastic works, meeting a peremptory public demand.

While the repeated notes of the two hymns alternate, a dramatic atmosphere diffuses in space. Premonitory works to which event? It is what the exhibition leaves pending like an appeal to the individual imagination.

It is not the first time that the two artists meet, but it certainly the most meaningful of recent years.
Participation in the event promises an authentic experience not to be missed.
www.prometeogallery.com