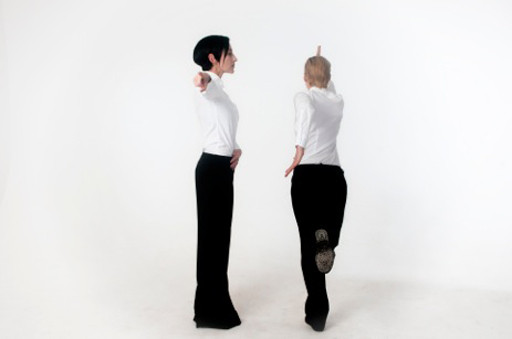 Maria José Arjona’s performance research is aimed at exploring the potential of the body meant as a live entity capable of feeling, of acting and reacting. A body that becomes a powerful means of visual communication, an exchange of symbolic energy between the artist and the audience, and a conscious producer of meaning. It is a body that, through minimal, non-hierarchized gestures, investigates the concepts of space and time. A “universal” body, removed from its own personal experience and from any particular social or political context of belonging. For this reason, Arjona’s actions always maintain a composed metaphorical quality, differently from the practice of other artists coming from the Latin American continent who use the performance as a privileged instrument for expression, often re-enacting an even physical violence on their own bodies.

Agent/Encoding/Flow is a transcription of the Morse code into body language. The Morse code is a system of transcription of its own – the first adopted by today’s digital communication – consisting in a series of points, lines and intervals transmitted through intermittent electrical impulses that generate a sound which, once received, is re-translated by the receiver into language.

Agent/Encoding/Flow recuperates this “ancient” code system to translate the thirty articles that comprise the “Universal Declaration of Human Rights” (1948) into a visual text, interpreted simultaneously with the choreography of Marvel Benavides and its deconstruction by Maria José Arjona who, through antithetic but complimentary modes, translate the signs of the Morse alphabet into pure gesture and movement.

The “Universal Declaration of Human Rights” (1948) is an ethical code of fundamental historic importance: the first to universally ratify the rights that every human being is entitled to, destination point of a long philosophical debate that from classical times has reached our day and whose principles are now considered inalienable by most civilized nations but that are, still today, often infringed ...

Agent/Encoding/Flow is a metaphoric tale of two stories, two bodies and two different presences, each endowed with a marked identity capable of sympathetically and physically interacting with the other, creating an estranging short circuit between choreography and performance gesture. The result is a cockeyed look that emerges from the characteristics of a double vision which, by crossing the scene, gives rise to an action comprised of reverberations, juxtapositions, interactions and contrasts where body language once again returns to being symbolic, a receptor of connectivity and “codification agent of a flow” that becomes social, political and cultural exchange.

María José Arjona (1973, Bogotá) lives and works between Miami, FL (USA) and Bogotá (Colombia).
She has presented her performances in several festivals and institutions in Europe, America and Latin America, among which: Manchester Art Gallery, (MIF-Manchester International Festival 2013); Museum of Contemporary Art of Medellin, Medellin/Colombia, Location One, New York/USA, JCVA Jerusalem (2012); N-CE Arte, Bogotá/Colombia, Museo Del Banco De La Republica, Bogotá/Colombia, The Ballroom Marfa, New York/USA; The New Museum. New York/USA, Museum of Modern and Contemporary Art, Rijeka/Croatia (2011); Museum of Modern Art (MoMA), New York/USA, Museo Madre, Napoli, Abramovic Studio at Location One, New York/USA, BrotKunsthalle, Vienna/Austria (2010); / Haus Der Kulturen Der Welt. Berlin/Germany (2009).
She has also participated in the Fourth Marrakech Biennale (2012), the Croatia Biennale (2011) and the Third Guangzhou Triennial /China (2008).
She was resident artist at the Watermill Center in New York (2009) and at Location One, New York (2012).
In 2010 she participated in the re-proposal of the performances by Marina Abramovic for The Artist Is Present, a retrospective of the artist at the New York’s Museum of Modern Art (MoMA), USA.

Marvel Benavides
Colombian ballerina, she studied classical ballet, becoming prima ballerina in the Colombian National Ballet company (1982-89), with whom she participates in several international tours. At the same time, she starts up a series of interventions in contemporary dance, jazz, ethnic dance and collaborates with the National Theater in Bogotá.
In the last fifteen years, she has worked with several contemporary dance companies and participated in many festivals (Seoul, Miami, Madrid, Seville, Càdiz, Rome, Montevideo).
She has held workshops and dance courses in several countries such as Canada, the United States and France.
www.prometeogallery.com