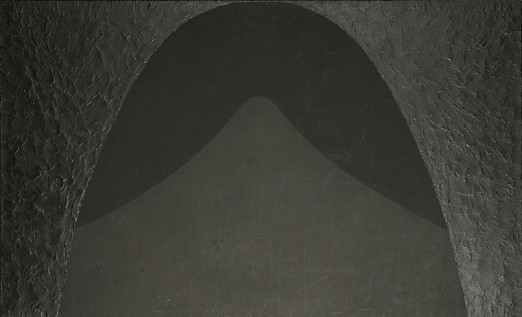 “Brought together by the common denominator of Black, interpreted by each artist from a different angle, the works actually seem to aim at giving life to manifold degrees of luminosity, which each time is achieved through original and extremely personal materials and techniques.

Despite always having been considered the negation of light, if you consider that in the cosmological sense the universe is mostly made up of dark matter and energy, Black is still a largely unknown and widespread protean entity.

As Frédéric Portal mentions, in Genesis cosmogonies describe the battle of light against darkness. One can find this secret struggle between light and darkness in the works of artists such as Alberto Burri, Louise Nevelson, Nunzio di Stefano and young Rossella Biscotti, artists who are committed to providing greatly different suggestive shapes, degrees and intensity of such an antinomy.

At the exhibit visitors will be able to view examples of radical balance by Alberto Burri, of different surface treatment by Louise Nevelson, by Nunzio di Stefano viewers will be able to appreciate on one hand the knowledgeable assemblies and on the other the rigorous subtractive and structural action of the volumes and reliefs blackened by soot of burning wood. Alongside these creations, the work of young Rossella Biscotti dialogues with its own invented figure that carries light through original conductors.”

The exhibition at the prometegallery of Ida Pisani stimulates a reflection on a color, black, considered by some non-color. It also inspires considerations on an entity, light, on which ideal, conceptual reverberation, a vast literature corpus and even aesthetic thought have never stopped questioning.
www.prometeogallery.com