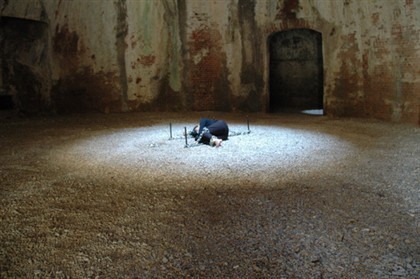 Prometeogallery di Ida Pisani is pleased to announce the forthcoming opening in its Milan premises of the solo exhibition of works by Regina José Galindo. Entitled Juegos de poder (Power Games), it shows recent actions that the Guatemalan artist has created over the past two years in her own country and in the United States, South America, and Italy. Immigration, determination, nudity, empathy, biology, power, anger, sadism, desperation, coercion, and freedom are the words around which Regina José Galindo’s artistic concepts and actions have always revolved. In her performances she lends her body to these words, using it as though it were not her own – as though it were merely a mirror. In the work that gives the exhibition its title, Regina José Galindo slavishly follows the instructions of a hypnotiser. It is one piece in a long artistic investigation into the sadistic nature of power and its irrepressible thirst for uncontrolled freedom. It is along this fault line that Regina’s work focuses. Her attention is on the psychological inability of power to fill its own void. When the Havana Biennale asked her to take part with a work, she very ironically sent a half-length bust of herself, as a work that explodes the myth of the political artist, while at the same time reinforcing it. In "America’s Family Prison", she lives for 24 hours in a cell together with her family, and then she leaves the door open so that the public can try it out as though it were an art object. In "Curso de supervivencia para hombres y mujeres que viajarán de manera ilegal a los Estados Unidos" she organises a series of lessons for future illegal immigrants, teaching them how to resist fatigue, how to take bearings and read maps, with an introduction to first aid, and how to light a fire and climb a wall. In other words, how to survive in extreme conditions. In Let’s Rodeo she submits herself to an exhausting resistance test astride a mechanical bull, in a futile attempt to tame it. In her most recent works, Regina José Galindo has started to involve the public, giving them the task of revealing and liberating her body. In "Libertad condicional", a recent action she put on in Livorno in July this year, the artist lies down on the gravel, chained to the centre of an area marked only by a spotlight. A big bunch of keys is in front of her, while the public move around her. Satisfied by the sight, after a while someone goes up to her, touching her and stroking her hands and face at length, as though to feel what she is made of, and then attempting to free her. Another person joins in, and then another, until the work is complete, and the chains are released. This time, freedom depends on others.

Regina José Galindo (Guatemala City, 1974) took part in the Venice Biennale in 2001 and also in 2005, when she won the Golden Lion for Best Artist under 35. This year she is in Venice with the special “The Fear Society – Pabellón de la Urgencia” project curated by Jota Castro for the region of Murcia. Her works have been exhibited at many venues, including PS1 in New York and Le Plateau in Paris, and they are now in several public and private collections. In October she will be opening an important solo display at Exit Art in New York, and in December she will be in the Art Nova section of Art Basel Miami.
www.prometeogallery.com