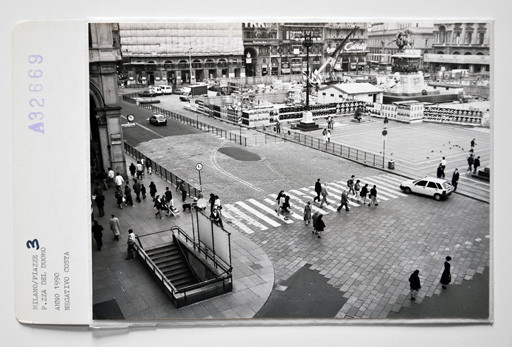 Synapses is a new project by Stefanos Tsivopoulos – Greek Pavilion at the 55th Venice Biennale in 2013 – curated by Matteo Lucchetti, and comprised of an exhibition opening on 16 September at 7pm at Prometeogallery di Ida Pisani, and a series of actions and performances conceived for the public sphere of Milan, which will take place on 16 and 17 September, co-curated by Careof DOCVA and with the collaboration of Assessorato alla Cultura and Assessorato al Benessere e Tempo Libero of the Municipality of Milan.

Synapses is the first entirely non-filmic production by Tsivopoulos and gathers, within the exhibition space, an heterogeneous group of works that reflect, in different ways, the artist’s attempt to shed light on the economic structures that regulate the different fields of production in our society. The synapses, literally the minute gap across which impulses pass by diffusion of a neurotransmitter, are intended as historical, economic, cultural and geo-political junctions that the pieces on show try to visualize in sculptural, pictorial, and photographic forms.

The public programme of Synapses consists of seven minimal and immaterial situations, staged or improvised, happening simultaneously in different locations in Milan. Each situation is developed by its performers in relation to the place, and follows a script that loosely mirrors the historical, social and economic fabric of the seven selected venues.

Synapses explicitly draws inspiration from the Situationist dérives, as well as from the conception of synchronicity by Carl G. Jung and the action 49 Waltzes for the 5 Boroughs by John Cage. The project can also be considered as a continuation of the Greek Pavilion work, History Zero, where three individual, diverse and yet interconnected stories are showing different approaches to an economy dominated by the all-encompassing monetary crisis in Greece. The narrative developed in the actions engages both spatially and mentally the gaze of the participating audience in unsettling visions, opening up the city to unobserved perspectives.

The audience can attend the public performances of Synapses for free by subscribing to synapses@prometeogallery.com, to receive a detailed program with all the information on the hours and the locations.

Conceptually grounded to previous works – such as Amnesialand (2010) and History Zero (2013) – the show at Prometeogallery di Ida Pisani is further articulating on the political agenda behind the origins of the most primary materials that compose artworks, commodities and ultimately history.