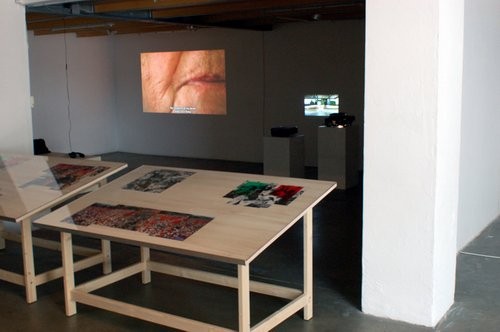 Installation views, The Documentary
THE DOCUMENTARY

Two years after The Archive exhibition, prometeogallery di Ida Pisani is returning to the same theme with The Documentary, a group show of emerging Italian artists. Opening on Tuesday 22 June, the exhibition focuses on the possible significance of a single history, through the works of four different artists. And this history, or rather this memory, is that of twentieth-century Italy.

Through the works of Zbynek Baladran, Stefanos Tsivopoulos and Eva Stefani, “The Archive” concentrated on the use of found-footage as promoted by a new generation of international art, but the new exhibition is extending this research into the use of images from the past to a broader spectrum of documentary work, with slideshows, photographs, installations, videos, and a range of printed materials.

But especially, and more in general, “The Documentary” interrogates the document or image as a document in itself: the textual regimes it informs, the processes of identification that it legitimises, and the temporal dialectic it establishes. While it does show us a plausible history, the exhibition also probes the narrative principles, the regimes of truth and the objective evidence that have given and continue to give this history its form.

Designed as a set of diverse documents, the exhibition brings together evidence of facts, archived data, and the signs and traces of actions that the invited artists attempt to decipher, bring together and arrange in a different order and in new relationships. Rossella Biscotti (1978), Gianluca and Massimiliano De Serio (1978), Moira Ricci (1977), and Mirko Smerdel (1978) are all representatives of an emerging Italian scene that is powerfully characterised at the generational level by an initial deviation: from the disappearance of public memory, from a past that has been removed, and from the unknown collective unconscious of a Italy Year-Zero.

As documentarists, creators of reality effects, and authors of counter-memories and private mythologies, the artists perform a twofold research into the images of the past and into the means of representing it. Curated by Marco Scotini, “The Documentary” is an attempt to fuse time not into a past that preserves but into the present that creates it. As such, it is not just a matter of telling stories but more one of creating devices in which history can come about, as Guattari once said.

“The Documentary” is an exhibition in which Rossella Biscotti’s investigation of the official bronze portraits of Mussolini and Victor Emanuel III, which were abandoned in the storage spaces at EUR (The Heads in Question, 2009), like the documentation about the monument to athleticism represented by the Piscine Foro Italico interact with the collection of official photos of Enrico Berlinguer’s funeral in Mirko Smerdel’s collages Mille antenne ripetono: Addio... (2010). Similarly, Tuscan folktales (Da buio a buio, 2009) and regression into the infantile unconscious in Moira Ricci form a short-circuit with the experiences that are psychologically expropriated and filmed in De Serios’ highly strung Tanatologia, 14 maggio 1958 and Seam. While the concept of history was a necessary and enduring aspect of a sedentary society, memory, or rather memories, are an essential construct of our nomadic worlds, which move through both time and space.
www.prometeogallery.com