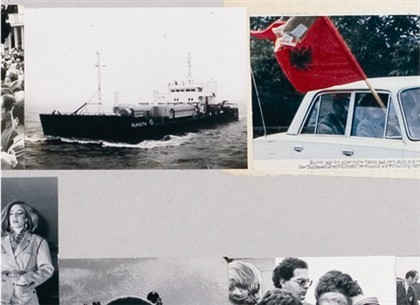 VANGELIS VLAHOS
"Between facts and politics"


Prometeogallery di Ida Pisani is pleased to announce the opening of the Between Facts and Politics exhibition, with works by one of the most renowned Greek artists, Vangelis Vlahos. For his second show in Italy, Vlahos has installed a generous selection of his recent works in the gallery, most of which have never been shown before.

Internationally acclaimed for his work on social-history archives, on the symbolic value of architecture and on public memory, Vangelis Vlahos is bringing to Milan a broad-ranging work of 22 paintings/displays with an arrangement of photographic material and newspaper cuttings referring to about one year of Greek history, under the title 1981 (Allagi). Both this work and the second in the show, which is a sequence of 42 photographs under glass, entitled Images to Influence the Reading of Greece’s Interests in Eastern Europe and the Balkans Today, take their original documents from the archives of Eleftheros Cosmos (“Free World”), which was the official newspaper of the military junta of the Colonels in Greece. The last work, which is also dedicated to the influence of Greece’s current role in the Balkans, consists of two architectural scale models, The National Bank of Greece (NBG) 1961-2006.

The ruins that Vangelis Vlahos brings to light are not exactly “classical”, even though the remains that emerge from his excavations are often fragments of urban architecture.

The immediate impression is that the relationship between the safety and vulnerability of power is at the heart of Vangelis Vlahos’s works, irrespective of the type of power (military, political, economic, etc.) involved at that particular time. Indeed, it is precisely the most significant transitional periods and moments of change – such as the fall of the Greek military junta or the end of the Berlin Wall – that best reveal the resilience or fragility of power behind the means it uses to show or conceal itself.

Even so, what Vlahos’s works show us is in any case a representation of power which is always caught precisely when its supposed integrity is threatened or tarnished. Traumatic political incidents that put power at risk or that challenge it acquire the same significance as the objectives it fails to achieve, the projects that are never realised, or the ruins of a reality that does not fully come to fruition.
On the one hand we find in Vlahos’s works a 1:150 scale model of the American Embassy in Athens, which was built to a design by Walter Gropius in the late 1950s. This cardboard model is shown perfectly intact next to a curved metal wire that indicates the trajectory of the anti-tank rocket that was to have hit the diplomatic mission but that fell outside its walls. On the other hand we find a scale model of the Tower of Piraeus. This was a 25-floor building commissioned by the military junta as a monumental business and trade centre for the most important port in Greece. It was never completed or entirely used before the regime of the colonels fell in 1974 and was thus a failed utopian dream.

But this representation of power acquires full meaning in the work of Vangelis Vlahos only when compared with another principle of authority, which is the fundamental principle of history, and of the discursive formation that we refer to as “history”. It is here that the true importance of Vlahos’s work comes out in its entirety – when what is being investigated is not so much the deeds and data of power as such, but the knowledge that they define, and the influence they exert. In other words, the ways in which these data are recorded and accumulated. Or better, the strategies they adopt to create a memory or bring about a deletion of history to create permanent or temporary amnesia.

The exhibition is accompanied by a catalogue published for the occasion by prometeogallery di Ida Pisani, with essays by Marco Scotini and Aristide Antonas.

The work of Vangelis Vlahos (Athens, Greece, 1971) is celebrated around the world. His participation at the Prague Biennale (2007), the Sao Paulo Biennale (2006), the Berlin Biennale (2994) and Manifesta 5 (San Sebastian, 2004) have all been most significant.
www.prometeogallery.com