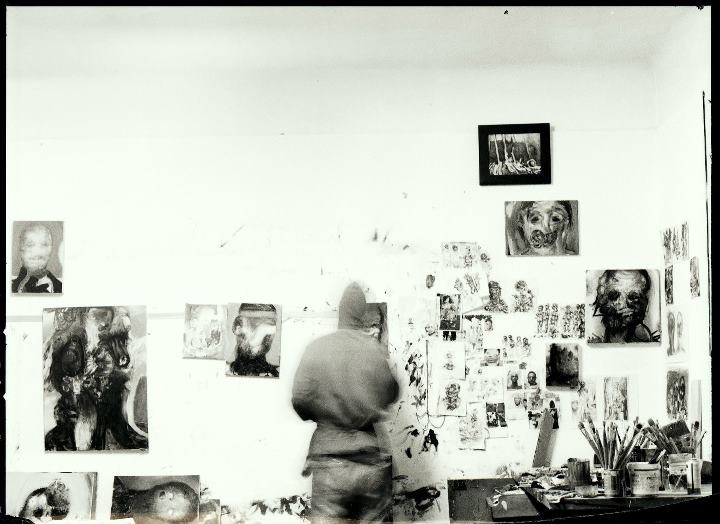 Prometeogallery di Ida Pisani is pleased to present the first solo exhibition in Italy of works by Veres Szabolcs.
Veres Szabolcs studied at the school of Cluj-Napoca, one of the most creative centres of contemporary visual research and has become a highly talented artist with an intense focus on the ability of painting to grasp profound truths about our present-day world. In recent years the Fabrica de Pensule – the great factory building that has become a symbol of new creative expression – has seen some of the most talented young European artists pass through its doors. These include Ciprian Muresan, Adrian Ghenie, Victor Man and Serban Savu.
Cynical and caustic, Veres Szabolcs’s painting starts out from a revisitation of some of the most enduring compositional themes in the history of art. The great human figures we see in the exhibition recall the hieratic portraiture that adorned the most solemn portrait galleries in Europe, and yet they appear to explode as they come into contact with contemporary culture. Starting with their own anatomy, the faces, muscles, clothes, poses and positions collapse into a concentration of contradictions, telling the tale of a boundless, totally disproportionate aesthetic in an inconvenient, uncompromising form of painting.
From this point of view, Veres Szabolcs’s work runs along similar lines to those visual investigations that bring into question the representative capacity of the image. The founding fathers of painting include artists like James Ensor, George Groz, Francis Bacon, and Sigmar Polke who, more than others, have dealt with the complex issues involved in the presumed objectivity of images. But, together with some of the mainstays of European expressionism it is also important to consider the broader scope of interests of Veres Szabolcs, who in recent years has been working on a PhD programme on the grotesque. In this case, together with the artists mentioned there are also some anonymous traditions that have been handed down over the centuries and referred to as “mirabilia”: those of caricature, freak shows, the representation of monsters, irreverent old men or beguiling satyrs. This is the web of atmospheres that emerges from a painting that is never censorious, idealistic or moralistic, and that chases after itself and its own actions as it wanders through the viscera.

Veres Szabolcs (1983, Satu Mare, Romania) lives and works in Cluj-Napoca. His paintings have been shown at MODEM – Center for Modern and Contemporary Art, and at MNAC – National Museum of Contemporary Art, Bucharest. In 2010 the Spencer Brownstone Gallery of New York put on a solo exhibition of his work. Since 2011 he has taught Painting at the Faculty at Art and Design in Cluj-Napoca. This is his first solo exhibition in Italy.
www.prometeogallery.com