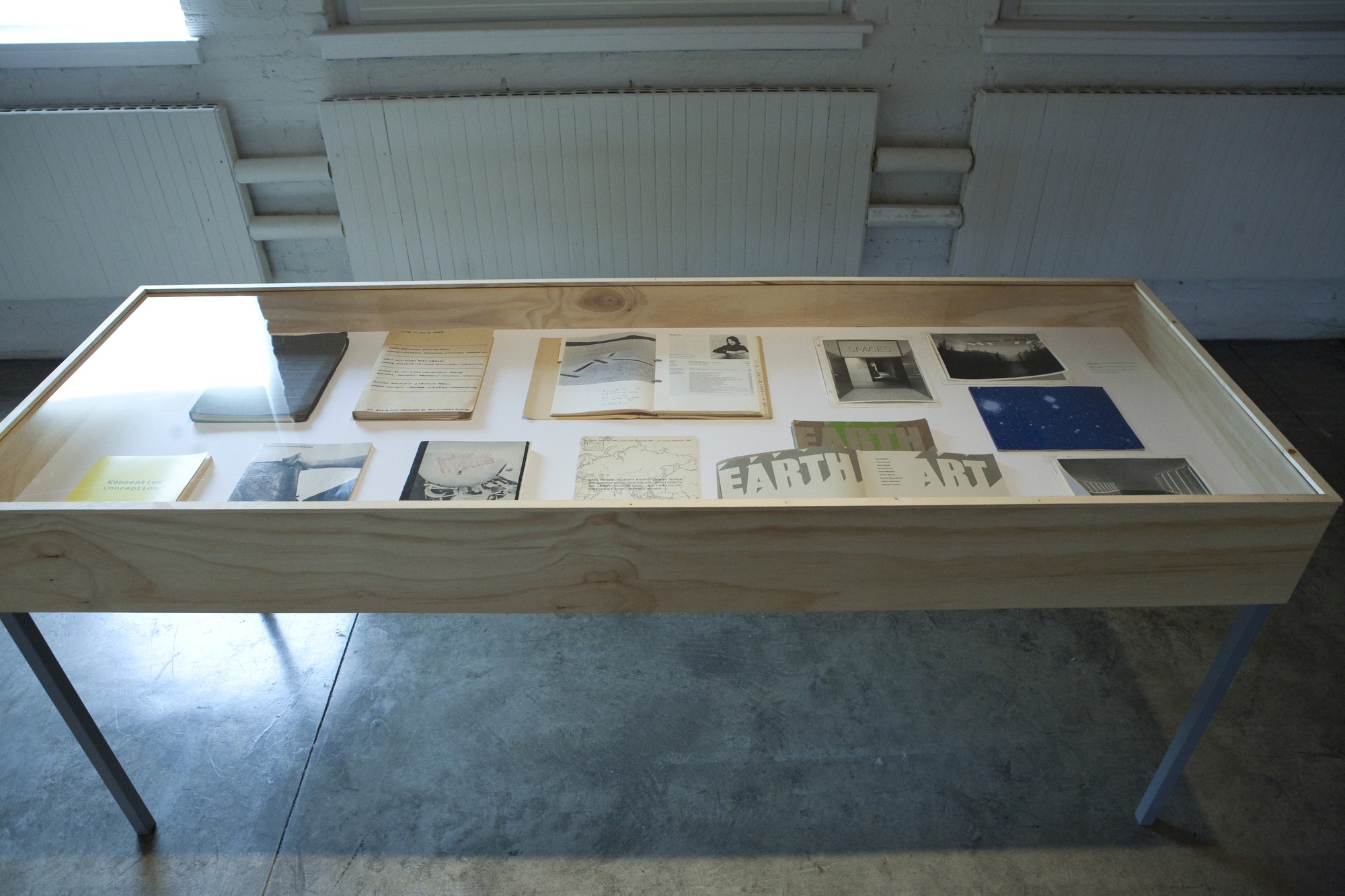 Installation view of vitrines with Museum Archives items included in the exhibition, "1969"
October 25, 2009–April 5, 2010. INPS1.1015.1. Photograph by Sari Goodfriend.
P.S.1 Contemporary Art Center presents 1969, a large scale exhibition occupying the entire second floor with works drawn from every department of The Museum of Modern Art. Exploring a cross section of art made during a period marked with revolution and socio-political tumult, this exhibition also will embrace five interventions by a current generation of artists whose work reflects the concerns of 1969 and brings the exhibition into the present. These younger artists will be given free reign to respond to the works on view and to the time period in general.

1969 is organized by a team of curators representing both institutions and includes MoMA's archivist. One of the questions that shaped this exhibition early on was whether the customary curatorial approach of P.S.1, with its fast-paced process and focus on living artists as well as the rustic architecture of the former schoolhouse, would offer a different visual setting for work ordinarily seen in the minimal white galleries of MoMA. This exhibition includes examples of painting, sculpture, photography, print, illustrated books, design, drawing, media, and film as well as a wealth of documents drawn from MoMA's archives.

Diverse artistic practices, concerns, and themes are presented ranging from the minimalist sculpture of Sol LeWitt and Carl Andre, abstract painting and drawing of Helen Frankenthaler and Gego, to films by Walter de Maria and Michael Snow, and politically charged works of the Art Workers Coalition and Martha Rosler. By exploring a single year, this exhibition is not an attempt to recount the events of 1969, but rather, to present a variety of works made in a single year, each one with its own narrative and point of view. Clearly, the exhibition also outlines MoMA's own collecting history; as such, it is part of a cross-departmental curatorial examination of MoMA's collection with an eye to expanding the range of its holdings from a period when art was being redefined.

Several of the featured works from the collection will be exhibited for the first time, including pieces by major artists like Robert Barry, Mel Bochner, Lutz Mommartz, Bruce Nauman, and John Wesley. In addition, Mel Bochner's room-sized installation, Theory of Painting, marks not only its debut at P.S.1 and MoMA, but the first time it will be realized in New York City. The exhibition will also include new acquisitions of Fluxus works which form part of a recent donation to MoMA from the Gilbert and Lila Silverman Fluxus Collection.

Central to the exhibition is the re-staging of MoMA's 1969 exhibition, Five Recent Acquisitions, organized by noted MoMA curator Kynaston McShine, highlighting then-recently acquired works by Larry Bell, Ron Davis, Robert Irwin, Craig Kauffman, and John McCracken. This exhibition within an exhibition is further contextualized by photographs by Gary Winogrand and Lee Friedlander, among others, in addition to exhibition catalogs, books, and archival documents which depict the events, excitement, and anxieties of the period. By juxtaposing the meditative space of the white cube gallery of the transplanted MoMA exhibition with the tumult of the outside world, 1969 reflects the expansive concerns held by artists of the time. Archival materials document MoMA's relationship with and involvement in the momentous events of the time.

Similar to the presentation of Five Recent Acquisitions, a younger group of artists will create interventions within the galleries that highlight, reflect, and disrupt the collection show. The intervention artworks will speak to themes both present and absent from the exhibition, such as NASA's lunar landing, the legacy of iconic post-war artists like Joseph Beuys and Robert Morris, the rise of collaborative artistic practices, and the cultural and political affects of the Civil Rights movement. The artists acting as commentators are Base, The Bruce High Quality Foundation, Mathew Day Jackson and David Tompkins, Stephanie Syjuco, and Hank Willis Thomas.