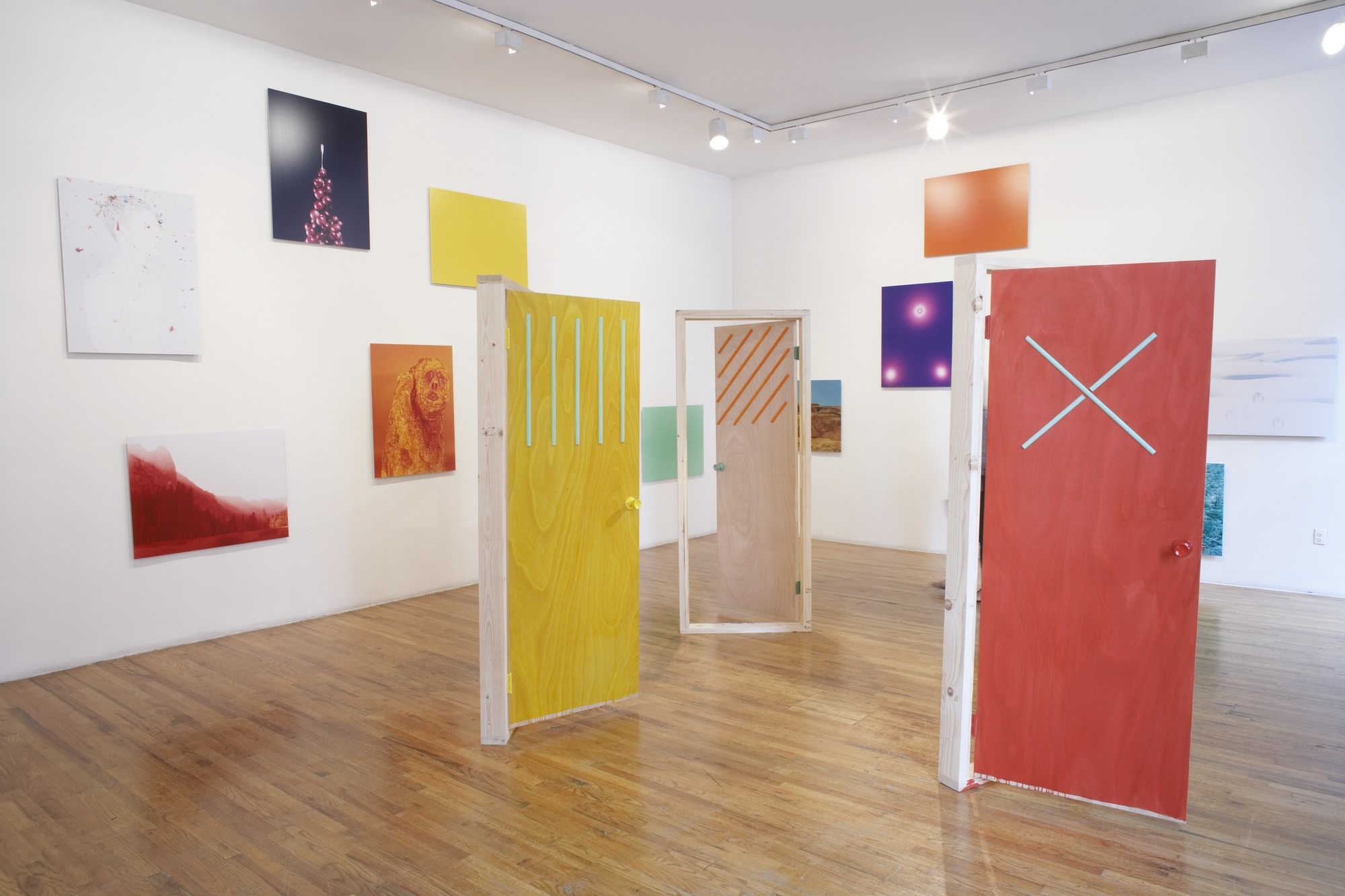 Installation view of GNY: 5 Year Review at MoMA PS1, May 7–October 18, 2010. Photo: Matthew Septimus
Greater New York, the third iteration of the quinquennial exhibition organized by MoMA PS1 and The Museum of Modern Art, showcasing some 68 artists and collectives living and working in the metropolitan New York area, will open at MoMA PS1 on May 23 and run through October 18, 2010. The 2010 exhibition will not only present recent work made within the past five years, but also will foster a productive workshop where artists are invited to experiment with new ideas within MoMA PS1’s building for the duration of the exhibition. Greater New York is organized by Klaus Biesenbach, Director of MoMA PS1 and Chief Curator at Large at The Museum of Modern Art; Connie Butler, The Robert Lehman Foundation Chief Curator of Drawings, The Museum of Modern Art; and Neville Wakefield, MoMA PS1 Senior Curatorial Advisor.

Covering a full range of practices and media, the artists in Greater New York are inspired by living in one of the most diverse and provocative centers of cultural activity in the world. The exhibition centers largely on the process of creation and the generative nature of the artist’s studio and practice. A number of artists have been commissioned to work in residence in MoMA PS1’s gallery space to shoot photographs and video, rehearse and realize performances, and stretch the notions of sculpture, painting, photography, film, and video-making.

New large-scale installations and artist commissions were produced for the exhibition. Monumental pieces like Hank Willis Thomas’ Unbranded series appear, which is showcased for the first time in its complete version in New York City, along with Sharon Hayes’ Revolutionary Love: I Am Your Worst Fear, I Am Your Best Fantasy, being shown in its first full-length exhibition iteration. Varying interests and concerns emerge throughout the exhibition’s diverse presentation.

Spanning a broad variety of artistic processes and practices today, the works in Greater New York range from explorations in color and form, to examinations of ecological, geopolitical, and sociological interests, to meditations on race, gender, and generational identifications, to discussions of recent trauma and the building boom in New York.

David Brooks has displaced a section of a simulated tropical rainforest into the MoMA PS1 Duplex Gallery, only to “preserve” the forest by encasing it in concrete, as a visceral confrontation demonstrating today’s ecological threats. Lucy Raven is similarly involved with concepts of exchange and globalization in her physical and photographic tracing of copper wire manufacture routes from the mines of Nevada all the way to smelters in China in a work whose final presentation is formed from a sped-up animation of 7,000 still photographs that investigate what it is to be “wired.” The artist collective Atlas of Radical Cartography also makes use of “mapping” procedures to visualize some of today’s pressing questions, and the artist collective DETEXT further interrogates ideas of electronic communication and exchange with their conceptual text pieces that appropriate the content of everyday spam messages. The Bruce High Quality Foundation also engages with notions of supplanting and exchange with their commission to develop an “art pedestal exchange program”, a seemingly minimal installation that groups beautifully refined new “art pedestals” that will be offered to art schools in exchange for their old worn pedestals. Over the course of the exhibition what began as a pristine white installation will transform into an amalgam of used exhibition furniture.

The Delusional Downtown Divas (Joana Avillez, Lena Dunham, and Isabel Halley) were commissioned to produce a new episode of their ongoing video series, and Guido van der Werve will create an orchestra performance premiering at MoMA PS1 over the weekends of Oct. 2nd and 9th. Artists such as Ei Arakawa and robbinschilds will offer open studios to the general public and collaborations with a selected group of invited artists on numerous scheduled days.

Many of the artists in Greater New York have on view a group of representative works, as if each were mounting a small solo show. Others collaborated productively to create new and unique room installations that make use of MoMA PS1’s varied, architecturally nuanced spaces. Leading up to the opening of Greater New York, artists including Franklin Evans, Dani Leventhal, and Kalup Linzy utilized MoMA PS1 as studio space to create new work on-site. This sort of artistic production will be ongoing throughout the exhibition in locations like the Boiler Room, where Aki Sasamoto invited the artist Saul Melman to collaborate. Throughout the exhibition, Saul Melman will be continuously gilding the old, original boiler of the MoMA PS1 former school building. MoMA PS1 will offer additional studio space and performance support and staging throughout the Greater New York exhibition. Please see attached performance schedule.

Nico Muhly has composed a piece presented as a sound installation in MoMA PS1’s elevator based on the imagery of Greater New York, and Ryan McNamara will use the duration of Greater New York to invite famous and lesser-known dancers to teach him how to professionally dance. Emily Roysdon opens the exhibition with the nearly invisible wallpaper print saying Who Am I To Feel So Free to give the exhibition a thoughtful and nearly ironic starting point entering as visitors enter the MoMA PS1 lobby, where Xaviera Simmons has mounted a photo installation for Greater New York that visualizes fugitives onboard boats out in the open ocean, after having left, but before arriving.

The Greater New York 2010 curators selected artists through studio visits, review of recommendations, mailed submissions, and through Studio Visit, a new initiative on www.MoMAPS1.org that invites artists to present their artwork and studios online. Over 750 Studio Visit submissions were reviewed by the curatorial team. Greater New York 2010 is meant to be an inclusive, artist-driven exploration of New York City now.

MoMA PS1's First Floor Painting Gallery will be dedicated to 5 Year Review, a showcase of some of the most important exhibitions, performances, concerts, movies, fashion, design, happenings, and events to have occurred in the past half decade. Rather than a comprehensive history of art and culture in the New York area, 5 Year Review will instead reflect the idiosyncratic nature of individual taste and memory as recommended by an invited group of fellow curators and critics.

A series of performances and public programming generated by participating Greater New York artists will also take place in the Painting Gallery. These performances will be scheduled throughout the exhibition to explore the recent proliferation of process-oriented art and ephemeral forms of practice that are currently influential in New York and internationally.

The basement level Vault will be transformed into a movie theater for screenings of films and video. Film curators Thomas Beard and Ed Halter, cofounders of Light Industry, Brooklyn, have been invited to program the theater with an ongoing presentation of narrative films and special screenings.

A catalog will be published by MoMA PS1 for Greater New York 2010, documenting recent trends, processes, and media explored in the exhibition and featuring work by each of the exhibition's 68 artists and collectives, documenting the installation at MoMA PS1, with an accompanying curatorial essay written by curators Klaus Biesenbach, Connie Butler, and Neville Wakefield. ISBN 978-0-9841776-2-2. Paperback. U.S. $19.00. CDN $23.00. Publication date: August 2010.

MoMA/MoMA PS1's Inside/Out blog (www.moma.org/explore/inside_out) will feature a series of topical posts and interviews with MoMA PS1 curators, guest curators, and artists featured in the exhibition.

The exhibition is made possible by The Andy Warhol Foundation for the Visual Arts, The Horace W. Goldsmith Foundation, MoMA’s Wallis Annenberg Fund for Innovation in Contemporary Art through the Annenberg Foundation, the Julia Stoschek Foundation, Jerry I. Speyer and Katherine G. Farley, the Jacques and Natasha Gelman Trust, and the MoMA PS1 Board of Directors.

Additional funding is provided by Franny Heller Zorn and Richard L. Zorn and by The Student Body of MoMA PS1.

The accompanying publication is made possible by The International Council of The Museum of Modern Art.