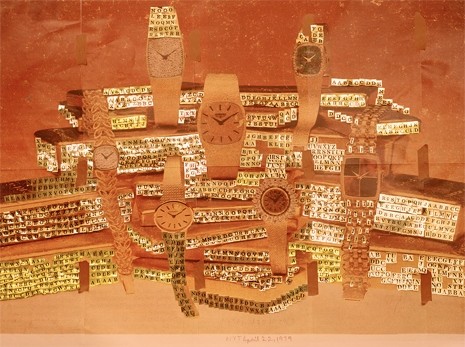 Sara Cwynar
Gold - NYT April 22, 1979 (Alphabet Stickers), 2013
MoMA PS1 presents the fourth iteration of its landmark exhibition series, begun as a collaboration with The Museum of Modern Art in 2000. Recurring every five years, the exhibition has traditionally showcased the work of emerging artists living and working in the New York metropolitan area. Greater New York arrives in a city and art community that has changed significantly since the first version of the survey. With the rise of a robust commercial art market and the proliferation of art fairs, opportunities for younger artists in the city have grown alongside a burgeoning interest in artists who may have been overlooked in the art histories of their time. Concurrently, the city itself is being reshaped by a voracious real estate market that poses particular challenges to local artists. The speed of this change in recent years has stoked a nostalgia for earlier periods in New York—notably the 1970s and 1980s, and the experimental practices and attitudes that flourished in the city during those decades. Against this backdrop, Greater New York departs from the show’s traditional focus on youth, instead examining points of connection and tension between our desire for the new and nostalgia for that which it displaces.

Considering the “greater” aspect of its title in terms of both geography and time, Greater New York begins roughly with the moment when MoMA PS1 was founded in 1976 as an alternative venue that took advantage of disused real estate, reaching back to artists who engaged the margins of the city. Together, the works in the exhibition employ a heterogeneous range of aesthetic strategies, often emphatically representing the city’s inhabitants through forms of bold figuration, and foregrounding New York itself as a location of conflict and possibility.

Peter Eleey joined MoMA PS1 as its Curator in 2010, and became Associate Director of Exhibitions and Programs in 2013. Eleey has organized 20 exhibitions at the museum, including premiere presentations of Ed Atkins, Darren Bader, and Matt Connors, as well as acclaimed surveys of Huma Bhabha, James Lee Byars, Simon Denny, Lara Favaretto, George Kuchar, Thomas Lanigan-Schmidt, and Maria Lassnig. Sturtevant: Double Trouble opened last fall at The Museum of Modern Art and traveled to the Museum of Contemporary Art, Los Angeles. He also curated September 11, a group exhibition organized on the occasion of the tenth anniversary of the terrorist attacks in 2011, and oversaw MoMA PS1's expanded presentation of Mike Kelley in 2013, which was the largest solo exhibition in the institution’s history. Eleey previously served as a curator at the Walker Art Center and Creative Time.

Douglas Crimp is Fanny Knapp Allen Professor of Art History at the University of Rochester and the author of On the Museum’s Ruins, 1993; Melancholia and Moralism: Essays on AIDS and Queer Politics, 2002; and “Our Kind of Movie”: The Films of Andy Warhol, 2012. Crimp was the curator of the Pictures exhibition at Artists Space, New York, in 1977 and an editor of October magazine from 1977 to 1990. With Lynne Cooke, he organized the exhibition Mixed Use, Manhattan: Photography and Related Practices 1970s to the Present for the Reina Sofía in Madrid in 2010. His forthcoming memoir Before Pictures will be co-published in 2016 by Dancing Foxes Press and the University of Chicago Press.

Thomas J. Lax is Associate Curator of Media and Performance Art at The Museum of Modern Art, where he recently organized Steffani Jemison: Promise Machine (2015). Other upcoming projects include Maria Hassabi: PLASTIC (2016); Projects 102: Neïl Beloufa (2016); and a publication on the work of Ralph Lemon (2016). Previously, he was Assistant Curator at The Studio Museum in Harlem, where he organized When the Stars Begin to Fall: Imagination and the American South (2014); Radical Presence: Black Performance in Contemporary Art (2013), a traveling exhibition curated by Valerie Cassel Oliver; and Fore (2012), co-organized with Lauren Haynes and Naima J. Keith.

Mia Locks is Assistant Curator at MoMA PS1, where she has organized exhibitions including Math Bass: Off the Clock (2015); IM Heung-soon: Reincarnation (2015); Samara Golden: The Flat Side of the Knife (2014); and The Little Things Could Be Dearer (2014). Before joining MoMA PS1, Locks organized Cruising the Archive: Queer Art and Culture in Los Angeles, 1945-1980 (2012), with David Frantz, at ONE National Gay & Lesbian Archives as part of the Getty’s Pacific Standard Time initiative. She previously worked at the Museum of Contemporary Art, Los Angeles (MOCA), where she helped to organize Blues for Smoke (2012) and Bob Mizer and Tom of Finland (2013), both with Bennett Simpson.

Mark Beasley is a British curator and writer based in New York. He has served as a curator for Performa, working with artists including Florian Hecker, Ed Atkins, Tori Wranes, Frances Stark and Mark Leckey, Robert Ashley, Arto Lindsay and Mike Kelley. With Kelley, he curated the experimental music festival A Fantastic World Superimposed on Reality (2009) and at MoMA PS1 organized a series of performances in conjunction with the retrospective exhibition of his work in 2013. As a curator at Creative Time he organized This World & Nearer Ones (2009); Hey Hey Glossolalia: Exhibiting the Voice (2008); and Javier Tellez’s critically acclaimed film A Letter on the Blind (2008).

Jenny Schlenzka is Associate Curator at MoMA PS1, where she oversees live programs. She has commissioned projects by artists including Trajal Harrell, Ragnar Kjartansson, Marten Spångberg, and Anne Imhof, and organized MoMA PS1’s presentation of Retrospective by Xavier Le Roy (2014). From 2008-2012 she was Assistant Curator for Performance in the Department of Media and Performance Art at The Museum of Modern Art, where she co-organized the Performance Exhibition Series.

Major support for Greater New York is provided by MoMA’s Wallis Annenberg Fund for Innovation in Contemporary Art through the Annenberg Foundation.

Special thanks to Elham and Tony Salamé.
www.momaps1.org