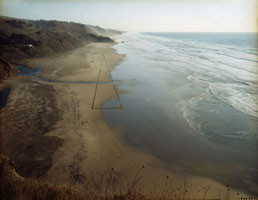 Jim Denevan/Ari Marcopoulos, Untitled III, 2007, 48" x 60", Digital C print, Courtesy the artists
P.S.1 Contemporary Art Center presents the work of eight artists as part of the summer 2007 cycle of the International and National Projects program. Featuring new and recent works by an intergenerational group of artists, these solo exhibitions showcase a range of media, including video, photography, sculpture, and installation. The International and National Projects open on June 24, 2007.

Victor Alimpiev assumes the isolated viewpoint of an observer in order to capture both spontaneous and controlled nuances of human expression and behavior. In the video Sweet Nightingale (2005), a vast examination of uniformity and difference, a crowd performs a sequence of gestures choreographed to the music of Gustav Mahler. Deer (2002), with Sergey Vishnevsky, is a love story of devotion and detachment saturated with color and tactility. In Summer Lightnings (2004), schoolgirls synchronize percussion with an undulating summer storm. These works measure the subtle beauty, pain, and complacency of the individual in society.

Jim Denevan and Ari Marcopoulos work in tandem to produce large scale color photographs of geometric drawings delineated freehand on a stretch of beach in northern California. Using a stick and sometimes a rake, Denevan paces the beach at low tide making marks in the sand -- rows of parallel lines that form a spiral or a series of interlocking circles. In one of his drawings, a line extends for a mile. Situated on top of a steep cliff overlooking the beach, Marcopoulos shoots these drawings, often during the process of their making. His panoramic photographs capture the ephemeral presence of Denevan's vast configurations in the landscape before they are eradicated by the tide.

Jim Denevan (b.1961) and Ari Marcopoulos (b.1957), who share an interest in boarding, met and became friends early in 2007. A skim boarder, surfer, artist, and chef, Denevan recently exhibited photographs of his earth drawings at the Yerba Buena Center for the Arts in San Francisco. A snow boarder, Marcopoulos has shown his photographs and films in numerous exhibitions in the U.S. and abroad. Well known for his portraits of artists, musicians, and snow boarders, Marcopoulos' most recent subject is his family.

Gandalf Gavan creates sculptural installations that combine uniform modules associated with Minimalism and gestural movement associated with Abstract Expressionism. Gavan is well known for his hand-blown glass works, presented in cities around the world. In the last three years, he has gradually taken his outdoor installations to indoor spaces, while focusing increasingly on site-specific elements. For P.S.1's cafe Gavan will create an installation of neon lights and anamorphic mirrors that investigates the collision of lyrical forms and fleeting images.

Gandalf Gavan (b. 1975) was born in Berlin and has lived in Mexico, Peru, California and New York. He received his BFA from Bard College and his MFA from Columbia University. Gavan has had solo exhibitions at Bertrand & Gruner, Geneva; Larissa Goldston Gallery, New York; and Museo de Arte Contemporaneo Oaxaca, Mexico. He has also participated in group exhibitions such as Curvaceous at Andrea Rosen Gallery, New York, and Escape from New York at Curators without Borders in Berlin.

In P.S.1's third floor hallway, Jonathan Hartshorn presents the mixed media installation, When Skies Are Grey (2007), which includes drawings and found objects like the artist's family photographs, a map of the United States, an imitation wood clock, and a note from his father. Best known for his works on paper, Hartshorn's poetic juxtapositions of graphite sketches and found material extend beyond biography. Hartshorn says, "My work attempts to show an awareness of the tension between the personal and impersonal in regards to an object's relevance or irrelevance."

Jonathan Hartshorn (b. 1976) has exhibited his work nationally, including solo exhibitions at Feature Inc., New York; John Sommers Gallery and Trevor Lucero, both in Albuquerque. In 2005 he earned his BFA at the University of New Mexico. Hartshorn lives and works in New York and Albuquerque.

This exhibition is organized by P.S.1 Director Alanna Heiss.

For her P.S.1 project, Molly Larkey presents "The Believers," a new series of sculptures that combine abstraction and figuration to comment on political and social ideologies. Her 2007 sculpture, which shares the same title, consists of candy-colored horizontal and vertical elements evoking a religious cross, minimalist grid, and medieval torture device. As in her previous work, Larkey is interested in the boundaries that separate the individual and the world. The series explores how ideology intersects with personal identity and how belief can act as a wide ranging agent-one of exclusivity, violence, spiritual transcendence, and social change.

Molly Larkey (b. 1971) was born in Los Angeles and has been exhibiting her artwork since 1996. She received her MFA from Rutgers University in 2000 and has had solo exhibitions at Artists Space and P.S. 122 Gallery, both in New York. Larkey has been featured in numerous group exhibitions at such galleries and institutions as The Drawing Center, New York; Samson Projects, Boston; and Bobbie Greenfield Gallery, Santa Monica. She lives and works in Brooklyn, NY.

This exhibition is organized by P.S.1 Curatorial Advisor Franklin Sirmans.

Prema Murthy's installation "Fuzzy Logic" combines digital technology with a handicraft aesthetic to explore the possibilities of placing lines in space. Black yarn knotted at intervals delineates a multi-faceted crystalline structure that is accompanied by black-and-white digital drawings depicting similar angular forms. All of the drawings contain a fragment of a larger network of lines that could continue ad infinitum. Although seemingly inflected by the artist's hand, the drawings are produced with the aid of several software programs. With references ranging the infinite space of undiscovered galaxies to the unplumbed depths of the psychic landscape, her installation probes some of the myriad possibilities presented by merging of technology and tradition.

Based in New York, Murthy (b.1969) received her MFA from Goldsmiths College, London. She has exhibited her video, digital prints, and installation in numerous exhibitions in the U.S. and abroad including the Reina Sofia Museum in Madrid, the Generali Foundation in Vienna, The National Gallery in Capetown, The India Habitat Center in New Delhi. The Queens Museum, and the New Museum of Contemporary Art in New York. She is the co-founder of the collective Fakeshop, which was included in the 2000 Whitney Biennial.

This exhibition is organized by P.S.1 Director Alanna Heiss.

Prema Murthy is made possible by Marguerite and Kent Charugundla.

Adam Putnam has erected a gritty concrete obelisk that casts its shadow into the vortices of four projected corridors. These interiors mine the archives of personal memory and collective imagination. The familiar form of a monument is relocated to a non-place or vacuum of the cognitive traces one has left behind. Unwittingly, shared architectural geometries-rounded angles, sharp thresholds, checkerboard floors, and generic wallpaper patterns-are sites of distinct physical contact and an intimate part of growing up. Presence and absence are relative where the outside of bodies meet the inside of rooms.

Adam Putnam (b. 1973) exhibited at Taxter & Spengemann in New York this spring and has exhibited at Andrew Kreps in New York, and Sandroni Rey in Los Angeles. His work can currently be seen in Between the Two Deaths at ZKM, Karlsruhe. Previous group exhibitions include: The Rabbit as King of the Ghosts, Mitchell-Innes & ash, New York; Uncertain States of America, The Astrup Fearnley Museum for Modern Art, Oslo, The Center for Curatorial Studies, Bard College, and Serpentine Gallery, London; Plain of Heaven, Creative Time and Friends of the Highline, New York. Putnam received his MFA from Yale University in 2000 and his BFA from Parsons School of Design in 1995. He lives and works in New York.

This exhibition is organized by Klaus Biesenbach, P.S.1 Chief Curatorial Advisor and Chief Curator, Department of Media, The Museum of Modern Art.

International and National Projects are supported in part by The Jerome Foundation.