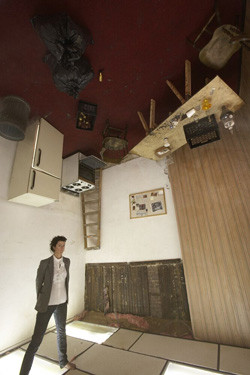 Lisa Kirk, 2007, Installation View. Photo by Matthew Septimus.
P.S.1 Contemporary Art Center presents the work of eight artists as part of the Fall 2007 cycle of the International and National Projects program. Featuring new and recent works by an intergenerational group of artists, these solo exhibitions showcase a range of media, including film, photography, sculpture, paintings and installation. The International and National Projects will be on view from October 21, 2007 through January 14, 2008.

Eyal Danieli's drawings of the last two decades are distilled from his experiences with political conflict while growing up in Israel. Utilizing a recurring motif of helicopters, tanks and military camouflage, Danieli’s work recalls other socially concerned painters such as Leon Golub. His aim is not only to reveal the inherent violence of war, but to challenge our predisposed sense of morality, and the assumption that we can easily separate fact from fiction.

Eyal Danieli (b. 1961, Pittsburgh, Pennsylvania) has been exhibiting his work since 1997. He had solo exhibitions at A.R.T. Inc, Herbert Lust Gallery, and Virginia Lust Gallery, all in New York. Danieli’s work has been featured in group exhibitions at the International Print Center, New York; Islip Art Museum, East Islip, New York; Martin Kudlek Gallery, Cologne, Germany; and other institutions. He lives and works in New York.

In her first U.S. show Manon de Boer exhibits the 35mm film Presto. Perfect Sound (2006) which depicts composer and violinist George Van Dam performing the fourth movement of a Bartók violin sonata. As in any professional sound recording, Manon de Boer recorded several different takes of one and the same movement. In order to achieve the "perfect" soundtrack, she edited together five different takes using the part of the recording that was deemed technically and artistically the finest. Afterwards, de Boer synced the composite film images to the final soundtrack. As a result, we hear a seamless performance that is paired with an assembly of incoherent images.
De Boer's film is a reflection on the relationship between image and sound. By having the soundtrack dictate the sequence of images, she challenges the dominance of image over sound in traditional cinema.

This exhibition is organized by Susanne Pfeffer, P.S.1 Curatorial Advisor and Curator at KW Institute for Contemporary Art.

In P.S.1's Second Floor Corner Gallery, Shannon Ebner presents works from two series of black-and-white photographs, to be displayed on tables. The first body of work, Untitled, treats light and space abstractly as it marks and shifts one's perceptions of various surfaces. For the Fire Bottles series (2002–2004), Ebner made photos in the Sierra Nevadas after large forest fires swept through the region. Focusing on discarded glass bottles, she photographed their surfaces, investigating how light reflected and refracted off of them—or as the artist puts it, by "allowing the objects to direct their piercing and violent gaze back at the photographer."

Shannon Ebner (b. 1971, Englewood, New Jersey) received her MFA from Yale University in 2000 and has been exhibiting her work since 1998. She has had solo exhibitions at Wallspace, New York, and Margo Victor Presents, Los Angeles. Her work has also been featured nationally and internationally, at institutions including Tate Modern and Serpentine Gallery, London; Expodium, Utrecht; LACE, Los Angeles; and High Museum of Art, Atlanta. Shannon Ebner lives and works in Los Angeles, California.

The inspiration for Tony Fitzpatrick's collages is culled from his daily interactions in his home city of Chicago. Fitzpatrick begins each collage by drawing or painting central elements and then incorporating various found materials. Featured works in the exhibition are from the artist's book The Wonder: Portraits of a Remembered City.

Tony Fitzpatrick's work is included in the collections of the Art Institute of Chicago, the Museum of Modern Art in New York, the National Museum of American Art in Washington, D.C., the Museum of Contemporary Art in Miami, and the Philadelphia Museum of Art.

For the past twenty years, Queens-born photographer Anders Goldfarb has documented the neighborhoods of Williamsburg, Greenpoint, and Long Island City. This selection of 72 photographs represents a fraction of a much larger body of work. Similar to Robert Frank and his predecessors, particularly photographers Walker Evans and Eugène Atget, Goldfarb shares their skeptical though affectionate views of the working class and bohemian life. Recording everyday life and surveying changes in his beloved New York City, his photographs chronicle now-vanished or gentrified streets and buildings.

Anders Goldfarb (b. 1954, Brooklyn, New York) has been exhibiting his work since 1986. He has had a recent solo exhibition at OK Harris Gallery, New York and has been featured at the Brooklyn Museum, Queens Museum of Art, Artists Space, and Safe-T-Gallery, all in New York; Smithsonian Building Museum, Washington, DC; and Staton-Greenberg Gallery, Santa Barbara. His photographs are in numerous public collections, including the Brooklyn Historical Society, The New York Public Library, and Samuel Dorsky Museum. Goldfarb lives and works in Brooklyn, New York.

Lisa Kirk presents an installation featuring her custom-made perfume, REVOLUTION!. The perfume contains odors of smoke, gasoline, tear gas, burnt rubber, and decaying flesh and acts as an olfactory critique on contemporary luxury branding and political im/possibilities. A glass door seals off Kirk's adjacent installation, Time Suspended, in which the transformed space detailed with Molotov cocktails, peeling wallpaper and a laboratory, is turned upside down as the imagined production site of the fragrance REVOLUTION!.

Lisa Kirk (b.1967) has been exhibiting her work since 1998. She received her MFA from UC Irvine in 1992 and has had solo exhibitions at Galleria Commercial, Puerto Rico; Participant Inc., New York; Lemoyne Kennels, California; and other galleries. She has been curating exhibitions since 1996. Kirk lives in New York.

Diana Puntar (b. 1967, Queens, New York) has had solo exhibitions at Participant Inc., New York; rowland contemporary, Chicago, Illinois; and Small A Projects, Portland, Oregon. She has also exhibited in group shows such as The Raw and The Cooked at The University of Massachusetts, Amherst; Culture Vulture at Jack the Pelican, Brooklyn, New York; GEO at Foxy Production, New York; Irrational Exuberance at Stefan Stux Gallery, New York; New Slang at Luhring Augustine Gallery, New York; Transience and Sentimentality at The Institute of Contemporary Art, Boston; and Guido Carbone, Turin, Italy. She was an artist-in-residence at Artomi, Yaddo, The Millay Colony and The McColl Center for the Arts. Puntar lives and works in Brooklyn, New York.

Andreas Zybach presents his 2005 installation Sich selbst reproduzierender Sockel (Self-reproducing Pedestal). Comprised of clusters of inflated balloons sandwiched between a wooden latticework, the piece invites viewers to walk on its air-filled structure. With each step, an attached air pump inflates another balloon that is eventually added to the installation, causing it to grow as if it were reproducing on its own. Like Piero Manzoni's pedestal and pneumatic works, Zybach's installation draws connections between biological processes and art.

Zybach (b. 1975, Olten, Switzerland) has been exhibiting his work since 2001. He has had solo exhibitions at institutions including Johann König, Berlin; Aargauer Kunsthaus, Aarau; and Schnittraum, Cologne. Zybach has also exhibited his work at the Guggenheim Museum, Bilbao; Victoria Miro Gallery, London; and in the 2006 Busan Biennale.

International and National Projects are supported in part by The Jerome Foundatio
www.momaps1.org