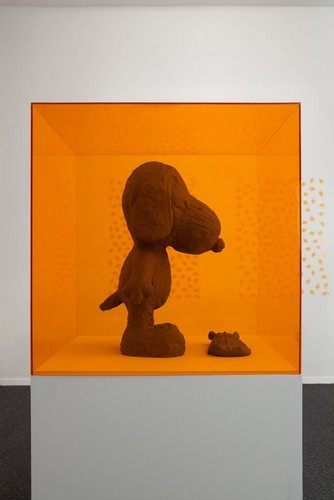 © Michael Joaquin Grey
Installation view at P.S.1, 2009
Photo: John Berens. Courtesy bitforms gallery nyc
P.S.1 Contemporary Art Center presents a solo presentation by Michael Joaquin Grey, an artist whose work has bridged the boundaries between art, science, media, and the imagination for the last twenty years. His interdisciplinary practice revolves around the development and origins of life and language, as well as morphology. The self organizing principles of living and nonliving things, from muscle cells up to cultural phenomena, are among the diverse concerns that Grey's work examines. Featuring wall vinyl, computational videos, sculptures, and prints, the exhibition investigates critical moments in natural phenomena and culture with a nearly scientific eye, all the while testing the very limits and boundaries of the tools required in such study.

On view in P.S.1's first floor Drawing Gallery are works that thematically demonstrate the artist's interest in the development of language, living things, and strategic organic systems. Many works relate to the principles of growth and transformation, as seen in Object as preposition (1988-2007) which visualizes how throughout art history the object became part of a performative process in relational aesthetics. Body signals are a recurrent theme; the human heartbeat is used in Perpetual ZOOZ (2005-09), as well as the artist's own biological material in Artificial Muscle (1983-2001), where a sample of Grey's muscle cells is used to create a contracting mass in a test tube.

The computational cinematic projection Perpetual ZOOZ is the primary work in the exhibition, which incorporates two versions of The Wizard of Oz. One version of the movie plays in time with his mother's heartbeat and the other plays in reverse, in accordance with Grey's heart. The projection is designed in a way that both versions of the movie are presented in a sculptural form, like two sides of a spinning coin.