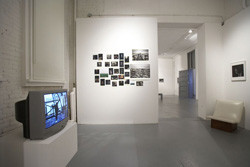 Installation view. Photo: Matthew Septimus
P.S.1 Contemporary Art Center presents an exhibition of acclaimed Butoh master Min Tanaka. Featuring approximately 75 black-and-white and color photographs taken by photographer Masato Okada over thirty years, the images reveal the power and lyricism of one of the pioneers of the Japanese dance form. Min Tanaka: Photos by Masato Okada 1975-2005 is on view in the Archive Galleries from October 21, 2007 through February 4, 2008. In conjunction with the performance biennial Performa07, Tanaka gave a series of special, live performances in and around P.S.1 from November 16 − 18. There was also a special performance on Friday, November 16 at 2 pm at The Museum of Modern Art, 11 West 53rd Street.

For three decades, Tanaka and Okada have been active collaborators, in which the former artist at times seemingly moves to the rhythm of the latter’s clicking shutter. This exhibition includes images of Tanaka’s indoor and outdoor performances, which often occurred in unexpected places—many of which were suggested by Okada. From the garbage dump on Dream Island in Tokyo Bay to the snow-capped mountains of Tokason in Yamanashi Prefecture, Tanaka incorporates his body into the surrounding environment and also draws the landscape into what the artist refers to as his own world of “interior movements." Speaking of the mountain performances, Tanaka recalls, “I had no plan at all for how to dance. The only thing that was decided was that I would ‘dance’ and Okada would ‘take pictures.’ It all depended on the weather and mood of the day.”

Inspired by the teachings of Butoh founder Tatsumi Hijikawa, Min Tanaka (b. 1945, Tokyo, Japan) established the Body Weather Laboratory in 1978 where he first developed nude dance projects such as the Hyperdance and Drive series. That November, exactly thirty years ago, Tanaka embarked on his first-ever overseas tour in which P.S.1 played a crucial role in his artistic development by hosting his legendary performance on the snow-covered rooftop of the Clocktower Gallery. This led to his subsequent artistic collaboration with Richard Serra, John Cage, Cecil Taylor, Karel Appel, Meredith Monk, and Susan Sontag. Tanaka’s performances have been critically praised in Japan and abroad, and today he is a highly acclaimed, influential dancer, choreographer, and actor. In 2006, Tanaka suspended his stage performances and shifted to a series of anonymous dances called Locus Focus, which took place in streets, parks, schools, fields and seashores in Japan, Indonesia, Spain and China. His appearance in New York will be the U.S. debut of this latest performance series.

Masato Okada (1949–2006) photographed Tanaka’s dances ever since the two first met in 1975. Among the numerous projects, he documented Tanaka’s 1824-hour Hyperdance, in which over 150 locations in fields, scenic spots, and towns were used as sites for performance. While planning a major exhibition of the Tokason dance series, the photographer was diagnosed with liver cancer. Okada passed away days after the exhibition took place in March 2006.

Min Tanaka: Photos by Masato Okada 1975-2005 is organized by P.S.1 International Adjunct Curator Kazue Kobata in collaboration with Sumie Tanabe, editor of the catalogue Between Mountain and Sea, 2006.

The exhibition is supported by the Masato Okada Estate, the Asian Cultural Council, and The Japan Foundation.
www.momaps1.org