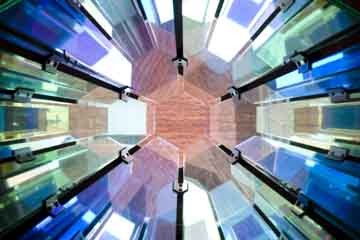 Take your time: Olafur Eliasson Will Be Presented at MoMA and P.S.1, and Will Include New Installations on View for the First Time

NEW YORK, January 17, 2008—Take your time: Olafur Eliasson is the first comprehensive survey in the United States of works by Olafur Eliasson, whose large-scale immersive environments, installations, sculptures, and photographs elegantly recreate the extremes of landscape and atmosphere in his native Iceland, at the same time as they foreground the sensory experience of the work itself. Drawing from public and private collections worldwide, the exhibition will include 34 works that explore Eliasson’s diverse range of artistic production from 1991 to the present, including six new works created specifically for The Museum of Modern Art and P.S.1 Contemporary Art Center. Eliasson recontextualizes elements such as light, water, ice, fog, stone, and moss to create unique situations that shift the viewer’s perception of place and self. By transforming the gallery into a hybrid space of nature and culture, Eliasson prompts an intensive engagement with the world and offers a fresh consideration of everyday life. The exhibition will be on view at The Museum of Modern Art and at P.S.1 Contemporary Art Center from April 20 through June 30, 2008.


The exhibition is organized by Madeleine Grynsztejn, former Elise S. Haas Senior Curator of Painting and Sculpture at the San Francisco Museum of Modern Art (SFMOMA), where the exhibition originated and where it will remain on view through February 24, 2008. In New York, it is coordinated and expanded by Klaus Biesenbach, Chief Curator, Department of Media; and Roxana Marcoci, Curator, Department of Photography, The Museum of Modern Art.


Other major works in the exhibition include Moss wall (1994), an installation of live reindeer moss that will naturally change color throughout its time on view in MoMA’s third-floor Special Exhibitions Gallery, and Ventilator (1997), an electric fan suspended from the ceiling of MoMA’s Donald C. and Catherine Marron Atrium, which soars 110 feet above street level. The fan will swing above the heads of visitors in ever-changing arcs—a striking representation of unpredictable movement through space.
At P.S.1, installed in the downstairs Duplex gallery, Reversed waterfall (1998) consists of a large, four-tiered scaffolding, with fonts on each level that direct water upwards, reversing its gravitational flow. Reversed waterfall, an early example of Eliasson’s experiments in this format, will remain on view at P.S.1 through September.

ABOUT THE ARTIST:
Eliasson (born 1967 in Copenhagen, Denmark, and raised in Denmark and Iceland) trained at Copenhagen’s Royal Danish Academy of Arts, where he was influenced by California’s Light and Space movement. Examples of his work reside in major collections worldwide, including those of SFMOMA; The Museum of Modern Art, New York; the Solomon R. Guggenheim Museum, New York; the Museum of Contemporary Art, Los Angeles; the Centre Pompidou, Paris; the Hirshhorn Museum and Sculpture Garden, Smithsonian Institution, Washington, DC; and Tate Modern, London. Eliasson, who represented Denmark at the 2003 Venice Biennale, lives and works in Berlin and Copenhagen.

ABOUT THE CURATORS:
Klaus Biesenbach, Chief Curator, Department of Media, has organized many exhibitions at MoMA and at P.S.1. At MoMA, he co-organized Doug Aitken: sleepwalkers (2007), and organized Douglas Gordon: Timeline (2006). At P.S.1, he organized Fassbinder: Berlin Alexanderplatz (2007), Into Me/Out of Me (2006), Mexico City: An Exhibition About the Exchange Rate of Bodies and Values (2002), Loop (2001), and Disasters of War (2000), all of which traveled internationally, and co-organized Greater New York (2000 and 2005). Mr. Biesenbach is the founding director of KW (Kunst-Werke) Institute for Contemporary Art in Berlin, where he organized numerous projects with artists, including Dan Graham, Carsten Höller, Taryn Simon, and Paul Pfeiffer, among others. He served as a member of the international jury of the Venice Biennale in 1997. He co-organized the Shanghai Biennial (2002), the berlin biennial (1998), and Hybrid Workspace at documenta X (1997).

Roxana Marcoci, Curator, Department of Photography, has organized many exhibitions at MoMA including Projects 85: Dan Perjovschi—WHAT HAPPENED TO US? (2007); Comic Abstraction: Image-Breaking, Image-Making (2007); New Photography 2006: Jonathan Monk, Barbara Probst, Jules Spinatsch (2006); the retrospective Thomas Demand (2005); Projects 82: Mark Dion—Rescue Archaeology (2004); Projects 80: Lee Mingwei—The Tourist (2003); Projects 73: Olafur Eliasson—seeing yourself sensing (2001); and Counter-Monuments and Memory (2000). She is also the curator of the survey exhibition Here Tomorrow (Museum of Contemporary Art, Zagreb, 2002); and Clockwork 2000 (Clocktower/P.S.1, 2000). In addition to the publications accompanying her exhibitions, Ms. Marcoci has written extensively on modern and contemporary art and taught at Yale University and CUNY, New York. She holds a PhD in Art History and Criticism from the Institute of Fine Arts, New York University.

Mr. Biesenbach and Ms. Marcoci co-organized the exhibition Take Two. Worlds and Views: Contemporary Art from the Collection (2005) and are currently working together on the exhibition Geometry of Motion 1920s/1970s, which will open at MoMA on March 19, 2008.

The New York showing is made possible by the Mimi and Peter Haas Fund.

Additional funding is provided by Jerry I. Speyer and Katherine G. Farley and by Skagen Designs.

PUBLICATION:
The exhibition is accompanied by a fully illustrated catalogue titled Take your time: Olafur Eliasson, which is the first American publication to fully assess the critical context of Eliasson’s practice. Developed in close collaboration with the artist, the publication investigates the complex lineage of Eliasson’s projects, and includes a rich selection of plates surveying approximately 70 of his most significant artworks. Edited by Madeleine Grynsztejn, the publication includes original essays by Mieke Bal, Klaus Biesenbach and Roxana Marcoci, Daniel Birnbaum, Pamela M. Lee, and Henry Urbach, as well as a conversation between Eliasson and artist Robert Irwin. Featuring a complete exhibition history and bibliography, it provides a critical assessment of Eliasson’s oeuvre. It is available at the MoMA Stores and online at MoMAstore.org. It is published by the San Francisco Museum of Modern Art in association with Thames & Hudson, New York and London. Hardcover: 10 x 11 1/2 inches; 276 pages. Price: $50.

TRAVEL:
The exhibition will travel to the Dallas Museum of Art, where it will be on view from November 9, 2008, through March 15, 2009; and to the Museum of Contemporary Art in Sydney, Australia, in the summer of 2009.
www.momaps1.org