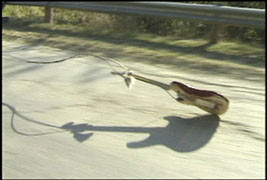 P.S.1 Contemporary Art Center presents Organizing Chaos, a group exhibition investigating notions of chance and determinism. Featuring works from the 1950s to the present, the show is particularly focused on the musical scoring of ambiance, the ways in which randomness is scripted into structured systems, and how order is imposed upon the indeterminate. This exhibition is on view in the First Floor Main Gallery from May 24 through October 8, 2007.

Organizing Chaos is physically centered around the Luke Fowler video, Pilgrimage from Scatter Points (2006). The 45-minute piece incorporates archival footage and documentary material about British composer Cornelius Cardew's Scratch Orchestra, an improvisational group that utilized found, graphic scores rather than traditional sheet music. Similarly, the exhibition will include Bruce Nauman's textual component to his 2001 installation Mapping the Studio I (Fat Chance John Cage). Comprised of a printed log recording the chance events in the artist's studio, it is a banal yet humorous record.

Also featured is John Cage's 4' 33" (1952), a seminal score of ambient sound in which the musician is instructed not to play for the duration of the piece. Robert Smithson's Rundown (1969) and Christian Marclay's Guitar Drag (2000) introduce randomness into the natural landscape–asphalt and other molten liquids are poured over a cliff in Smithson's film, and Marclay's video records the sonic destruction of the instrument as it is pulled along a road. Other works include installations by Hans-Peter Feldmann and Tomoko Takahashi, which both highlight the cumulative power of photographs; a sound piece by Stephen Vitiello that layers barking dogs and firework explosions; and a film of drifting soap bubbles by Rivane Neuenshwander and Cao Guimaraes that realizes the abstract forms of atmospheric conditions.
www.momaps1.org