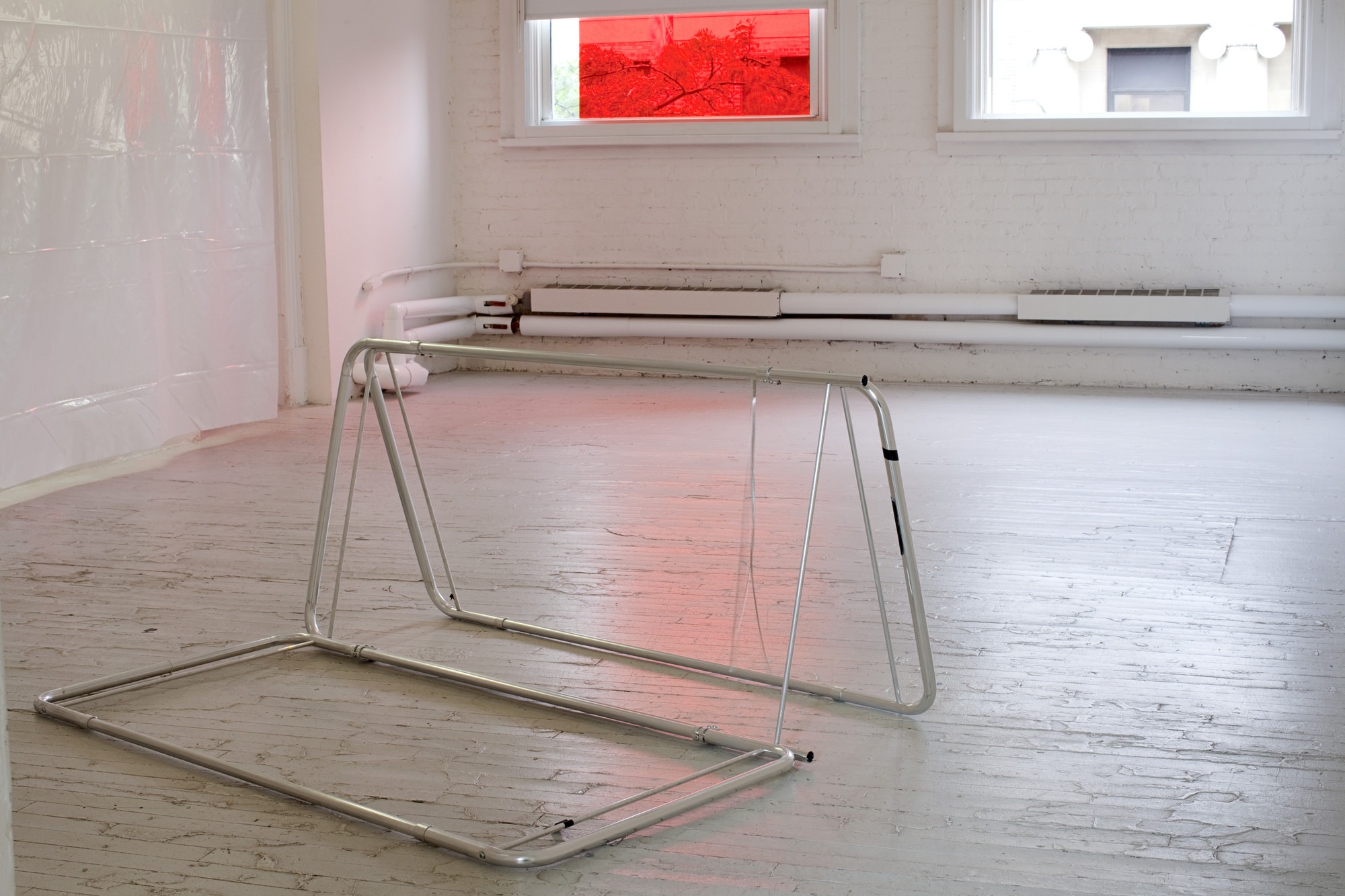 For her MoMA PS1 exhibition, Akdogan presents a new group of works, featuring sculpture, lighting alterations, and a 35mm slide projection. Akdogan utilizes no photographic processes in creating the slides; rather, each frame is assembled from layers of lighting gels, light diffusers, correction gels, and commercial packing plastic. Each carousel is composed of sequences that explore a surface constraint, or material limitation, found within the film and packing materials. In total, the exhibition creates modulations of light, color, and space while keeping apparent its means of production.

Edgardo Aragón: Family Effects
The thirteen episodes that comprise Edgardo Aragón’s video Efectos de Familia (Family Effects) (2007–9) resemble children’s games intensified with disturbing violence. The work’s staged depiction of assassination, punishment, and interment are based on actual events that involved Aragón’s extended family and their brushes with what the artist describes as “organized crime, [the] abusive pursuit of land ownership, and involvement in social corruption.” In one sequence, a group pretends to kill a car driver by firing a barrage of bullets at the vehicle; the segment is based on the actual murder of Aragón’s cousin in the 1990s. By inviting young family members—cousins, nephews, and the artist’s younger brother—to enact the roles in the places where Aragón used to play as a child, the artist further compounds the role of family in his work. According to Aragón, the adolescents in his video are all too young to have had direct experiences with the events they recreate, and were unaware of this side of the family’s history, although repercussions continue to be felt via social stigmas and other means. By making the video with family members, he seeks to prevent the cycle of violence from perpetuating on to another generation.

Edgardo Aragón (Mexican, b. 1985) lives and works in Oaxaca and Mexico City. He graduated from ENPEG La Esmeralda, Mexico City, in 2008. Aragón currently has a solo exhibition at the LAXART Off-Site Initiative at the Luckman Gallery, Los Angeles. His work has been included in international festivals and venues including the 12th Istanbul Biennial; the 8th Mercosul Biennial; Musée d'Art Moderne de la Ville de Paris; Museo Amparo, Puebla; BOZAR Centre for Fine Arts, Brussels; LABoral Center for Art and Industrial Creation, Gijón, Spain; Ambulante Documentary Festival, various cities in Mexico; and the Festival of Contemporary Art, Prague. Forthcoming exhibitions include the opening of the young artists program in MUAC-UNAM, Mexico City, the Moscow International Biennale of Young Art, and the International Documentary Festival of Marseille.

Ilja Karilampi: The Chief Architect of Gangsta Rap
Ilja Karilampi’s video The Chief Architect of Gangsta Rap (2009) makes the conjecture that Andre Young, better known as Dr. Dre (b. 1965), studied architecture before becoming famous as a hip-hop producer and rapper. The Berlin-based artist describes Dre’s rise in the music industry, from his early techno-influenced records, to his role in the controversial group N.W.A., and finally to Dre’s solo albums and major collaborations with fellow rappers Snoop Dogg, Eminem, and 50 Cent. Throughout the video, the artist proposes Dre’s connections to and opinions of the work of Modernist architects like Le Corbusier (1887–1965). Karilampi also incorporates his own biography into the video, speaking about how his life has intersected with Dre’s music. Though Karilampi offers no proof to his assertions, the video presents its own, nearly convincing logic. Although imagining of the types of buildings the music producer would design may seem far reaching, Karilampi’s suggestion that urban planning—in this particular case, it is that of Los Angeles’s Compton neighborhood—significantly helps in shaping the culture of a region contains more fact than fiction.

Ilja Karilampi (Swedish, b. 1983) lives and works in Gothenburg and Berlin. He graduated from the Staatliche Hochschule für Bildende Künste, Städelschule, in 2010, and his work has been exhibited at Kunstverein Medienturm, Graz; Frankfurter Kunstverein, Frankfurt am Main; and Elaine MGK, Basel. Karilampi was also featured in the group exhibition based in Berlin at Kunst-Werke (2011) and in the Nordic Pavillion, Architecture Biennale, Venice (2010). In fall 2012 he will release the DVD edition of h12dumentary at Sandy Brown, Berlin, as well as the book The Hunter in the Armchair, published by Morava Books.

Caitlin Keogh: Good Value, Fine Quality
Caitlin Keogh presents two series of drawings largely inspired by commercial imagery and textile patterns from the early to mid-twentieth century. In her most recent drawings from 2011 and 2012, Keogh references hand drawn advertising and illustration of the 1930s, particularly from Harper’s Bazaar. Her use of pattern and decoration merges representational elements with abstraction, suggesting optical effects that create depth or flatten space. In some works, ribbon-like compositions appear to twist and fold, alternating between abstract forms, bursts of color, or floral motifs. Rather than nostalgically looking back to the period, Keogh investigates the construction of imagery that has been long targeted towards women and the visual culture that continues to do so today.

In her Ambition series (2010), the artist draws on the legacy of abstract painting and commerce by referencing Cecil Beaton’s 1951Vogue fashion shoot that incorporated paintings by Jackson Pollock. Her drawings include silhouettes of Beaton’s model dressed in a Dior “New Look” gown set amid motifs based on an earlier painting by Keogh, which featured fabric patterns and decorative designs.

Caitlin Keogh (American, b. 1982) lives and works in New York City. She received her MFA from Bard College in 2011. Her work has been included in exhibitions at Kunsthalle Zürich, Switzerland; Mu.ZEE, Ostend, Belgium; Soloway, White Columns, 179 Canal, and Renwick Gallery, all in New York City. Her first self-published artist’s book, Style Manual, was completed this spring. She has a forthcoming solo exhibition at Renwick Gallery.

This exhibition is supported by the MoMA PS1 Annual Exhibition Fund.
www.momaps1.org