That Was Then...This Is Now 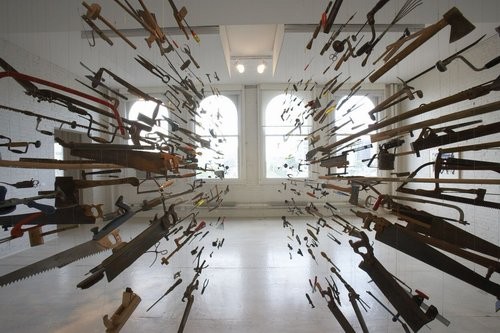 Damián Ortega
Controller of the Universe, Installation view
P.S.1 Contemporary Art Center presents That Was Then... This Is Now, an exhibition featuring spectacular pieces including Leo Villareal’s new LED Flag installed in the P.S.1 elevator; Apolitico, an expansive outdoor flag installation by Wilfredo Prieto; Cannone Semovente, a monumental sculpture by the late Italian artist Pino Pascali; and Lawrence Weiner’s Milk and Honey, which evokes a sensuous and ephemeral dream. This group exhibition is inspired by the artistic and socio-political climate of the late 1960s, and features artists united by the desire to mobilize art as a means of change. Divided into three iconographic themes—Flags, Weapons, and Dreams—That Was Then...This Is Now places these representations as central to artists’ collective aspiration towards progress.

The Flags section presents artists’ interpretations of the American flag and explores elements of nationality, patriotism, and iconography, and the debates invoked by these concepts. Spencer Sweeney takes a police car, an emblem of authority and control, and literally inverts it into a monumental banner. Utilizing the colors of the Pan-African movement, David Hammons champions the United States’ underrepresented minority. Jasper Johns, perhaps the most well-known for his representations of the flag, has returned to this theme throughout his career and considers this loaded symbol as a graphic form.
The Weapons section surveys tools used to impart violence, both literal and psychological. Artists examine how these instruments are utilized in acts of oppression and protest. Andy Warhol’s Electric Chair pares down an apparatus of the justice system to its essence as a killing machine. Damián Ortega’s large, suspended installation, Controller of the Universe, casts tools—constructive and useful—as menacing weapons. Nickels and matches metamorphose into a fleet of 50,000 Soviet tanks as Chris Burden’s The Reason for the Neutron Bomb considers currency as a force that funds and motivates large-scale destruction.

The Dreams section presents future-oriented and activist art through political posters and graphics, the publication as conceptual art project, cinematic protest, and the legacies of utopian architecture. The tradition of graphic art as political protest represented by Emory Douglas and Sister Corita Kent can be seen in the bold palette and graphic lines of contemporary artists Carrie Moyer and Michael Lazarus. Dan Graham, as well as groups like Archigram and Superstudio, are oriented toward a different future, one that challenges the accepted links between artistic forms, and seeks instead to demystify the fields of art and architecture.