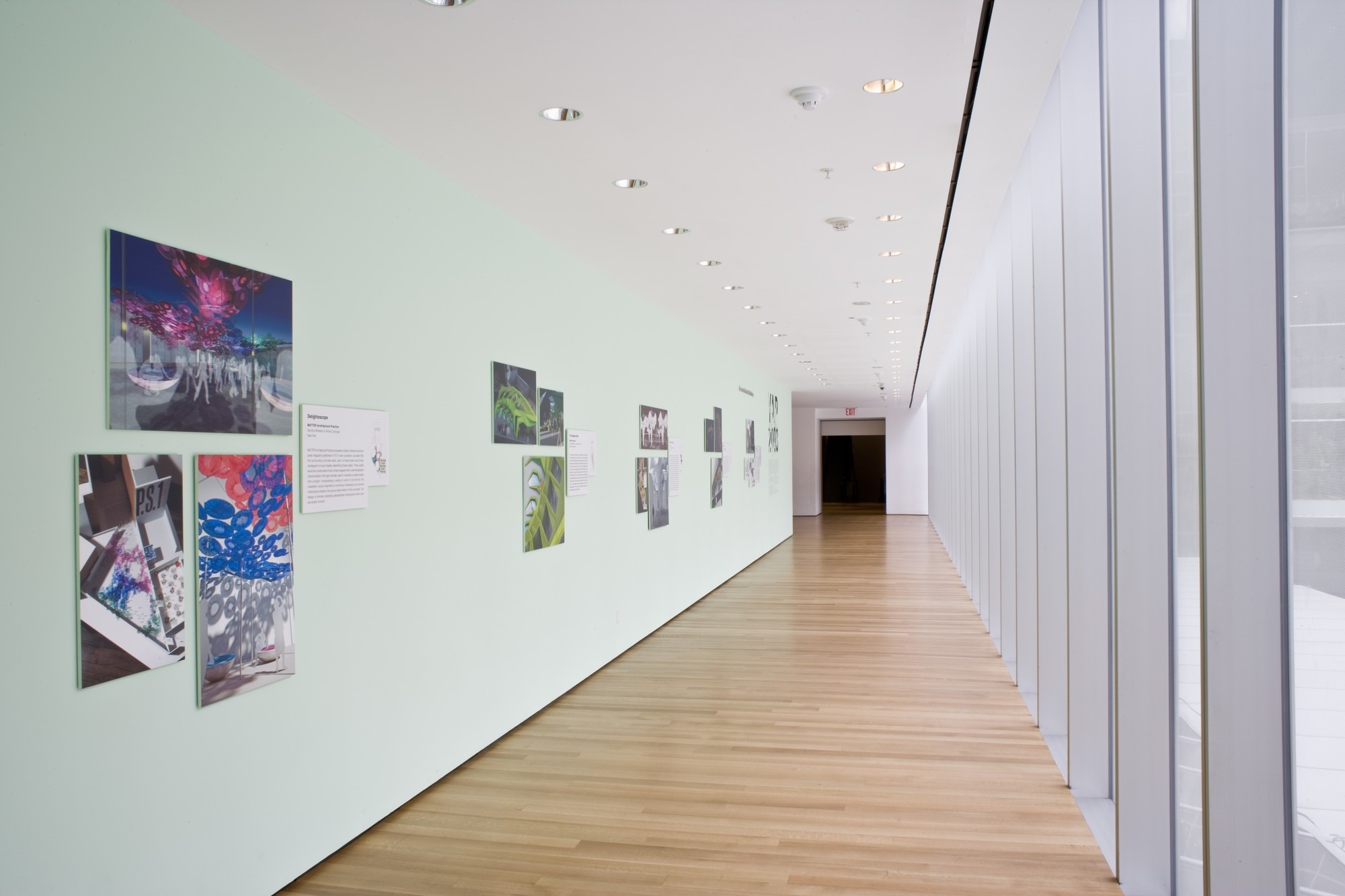 Installation view of the exhibition, "Young Architects Program 2008"
July 20, 2008–October 20, 2008. IN2044.6. Photograph by John Wronn.
NEW YORK, February 7, 2008: The Museum of Modern Art and P.S.1 Contemporary Art Center ar e proud to announce the winner of the ninth annual MoMA/P.S.1 Young Architects Program: WORK Architecture Company from New York. The purpose of the program is to provide emerging young talent in architecture with the chance to prepare and present architectural solutions for a specific site. This year, five finalists selected by a closed nomination process were asked to present an urban landscape for the large entrance courtyard of P.S.1, with the allotted project budget of $70,000. Essential to the design were elements of shade, water, seating, and bar areas. WORK Architecture Company’s winning landscape, PF1 (Public Farm One), will be on view in P.S.1’s outdoor courtyard starting June 20, and will serve as an interactive environment for the 2008 Warm Up summer music series.

PF1 (Public Farm One) is an urban farm concept that evokes the look of a flying carpet landing in the P.S.1 courtyard. Constructed from large cardboard tubes, its top surface will be a working farm, blooming with a variety of vegetables and plants. The structure will create a textured, colorful, and constantly changing surface in contrast with P.S.1’s angular concrete and gravel courtyard. PF1 will work as an interactive bridge between outside and inside, creating multiple zones of activity including swings, fans, sound effects, innovative seating areas, and a refreshing pool at its center. The installation will be a living structure made from inexpensive and sustainable materials recyclable after its use at P.S.1.

Mr. Bergdoll says, “Thirty years after Rem Koolhaas's published Delirious New York, the influential manifesto which celebrated the often unlikely and hybrid mixture of functions in the city's huge buildings and dense districts, Amale Andraos and Dan Wood of WORK Architecture Company bring us the improbable merger of a flying carpet and a farmer's market, a cultivated and cultivatable piece of infrastructure that is a timely comment on issues from post-industrialization to sustainability. Here, the productive garden meets the art gallery, and the urban schoolyard acquires greenery.”

"Receiving this extraordinarily seductive visual version of a farm at P.S.1 struck deep into my rural roots. I own a farm in South Dakota, and my neighbors are very excited about coming to New York City this summer to see the urban competition!" states P.S.1 Director Alanna Heiss.

WORK Architecture Company founders, Amale Andraos and Dan Wood, describe the experience of their installation: “PF1 is an architectural and urban manifesto to engage play and reinvent our cities, and our world, once again.”

This year marks the eleventh summer that P.S.1 has hosted a combined architectural installation and music series in its outdoor galleries. The inaugural project was an architectural installation in 1998 by an Austrian collective, Gelatin. In 1999, Philip Johnson’s DJ Pavilion celebrated the historic affiliation of P.S.1 and MoMA. The previous winners of the Young Architects Program are SHoP/Sharples Holden Pasquarelli (2000), ROY (2001), William E. Massie (2002), Tom Wiscombe / EMERGENT (2003), nARCHITECTS (2004), Xefirotarch (2005), OBRA (2006), and Ball-Nogues (2007).

Amale Andraos and Dan Wood founded WORK Architecture Company (WORKac) in 2002. WORKac is a practice with international roots; the partners have lived and worked in Europe, the Middle East and Asia. For WORKac, the concept of difference is an inspiration - from interpreting distant contexts to rereading the simplicity of everyday life. WORKac believes in the exploration of form through program; utilizing research, interaction with clients, and a keen sense of curiosity to transform functional requirements into new and unexpected spaces, shapes and material combinations.

Mr. Wood has taught at the Cooper Union and Ohio State, and Ms. Andraos was a visiting critic at Harvard and the University of Pennsylvania. Together they teach at Princeton, where both studio and seminar are focused on research into new forms of green construction and the exploration of “ecourbanism” as a model for sustainable development worldwide. This research is currently being organized as a book.

In 2005, WORKac received an American Institute of Architects Design Prize; in 2006, it was selected for the first “New York New Practices” portfolio prize for young firms and was one of ten international offices featured in Architectural Record’s “Design Vanguard.”

SPONSORSHIP
The 2008 Young Architects Program is sponsored by Bloomberg.
Generous support is provided by the Bertha and Isaac Liberman Foundation, Jeffrey and Michèle Klein, National Endowment for the Arts, Richard Meier, and Agnes Gund and Daniel Shapiro.
www.momaps1.org