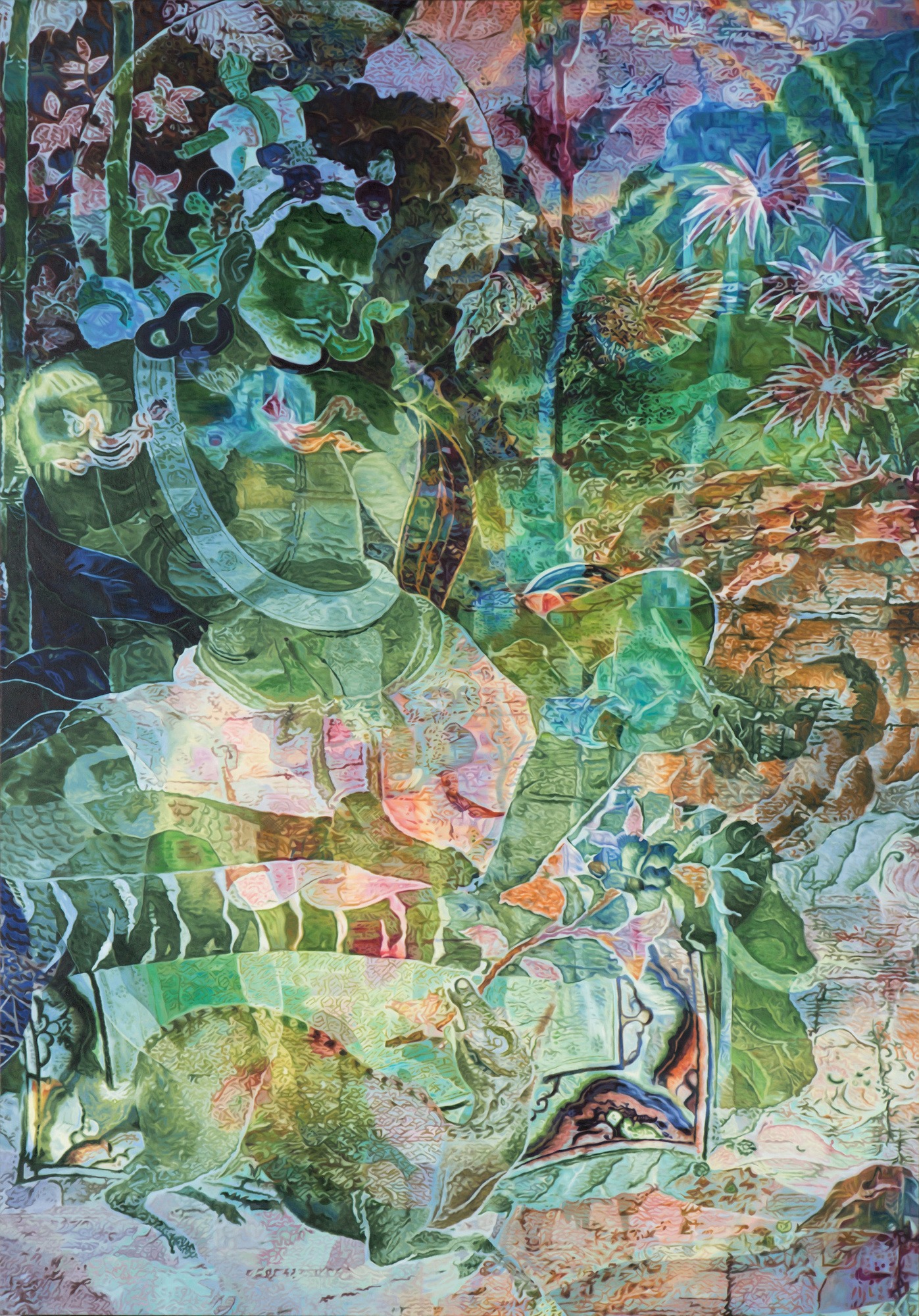 Zheng Guogu
Visionary Transformation of Achievement II. 2016
Oil on canvas
81 1/2 × 56 7/8" (207 × 144.5 cm).
Image courtesy the artist
Zheng Guogu is a central figure among the generation of Chinese artists who came of age after the Cultural Revolution (1966-76), many of whom have grappled with tensions between tradition and modernity in a rapidly globalizing China. Since the early 1990s—a moment of economic and cultural upheaval—Zheng has critically considered the impact of western culture and digital technologies on contemporary Chinese life. Based in his native Yangjiang, on the country’s southern coast, he often combines aspects of Chinese tradition and consumer culture in works that treat each with a mix of respect and irreverence.

The artist’s first solo museum exhibition in the US, Visionary Transformation highlights a selection of 12 paintings that refashion Buddhist meditation paintings, or thangkas, which commonly depict a central deity or the mystical realm they occupy. Zheng digitally layers multiple thangkas into a single hallucinatory image, which he then transfers onto canvas using a number of techniques, sometimes applying oil paint with a syringe in a manner that evokes beading or embroidery. Part of a body of work that the artist began in 2011 known as his Great Visionary Transformation series, these paintings harness the transformative power of digitization to heighten that of the thangkas, which are meant to help guide the viewer toward enlightenment. Using a contemporary medium of transmutation to accentuate the mechanisms of a much older one, Zheng aspires to what he calls moments of “pure energy” in which “you yourself become a part of the artwork.”

The pursuit of such transcendence in daily life recurs throughout Zheng’s practice, which also includes photography and sculpture, as well as architecture and landscape design. Since 2005, he has gradually built and recomposed a large complex of buildings and gardens on the outskirts of Yangjiang, originally based upon the video game Age of Empires. Now called Liao Garden, this constantly evolving utopian domain provides Zheng with a setting for experimentation rooted in tradition, but anarchistically constructed outside of legal parameters. The revisions and expansions that Zheng continually undertakes at Liao Garden evoke the Buddhist belief in the impermanence of the physical realm—a notion given wavering form in his Visionary Transformation paintings, which pose similar questions: What precarious worlds are being created here, and to what ends do they lead us? How should we read their contemplative dictates in our unsteady, globalized world?