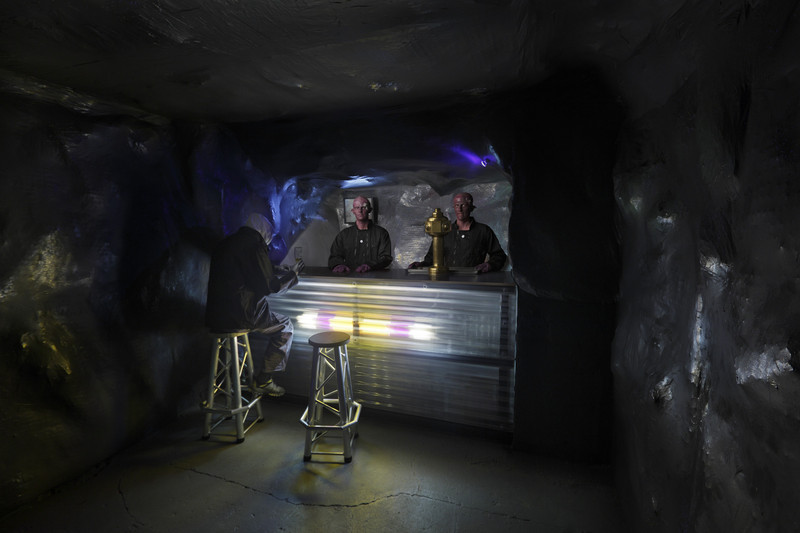 ‘Belly up, Boys!’ shouts the bartender, ordering his guests to the bar.

‘...and it all went belly up’ says the miserable guy behind the bar, sobbing on again about the complete and total failure called his life.

The utopian theories of Retro-Futurology* as opposed to our current perception of future form the center of Daniel Jackson’s second solo-exhibition at PSM. While inviting the viewer to join and watch his first ‘triple-me’ installation event, Jackson pushes his thoughts of possible future theories towards an exaggerated level of self-reflection as seen from opposing perspectives each observing the other.

A. The real but alienated artist, whose peeled-off, external identity is the only remains.
Based on science fiction movies, Jackson experienced as a child/teenager in the 70s/80s in the US, a scenario from his teenage dreams has been created. A mix of memories of his favorite set designs from time travel television series like ‘Land of the Lost’ (1974) or outer space science-fiction like ‘Star Wars’ (1977) was the inspiration for this specific on-site installation of an outer space grotto bar. Part of this installation will be a performance of the artist himself and his clone performing during the opening. The remains of this performance, the costumes, will be left over like peeled off second skins.

B. The filmed real artist, in the role of his dreams.
The second appearance of Jackson is visible in the video displayed inside the bar. Jackson impersonated his teenage dreams of being a star or conquering the universe through digital fiction by the simple use of the green screen. Reenacting Paul Hardcastle’s video clip for his title ‘King Tut’ (1985), Jackson plays the role of a superstar in front of the unfolding universe.

C. The artist as dummy embodying one of his possible dreaded failures.
The third appearance of Jackson is one of his nightmare future realities created by the use of a mannequin. Opposing his positive digital ‘possible future me’ on screen (A) and his de-personalized, alienated appearance in reality (B), the display dummy embodies a fear of failure of the bohemian artist (C).

The understanding of a plurality of probabilities in the science of Futurology as a main focus in Daniel Jackson’s work, unfolds in this new installation of multiple ‘possible future me’s’ an embodied and concrete visibility. The viewer can experience the drastic change of future beliefs through the confrontation of opposing dreams and fears for our future as imagined during the 70s/80s and now, personified through the artist’s body in three different media. Important arthistorical influences concerning the concepts around utopian theories and the use of fictional architecture can be seen in Mike Kelley’s body of work around Kandor (1999-2011) and Thomas Hirschhorn’s Cavemanman (2002).

* The term was coined by German professor Ossip K. Flechtheim in the mid-1940s, who proposed it as a new branch of knowledge that would include a new science of probability. This term may have fallen from favor in recent decades because modern practitioners stress the importance of alternative and plural futures, rather than one monolithic future, and the limitations of prediction and probability, versus the creation of possible and preferable futures.
www.psm-gallery.com