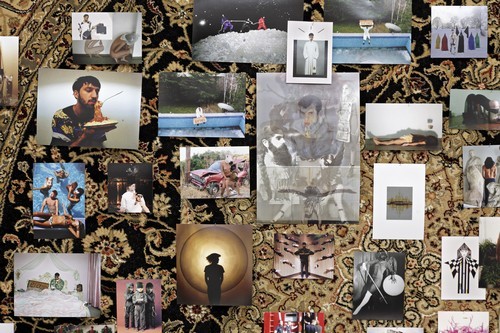 © Voin de Voin
The sudden hallucination of the mnemonic machine, 2010
HOLY SHIT (YELLED JOHN UPON NOTICING THE DELICATE COLOURS OF THE SUNSET)
curated by Fanny Gonella.

For some time, word has been going around that god cannot be seen, and consequently that one cannot represent him. Nonetheless, what was one of the biggest picture industries, the Catholic Church, was ruled under His authority. Its abundant production seems to counter-balance the invisibility of its ruler and, likewise, the intangibility of the desires inherent to its belief system, such as immortality and protection against the arbitrary character of life.

Catholic imagery plays with fears and uncertainties, sometimes by formulating and underscoring them, sometimes by providing consolation. Despite the weakened presence of the Catholic Church in modern western society, the characteristics of its pictorial universe have maintained their currency. Such a visual education has led to the belief that representations have the ability to show us something intangible, beyond the visible.

This religious imagery deploys its power by functioning as revelation: it seeks to show us the previously unseen, that which can only be imagined. It becomes an oracle of the invisible by making the picture’s surface intertwine with the intangible. Images produced in relation to the unseen further activate the power exerted by religious pictures as they rely on the syntactical operations of this imagery and confront us with things we cannot directly experience.

The works presented in this exhibition function as subjective mental images. The collages by Ray Johnson reveal his fascination with the essence of the image, repeatedly reworked and in a constant state of renewal, displaying his attempt to reach for the core of the image. For her piece, Nadira Husain works with the superposition of patterns. The various shapes of these patterns cover the surface of her work without interruption, becoming embedded within the flatness of the image, which ultimately leads to the disappearance of its subject.

Agnieszka Brzezanska presents two videos in the show, which both turn found situations into images. In a very simple and direct manner, the artist points to a spontaneous attraction for impalpable images, shich in the work are created by shadows or opacity. Voin de Voin composed his work as a tribute to the disappearance of his own presence. By juxtaposing numerous photographs of himself, de Voin renders his figurative self-portraits abstract, through the deployment of strategies of accumulation and fragmentation. Shannon Bool focuses on the intersection of natural and cultural elements, the latter being projected onto the former to produce incongruous images and objects.

These works confront us with the human attachment to a belief in a “better world”, necessary to ease man’s precarious position in the face of the unknown and uncharted. In regard to one of the beliefs about art raised by religion, namely, that one of art’s primary functions is to disclose a “better world”, the exhibition considers the inherent ambivalence of images that investigate their ontological dimension by exploring their own surface.

The pieces in the show, be they sculptures, videos, or installations, function here as images. They address a belief system that continues to be at work in images since religious institutions handed them part of their authority. By doing so, these images confront us with current strategies of expressing the uncharted by working with the surface of an image.
www.psm-gallery.com