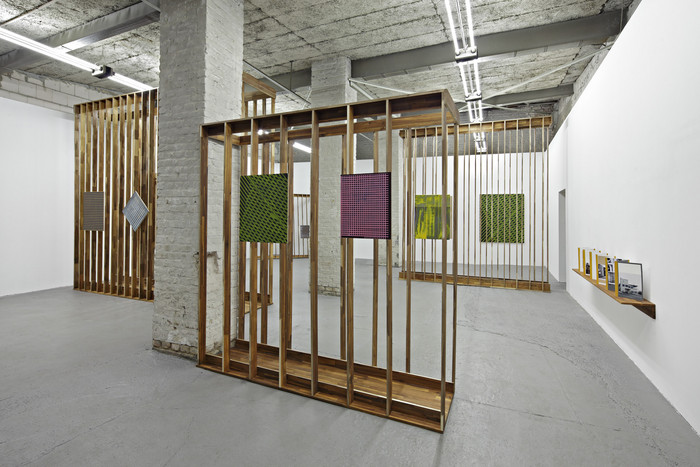 “ ... the painting should give man a sense of place: that he knows he's there, because in that sense I was there...”

This quote by Barnett Newman forms the source of Øystein Aasan’s second solo presentation at PSM, in which the artist is furthering his interest in the relationship between his work, the viewer, his own presence, and the space the work is exhibited in.

Øystein Aasan presents a new series of works based on the rasterizing element of the grid, which usually forms the base of his collage work. Throughout a long process of using different media - from pencil to colour - to draw/paint grids as a system to sort and collage historical images and
text documents, the artist arrived at the point where the collaged content could be replaced with new sets of rules, making it possible to try out both the optical presence of the grid itself and the conceptually derived image.

But in comparison to classical painting, these painted grid images have been made with his carpenter tools. Instead of brush and canvas, Aasan worked on his images with the tools he had available in his wood workshop: cardboard pieces to apply paint, a chisel to remove tape, wood as a surface to work
on; thus placing the work more in the hemisphere of construction than painting.
To underline the artist’s and the work’s presence in the space, the painting and colour studies shown at PSM are mounted on custom-made wooden structures that are not themselves part of the work. These “display units” - a term used in a number of works by Aasan since 2005 - frame the work in a way that multiplies the element of the grid. The structures make it possible to look and combine several works at the same time, from the same point of view. A helpful fact to the viewer to understand the principles the artist established to research in his studies: to copy already existing paintings, produce several new ones from each “original” work, and by doing this trying out pictorial conventions like scale, cropping, exchanging foreground/background, picture in picture or turning the composition.
www.psm-gallery.com