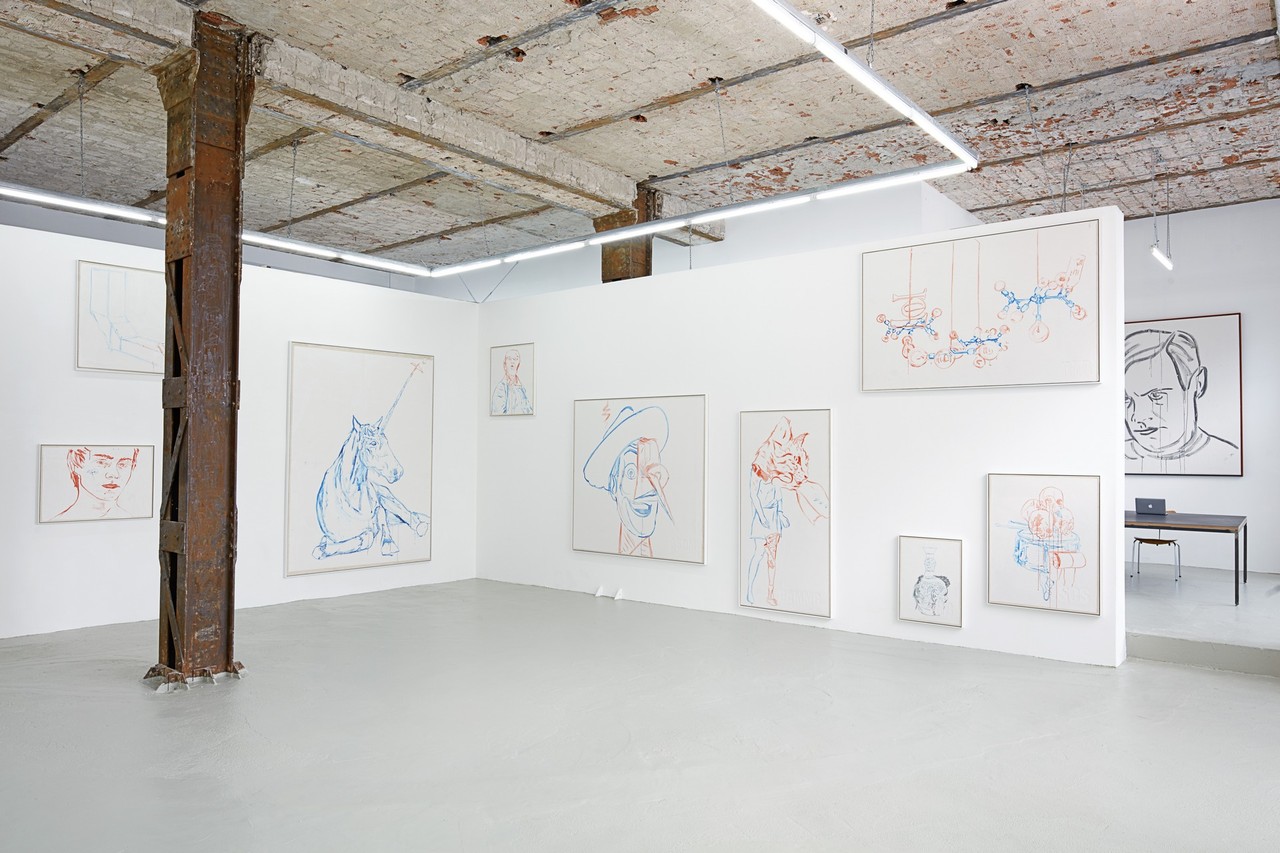 The work of Paolo Chiasera conflates the position of artist and curator to unsettling effect. Known to create contexts for “exhibitions,” his exhibitions themselves are also works of which are liable to function as ongoing, evolving works of art-cum-exhibitions. Already harried, traditional ontologies such as “work of art,” “exhibition,” “artist,” and “curator” become even more harried and destabilized in what he does, which, in this case, border on the provocatively monstrous. Indeed, authorial categories are unsettled and blurred to the point of becoming not only indistinguishable, but also ultimately shed altogether.

For his exhibition at PSM gallery, Chiasera likens himself to a kind of Doctor Frankenstein, assuming a similar, if proleptic procedure of collaging, suturing and hybridizing both on the canvas and in the minds of his viewers. Drawing pictorial inspiration from the 54 selected artists participating in Gallery Weekend Berlin, Chiasera has fused together motifs from the practices of different artists and generated mutant paintings. In doing so, he preempts the mnemonic morphological blurring that is bound to attend the exposure to so much art, in which works of art overlap and mutate in viewer’s memories. It’s as if, in the canny spirit of Manet, he is constructing the conditions of pictorial déjà vu, but with a weirdly phantasmal edge. Furthermore, using a technique of cast and mono-print on plaster mounted on canvas, he also conflates and adds the initials of the respective artists to the lower, right- hand side of each canvas. So do Roni Horn and Bernd Lohaus become HL, while Rebecca Morris and Robert Kuśmirowski become MK, and so on and so forth. Paradox and contradiction deliberately dogs Chiasera at every turn of the project. For instance, the byproduct, which the artist characterizes as a result between notes and fresco, is both provisional and set in stone.

Additionally, these works have a way of both affirming and undermining the experience of Gallery Weekend. They affirm in so far as repetition (seeing again) creates the conditions of memory, while experiencing it under the conditions of a kind of parody are liable to deflate its singularity and uniqueness. In doing so, these Frankenstein paintings scrutinize and question the nature of Gallery Weekend every step of the way, from the significance of the signature to the shared, institutional framework of the weekend itself. He has a created a monster, so to speak, that could be said to reflect the monstrous surfeit, the plurality and multiplicity at the heart of contemporary art as embodied by Gallery Weekend.