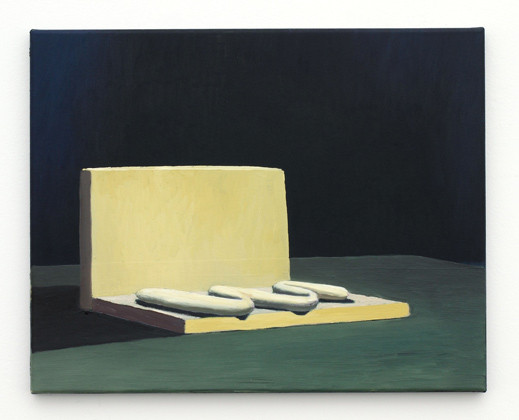 RaebervonStenglin is delighted to present an exhibition of entirely new work by the British-born, Berlin-based artist Ivan Seal. According to the artist, his work is a ‘hand-eye parasite that grows and grows’, likening it to ‘The Aristocrats’ joke comedians only tell to fellow professionals whose aim is not the punch-line but a middle so filthy it can barely be told; to the visions experienced in the comedown of a trip when one’s eyes and synapses see multiple realities; and to puzzles to which there are no wrong answers only a myriad of solutions. Paint is many things in his work; but it is also just paint, laid on a canvas, as bold, dumb and brilliant as that permits.

Seal’s paintings are brilliant and dark in equal measure. Their colours are lurid as though lit with an artificial glare, yet disappear into shadows; and there is an exhilarating drama to their compositions in which plinth-perched forms seem likely to topple or else collapse into inchoate matter. His images read as part geometric abstraction, part hyper-real fantasy. Their rhythms cite the history of still-lifes, recalling the elegant contrivances of Chardin or the blackly delineated folds encountered in early Cézanne wherein the representation of a sculptural reality vies with paint’s own materiality. Seal’s subjects, however, are unlovely and peculiar: hunks of clay, string and tumour-like congestions of paint, for instance, set off against backgrounds that veer garishly from one hue into another. It’s an iconography the artist has evolved over time in which paint slips disconcertingly from tool to subject matter, becoming as it does so embodiments of psychological reckoning; a physical expression of the gunk of memory through which each of us fashion our worlds. Only ever painting from his mind, never from an object or image in front of him, Seal sets the imagination’s triumvirate of improvisation, invention and memory to work to come up with paintings at once flat and three-dimensional, realistic and yet like nothing ever seen before.

Seal works with systems, liking the random injunctions arrived at through computer programmes (from which he’s generated many of the names of his paintings and made aleatory sound pieces) and developing an alphabet of signs whose syntactical arrangement he readily devolves to curators. Yet equally his painting is the result of day-by-day graft in the studio, a practiced understanding of the effects and illusions that can be wrought out of his medium and a grappling with painting’s fundamental dynamism — the superficiality of its depths and vice versa. Only the open-endedness of his works is certain: they are there for the viewer to complete. If, in the course of his travails, a picture of a sausage emerges, it might have to do with the fact his father’s a butcher, or be a worm-like symbol that’s infested the psyche, but it’s also painting defined not by either its conception or outcome, but in the adventure of its making.