nobody, not even the rain, has such small hands 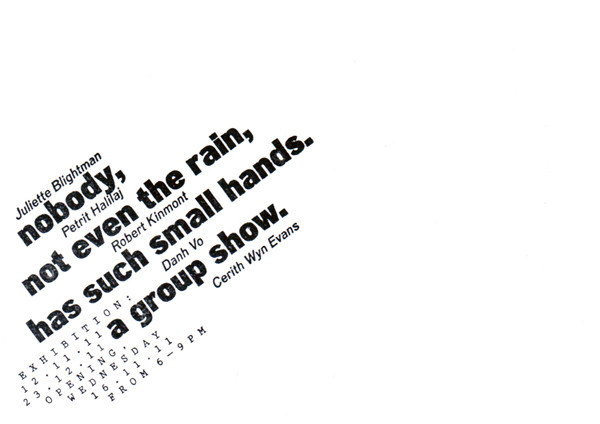 At some point I decided I wanted to create a show about love: a show that both represented and rekindled my faith in art as a tool for expressing something at once personal and universal. The immeasurable impossibility of this task is reflected in the subjective and personal assembly of artists represented in this exhibition. The title stems from the famous
e.e. cummings poem, and seemed capable of embodying my desire to show that which we can know, but not understand.

The work entitled “Astronauts saw my work and started laughing” (2011) from Kosovo-born, Berlin-based artist,
Petrit Halilaj, emerged from another work based on a text passage found by a friend. The work consisted of seemingly benign haystacks situated in the rolling Austrian countryside. After closer inspection, however, these haystacks revealed themselves as small huts with interiors just large enough for two people to lay together in solitude.

In preparation for another exhibition in Berlin, I met Petrit for the first time over lunch in Basel just after he returned from Austria. After he explained the work and showed me pictures, we decided we would like to recreate this work again in a park. The result was a similar kind of hut, but one made of beanstalks that would grow along a tepee shaped trellis. The beans, planted around the base of the structure, refer not only to the ‘magic’ beans from the Jack and the Beanstalk fairytale (and all the promises of wealth and adventure they entail), but also provide a metaphor for the growth of a love, for which the hut was built.

Danh Vo’s work traces a winding path through complex cultural and personal histories. Having grown up in Denmark after fleeing Vietnam with his family, it was only after he befriended the American photographer and anthropologist, Joe Carrier, that Vo discovered a Vietnam he had not yet appreciated. As a young man, Carrier travelled many times to South Vietnam armed only with his camera – resulting in an impressive archive of pre- war Vietnam footage.

Through Vo’s close friendship with Julie Ault, we were both introduced to the work of Robert Kinmont, associated usually with American conceptual artists of the 60s and 70s. After years of not making art, Kinmont found his way back to art production again in recent years. The work, “Measuring Wanting” (2009), whose title is inscribed delicately under a 12-inch ruler half covered in different shades of paint, hanging loosely in a handmade pine box, is actually a kind of found-object. Kinmont later revealed to Ault that he was taken with this ruler when he discovered it many years after having used it to paint his daughter’s bedroom before she was born.

The London-based, Welch artist, Cerith Wyn Evans, is more of a poet whose relentless Romanticism is palpable through is sensitive appreciation for language. The work “The Changing Light at Sandover by James Merrill (1982)” (2004), is a beautiful lantern quietly blinking a passage from the Merrill’s epic poem in Morse code. Over the course of many years,
Merrill composed The Changing Light at Sandover with his lover David Jackson using a Ouija board to channel the words of spirits from the other side and tell their stories.

Juliette Blightman’s works unfold in time and space like meditative, phenomenological narratives, which - at first glance - may not exist at all. Extremely personal in nature, Blightman’s installations, performances and films invite her audience onto an almost filmic journey through a glossary of subtle (if not simple or even ordinary) gestures. The long-time assistant to Wyn Evans, Blightman created the quiet film “en puzzle, en vice”, within his exhibition at the ICA London, looking out through the windows he revealed – as if through his eyes – out into the world.

Blightman realized the moving and melancholic work, “Under One Umbrella” in Los Angeles while travelling with her daughter and boyfriend at the time. Filmed on a rainy day from the roof of the Getty Museum, we encounter nothing but a few clues and nothing close to an explanation, but this quiet film is still somehow moving. The work is screened regularly at the end of each day at 5 pm, referencing both the time of day it was filmed and the conditions of an ending relationship, under which this work was created.

The exhibition will be accompanied by a forthcoming publication that will encompass a collection of texts from the participating artists.