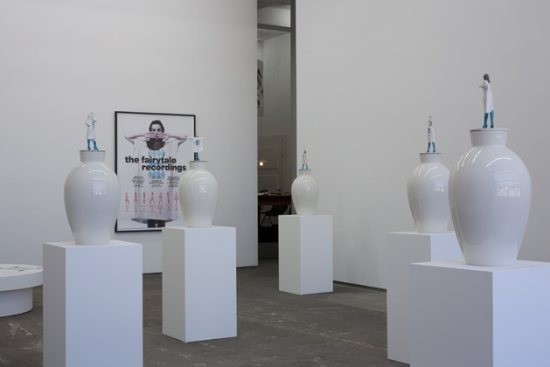 Art, in Saâdane Afif’s highly reflexive practice, becomes words, music and movement, metamorphosing from one art form into another with the help of talented collaborators. Inviting writers to respond to physical artworks, and musicians and actors to respond to their texts, Afif transposes the visual into other senses, projecting the imaginary essence of a piece through the interpretations of others. At RaebervonStenglin, Afif’s first solo exhibition in Switzerland, his work completes a full circle, turning lyrics formed in response to previous pieces, by way of performance and porcelain, into sculpture, and in doing so sealing the process.

The starting points for The Fairytale Recordings are eight earlier works from which writers — Tom Morton, Lili Reynaud Dewar, Mick Peter, Ina Blom and Tacita Dean — have created lyrics to reflect their spirits. Their titles are poetic, invoking dark magic: Ghost, Black Hole and Vice De Forme (A Duel of Warriors) for instance. From these, Afif has worked with the operatic actress Katharina Schrade, turning each text into a performance in which the words are part spoken, part enacted, thus creating a transmission of the text that ends with it being spoken into a special vase which is then sealed consigning the verse to eternity. Afif employed the world-famous Munich Porzellan Manufaktur Nymphenburg to make the eight vases. Each bears a different figurine on its lid depicting Schrade in the pose that she will begin each performance with and the recording information for each work — a reference number, the title of the song and the date. Afif’s collaborators are each important — the writers, actress, her costume designers StarStyling Berlin, and the vase manufacturers —chosen to imbue his piece with their particular savoir-faire. The idea for the work harks back to pre-Edison notions of sound recording, to literary conceits encountered in works by pre-Enlightenment writers such as François Rabelais which imagined the possibility of freezing the spoken word, and to the animist principle that non-human entities might embody spiritual life-force.

Accompanying the performances, are limited-edition posters that Afif has created with the graphic designers deValence. These list all the elements that have led to the show and credit all of Afif’s collaborators, creating visual a statement for the exhibition. This graphic presentation of their names is a motif in Afif’s art and an important aspect of all his shows. In spinning artworks into literature, music, albums, performances, celebratory objects and posters, Afif makes visible the support systems that influence a work’s creation, particularly borrowing from the production process of the music industry. There is an efficiency and drive to this working method in which works create other works and exhibitions grow from and relate to one another. Yet significantly for all its apparent logical progression, Afif art is one of mutation, letting outside elements affect its evolution, whilst seeking out artwork’s essence — the elusive and untranslatable spirit at its core.