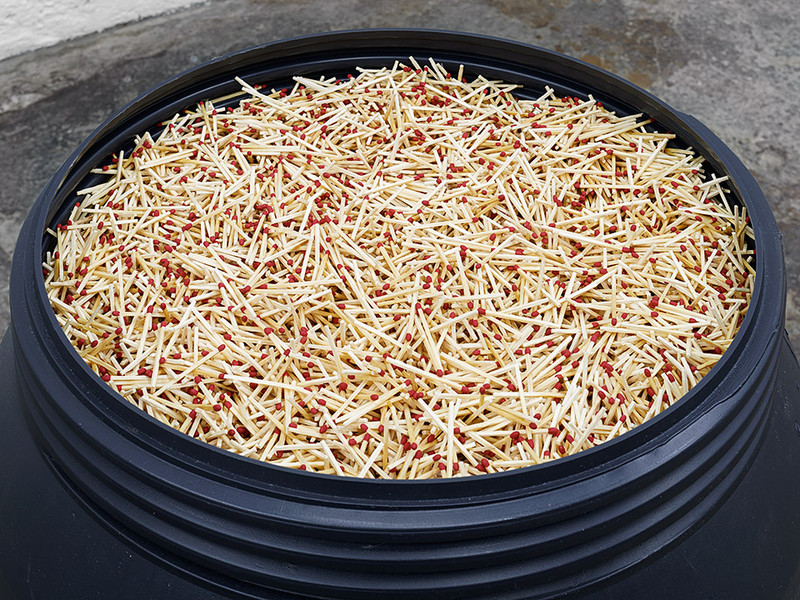 At Thomas Wachholz’s debut at RaebervonStenglin — his first solo exhibition in Switzerland — a single dark wall greets the viewer. Painted in the red phosphorous mixture used on the side of matchboxes, the wall is the titular ‘Reibfläche’, a striking surface against which one can spark a match. A tub full of matches completes the invitation for the viewer to light up on the gallery wall; and in doing so a small erasure of the pigment happens, a trail of light amidst the dark.

Striking a match and watching it burn is the essence of Wachholz’s proposition: the pleasure of a small fire and the frisson of burning against building; but beyond this it is also the invitation to leave one’s mark. A performance that lasts the duration of the exhibition, done not by the artist himself but by anyone who wishes, it is also an evolving installation: a constellation of tiny swabs of light, each the trace of an individual action which cumulatively becomes a drawing. Wachholz has created the phosphorous pigment himself, formulating it exactly so that in striking a match it leaves a satisfying gestural mark, which in turn invites another, gradually covering the surface of the wall in a skein of indexical abstraction. The democratic, ensemble nature of Reibfläche (the first work in which Wachholz has involved the public in its making) is vital to its meaning: anyone can take part; and everyone is responsible for its creation.

In the back room a second work, titled 365, flips the communal activity of Reibfläche to an individual’s solitary creation. A flatscreen monitor depicts Wachholz engaged in the same activity as he invites in the previous room. The piece relays his setting light to a match for every day of the year with dramatic flourish, each time scarring the dark surface they hit. Condensing an everyday activity into just the action devoid of its purpose (the lighting of a cigarette, say) and compressing these moments of release into a rhythmic performance.

Thomas Wachholz was born in Germany in 1984. He lives and works in Cologne and is studying under Katharina Grosse and Marcel Odenbach at the Kunstakademie Düsseldorf, Germany. His solo exhibitions include ‘Alcohol Works’, Roberts & Tilton, Los Angeles (2014); and ‘Alkoholarbeiten’, An der Shanz 1A, Cologne (2013). In 2014 his work has featured in the group exhibitions: ‘Not Abstraction’, Yves Klein Archive, Paris; ‘Backward/Forward’, New Galerie, Paris; ‘daseinsamegenie...’, Baustelle Schaustelle, Essen; ‘On & On & On’, kunstgruppe, Cologne; ‘Shortcuts, Videos in Art’, Chu Galerie, Cologne; and Rundgang der Staatlichen Kunstakademie, Düsseldorf.
www.raebervonstenglin.com