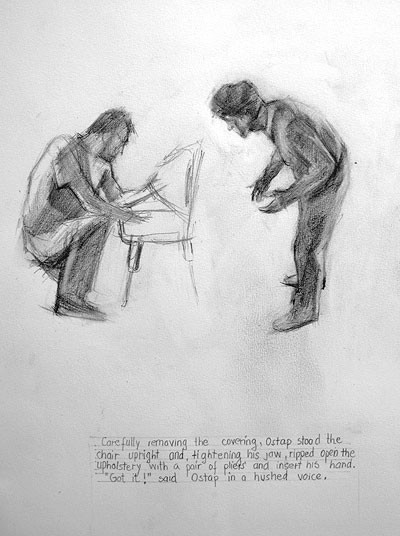 Raster and the Romanian Cultural Institute cordially invite you to the exhibition
Opening - 12th of May 2007, 6 pm - 9 pm
The exhibition will be open until June 23th

"Communism never happened" - this provocative motto and, at the same time, one of Ciprian Muresan's works, sounds like a spell aimed at the past. A range of other works by this young Romanian artist, too deal with history, religion and art in a similarly expiatory way. "End of the five-year plan" (2004) is an Orthodox version of the famous installation by Maurizio Cattelan "Nona ora", "Leap into the void, three seconds later" (2004) is a photography showing a body lying on a street in a Romanian city. It is a probable, effective result of an ostentatious gesture made by Yves Klein 50 years ago. In one of Muresan's video works the heroes are miners who plant flowers at the University square in Romania's capital, as if in a ritualistic gesture of purification. It was them who "marched for Bucharest" at the call of the falling communist regime in 1990.
Simple gestures which explode the aesthetic and commercial dimension of contemporary culture with atavistic strength are the primary obsession of the artist. The dramatic tension of the exhibition at Raster is built around them. The exhibition is composed primarily of video works and a series of drawings, some of which allude - as the older works by Muresan do - to particular literary and film works by other artists. The common theme that runs through these works is the entanglement in the patterns of social behavior, cultural uniforms and the experience of history. By switching roles and changing the context of the works, gestures or events to which he refers, Muresan shows the maladjustment and misunderstanding as emotions which permanently accompany the life of homo sapiens in the post-global world. A number of works also allude to Romanian history and culture, showing the characteristic moment of confrontation between the memory of the recently overturned communist utopia and the new reality of global capitalism. This historic sense of maladjustment in Muresan's art finds its embodiment in children who are frequently the heroes of his video works, among others the already well known film "Choose." (2005) in which a young boy mixes Pepsi and Coca-Cola.
Muresan shows violence and innocence, premeditation and immaturity as complementary forces that fuel each other. Soldiers who peel potatoes or pretend to be dead for photo and the fun of it, seem to be childishly naive and unconscious. However, the children who make the gesture of slitting the throat or read out aloud Eugene Ionesco's famous drama on totalitarianism "Rhinoceros", adopt mechanically the "mature" language of power and violence. Paradoxically, a child finds it more difficult to tie his or her shoelaces, though there is no afterthought to it. Everyday banal rituals mix with the sinister ones, just like the modern civilization mixes different orders and values. The nice "Shrek" performs a traumatic scene from the surreal "An Andalusian Dog", disclosing once more the utopia of segregating the fairy tale like, idyllic oasis from the perverse and brutal reality. In this context, art itself becomes another ritual of driving and extracting nails from the door - as the Orthodox saying goes, materialized in anther work by Muresan - in order to list and redeem sins.
The title of the exhibition "Expulsion from paradise" was borrowed from the book by Ilf and Petrov "The Twelve Chairs" (1928). It is the title of one of the chapters and, at the same time, the title of the 20 drawings by Muresan which illustrate an episode from the book. It is a story about the protagonist's attempt to assume the role of an artist and his subsequent failure. This work, like other projects by Ciprian Muresan, is based on a specific and delicate sense of humor which enables the artist to face history and art without any martyrology. His works are a cheerful acceptance of contemporary reality's uncountable failures and, therefore, contain the strength of a cleansing grotesque.
rastergallery.com