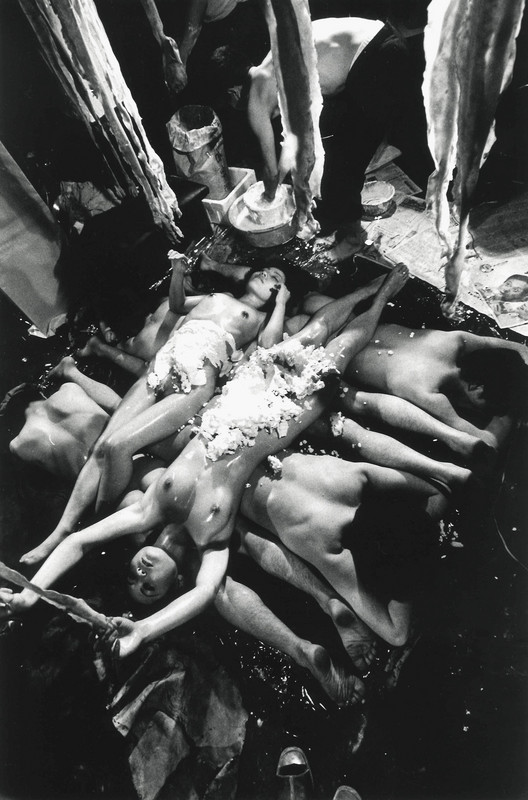 The exhibition takes its cue from an intense period of artistic and political activity at the end of the 1950s in Japan. This was a breakthrough moment for the history of avant-garde art in this country, a time when entirely new forms and strategies appeared, which soon spread beyond Japan itself. The Gutai group functioned in that period over several years, its members developing their own original tendencies based on Pollock's action painting and the French Informel movement. The painterly image takes on a new form in the dimension of time-space - shifting from the canvas into actions that liberate art from the traditional format. This takes place during a time of equally frenetic political action. In the spring of 1960 protests started up in Tokyo against the ratification of a treaty between Japan and the U.S., lasting several weeks and resulting in the death of one of the demonstrators. For artists, who also took part in the protests, these events were an impetus to develop increasingly radical activities in the public space. The Neo-Dadaist spirit, an "anti-art" movement, was liberated, going beyond Gutai's ideas of formal experiments in favour of real action - actions of a deliberate, provocative nature, based in socio-political contexts. Many other collectives, formal or otherwise, rose up on this wave of "art in action". These actions took on the character of both intricately planned street interventions, as with the Hi Red Center group, and ritual performances in galleries and in the public space realised by such groups as Zero Dimension (Zerojigen). The key elements distinguishing the practices of Japanese actionists were the integral and organic way the body and movement fit into their activities, along with the specific locations of these actions.

This movement was trailed by Minoru Hirata, a photojournalist born in 1930 who collaborated with many Japanese magazines, both independent and mainstream. Up through the end of the 1950s Hirata observed the dynamically evolving avant-garde art scene and went on to become a photographer confidante of sorts, his camera following artists into some of their most radical and memorable actions. The publishing of his photographs in the press promoted not only a performative and ethereal picture of "art in action", but most of all these images contributed to the creation of a lasting imagery for these actions, which is particularly significant from the historical perspective of today. The highly intuitive framing of Hirata's photographs carry forward the surreal aura of Hi Red Center's actions, the tension and potential danger of the Kumo Collective street actions. In a highly suggestive way these photographs document one of the most unusual and original episodes in the history of avant-garde Japanese art, which retains its inspirational power to this day. It is only in recent years that Hirata's works have returned to the public forum thanks to exhibitions and publications in Japan, as well as several recent projects abroad.

The exhibition at the Raster Gallery is an attempt to tie the activities of action artists of the 1960s with the works of the young generation of Japanese artists taking up the idea of blending art and reality through performative actions and projects in the public space in an entirely distinct historical and artistic setting. In the works of Ei Arakawa, Yuki Okumura and Koki Tanaka there is a discernible echo of the avant-garde actions of five decades past. Yet as the artists themselves explain, the return to those experiences had not been hitherto made in a natural and direct way, but rather through the art history of the west. Arakawa and Tanaka live and work in the United States, their works created primarily in the context of today's post-conceptual, global art scene. Referencing the practices of the Gutai group in the contemporary performances of Arakawa (such as including their paintings as actors into his own actions), or the drawings of Tanaki, which draw upon the key members of Japan's conceptual and action movements of the 1960s and '70s (such as drawings based on Hirata's photographs), are both proof of the intensive efforts of young artists to rebuild this scattered artistic tradition. Each of them have developed their own practical philosophy in the process.

Okumura (born 1978) - filmmaker, photographer, illustrator and performance artist. His performance art pieces are intricately staged, featuring actors specially invited to participate. He creates the figure of a maze man, fascinated by aspects of communication, such as the various languages employed in the relation between the artist and the audience or the conventions of narration and artistic expression. One of Okumura's recent performances features a professional rakugo actor - a form of traditional Japanese comedy theatre.
Tanaka (born 1975), Japan's representation at the 2013 Venice Biennale, explores the private and public space, arranging and documenting brief, straightforward situations. Basic gestures and objects set up by the artist in an inverted or somewhat absurd order that breaks up the logical scheme of things. "Reality is made up of abstract things and moments", sums up the artist in one of his texts, leading the public onto an alternative reading of the world around us.

Presented side by side, the photographs of Minoru Hirata and the situations, films and documentation of Arakawa, Okmura and Tanaka serve as an intriguing and inspiring point of reference for a debate on the subject of the temporality and efficacy of performance strategies, various forms of activity with regard to the physical and political urban space, as well as with regard to... the history of art. These issues appear especially important here and now, in Poland, Warsaw, where we are the witnesses to and members of various artistic and political "street games", where the tradition of avant-garde performative practices of the 1960s and '70s is not yet history, yet remains a living subject for lively discussion and debate.
rastergallery.com