Monuments On The Move 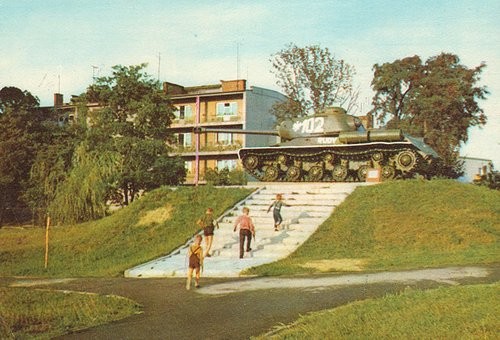 It is with great pleasure and satisfaction that we bring you two exceptional artworks which are an intriguing attempt at redefining the traditional form of monumental sculpture. Though in scale and character they seem to belong to the sphere of open public space, their presentation in the confines of a gallery interior has a particular tone, emphasizing that both pieces are examples of contemporary artworks, genuine contributions to reflection on memory, fate, history and their representation.
Therefore the current show in Raster is not a standard exhibition, rather, it reveals the artistic and political potential of the works in a new Warsaw context. Our city, its culture and tradition, is perhaps an unparalleled witness of monument fever. Here, monuments rather than works of contemporary art stir imagination and collective debates and, according to an ideolgized politics of history, are expected to shape the contemporary identity of the city. History however, knows many cases that cannot be cast in bronze. The works by Bujnowski and Sailstorfer, each in its own way, try to surmount the pathos of History being monuments 'against the grain' - molded by sand, air and chance.
We do not wish to erect new monuments in Warsaw, this is why works by Bujnowski and Sailstorfer will be coming for only a few weeks' visit to Raster, passing by on their way back from Reykjavik where they were presented as part of the Villa Reykjavik project. Following the show the pieces will be on the move again. Bujnowski's sculpture is making its way to the distant Martinique, and Sailstorfer's tank. to Berlin!

T 72 is a popular model of a Soviet tank, in mass production since 1970, which, regrettably, has been tested in the battlefield on numerous occasions, beginning with Soviet operations in Afghanistan. Sailstorfer's "T72" is an inflatable life size scale model of the tank made from tarpaulin. Four air pumps provide it with air supply just to suck it out completely after a while. The fierce and formidable war machine is tamed, like a giant mammal in a zoological garden. In an instant the tank - symbol of violence and aggression - is transformed into an effective show of impotence. The cycle is rhythmically repeated, the machine seems to breathe, rising fiercely and dropping ridiculously like a living organism, subject to the laws of biology rather than history.
The appearance of a tank on the third floor of a pre-war Warsaw tenement is certainly a surprising incident, triggering a chain of unsettling associations. Sailstorfer's great inflatable machine appears to be a humanized, pacifist, version of hundreds of Russian tanks that have, and still do, adorn Polish cities and towns as war relics and memorials. The work by the German artist is a perverse attempt at taming them. But apart from depriving them of much of their past terror it also serves as a warning reviving memories, moving them with its steady breath.

"Cyparis" by Rafal Bujnowski is a seemingly classical monumental form. However, the massive bust of a black male was cast in an unusual material: volcanic sand collected on a beach in St. Pierre, Martinique. The work is devoted to Louis-Auguste Cyparis (or Ludger Sylbaris) known as Samson, one of the two survivors of the volcanic eruption of Mt. Pelée on 8th of May 1902 (three days prior to the local elections in the French colony), which ravaged the city of St. Pierre leaving over twenty thousand casualties. Cyparis became an accidental hero. He survived merely because he had been detained in a tiny cell of the local jail from few days before the disaster. Soon after he gained popularity as a member of the traveling troupe Barnum & Bailey Circus appearing as the "Lone Survivor of St. Pierre." During his residence in Martinique in 2009 Rafal Bujnowski decided to re-examine the figure of Cyparis. The project will culminate with the official unveiling of the sculpture (cast in cooperation with Julian Tomaszuk on the basis of existing photographs) in the city of St. Pierre.
A model anti-hero, a man from the margin who wins fame parenthetically, a tale of the unpredictability of fate in the face of the projected social and historical order. Bujnowski's monument complements this tale, paying a modest homage and bestowing the power of representation to that which eludes systems of political planning.
rastergallery.com