9 Scripts from a Nation at War 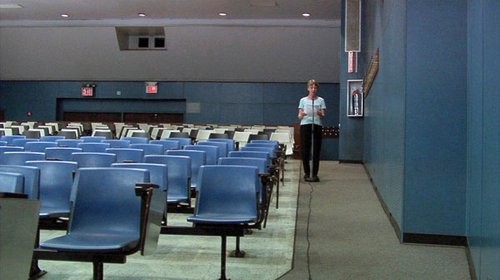 9 Scripts from a Nation at War is a multi-channel video installation that responds to the conditions and questions that have arisen during the military conflicts in Iraq and Afghanistan. It examines the ways in which war determines and "scripts" certain roles such as "citizen," "veteran," "detainee" and "correspondent" and the capacity of individuals to fulfill or resist these. Drawing on the artists' extensive research, the work presents material sourced from people involved in or responding to the war. A central theme is the investigation of how written and spoken language affects identity in times of conflict, as the language specific to institutions, professions and positions in society extend and limit the ways we situate ourselves in relation to others. 9 Scripts is presented as a constellation of videos that stage the speaking of scripts by actors and non-actors alike, some re-speaking their own words, others learning the words of others. These stagings allow inquiry into the recording, reporting, learning and understanding of the present moment and reflect upon how we account for ourselves within it. In doing so, 9 Scripts shows how language and speech are fundamental in defining structures of power. First shown at Documenta 12 in Kassel, 9 Scripts from a Nation at War is presented in a new configuration specifically for the Gallery at REDCAT.

Combatant Status Review Tribunals, pp. 002954-003064 is a five-hour public reading of 18 tribunals held at the U.S. military prison camp at Guantánamo Bay. Based on the transcripts available on the U.S. Department of Defense web site in response to a Freedom of Information Act request, these 110 pages are a small fraction of the material generated by 558 tribunals. The sheer volume of transcripts has effectively obscured them from public view, and the readings make audible a record of these quasi-legal proceedings that had been closed to public scrutiny.
This exhibition is made possible in part by a generous grant from The Andy Warhol Foundation for the Visual Arts. Additional support provided by the Danish Arts Council. In-kind sponsorship provided by CRE Computer & Audiovisual Solutions and Seth Polen and Brent Held of Lacy Avenue, LLC.
www.redcat.org