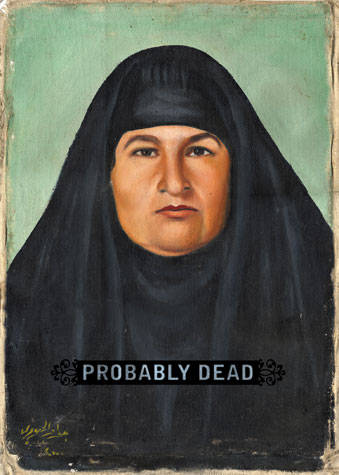 Eternal Flame: Imagining a Future at the End of the World brings together recent projects by six contemporary artists working in Bangkok, Ho Chi Minh City, Los Angeles, and New York. The exhibition elaborates on recent intellectual and artistic attempts to cope with commerce, society, and art. As a series of activities and proposals, the works in Eternal Flame define a lively, socially engaged, optimistic generation -- one inspired to redefine artistic and personal freedoms in the new millennium. The exhibition features works by Rheim Alkadhi, Paul Chan, Pattara Chanruechachai and Pratchaya Phinthong, Tuan Andrew Nguyen, and Lan Tuazon.

Rheim Alkadhi mines recent press and found images in search of inspiration, reassurance and contemplation. Inspired by those who carry on in the mayhem of bullets and explosions, her objects are a manipulation of organic and inorganic materials in search of a reconciliation between hope and futility, between here and there. For Eternal Flame, Paul Chan presents three video works that address the contradictions and consequences of national identity as expressed through war and defense: Now promise now threat (2005), BAGHDAD IN NO PARTICULAR ORDER (2003), and RE_THE OPERATION (2002). As in his animation-based installations, for which he is perhaps best known, such as My Birds...Trash...The Future (2004) and 1st Light (2006), Chan’s documentary-style videos reveal a preoccupation with philosophy and intellectual discourse in relation to the fragility of the human subject.

Dong-Na is a town on the Thai side of the Mekong River that has no paved road access and does not appear on the map. Combining their interest in the function of art as a tool and the “empty platform” of artist Mitr Jai-in’s abstract painting, Pattara Chanruechachai and Pratchaya Phinthong decided to use their participation in the 2006 Singapore Biennial as a means of financing a library for the town. To do so, they installed and sold Mitr Jai-in’s paintings in a silent auction during the Biennial. A second version of Dong-na Project will be presented at REDCAT to supplement the library’s construction. Tuan Andrew Nguyen’s recent work explores the conflicted visual terrain of urban Viet Nam, a dynamic landscape upon which the battle between socialist propaganda and capitalist marketing strategies is waged. For his contribution to this exhibition, Nguyen presents three newly commissioned collaborative paintings that transgress the boundaries of economic ideology to imagine the integration of conflicted systems of signage and marking in Viet Nam. At 5 am on August 27, 2006, Marie Lorenz and Lan Tuazon and friends arrived at Port Morris to install magnets made by seventeen artists who responded to a call for Invisible Graffiti. All works were magnetic and installed temporarily on Richard Serra’s Torqued Ellipse as an act of “resistance against the architecture of behavioral and spatial control.” For her contribution to Eternal Flame, Tuazon will print and distribute a book documenting the event.