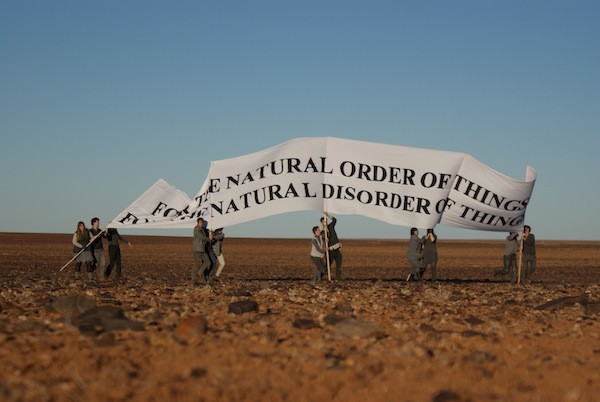 For her first solo exhibition in the U.S., Dublin-based artist Jesse Jones, whose work focuses on the political and social history of cinema, presents a selection of recent film/video works alongside a newly commissioned work. Produced in collaboration with CalArts students during a residency in Los Angeles, Jones’ latest project uses the pioneering Russian theater director Vsevolod Meyerhold’s studies in biomechanics as a point of departure. Situated at the intersection of constructivist theater and its eventual appropriation by mass culture à la Busby Berkeley, the new project is presented alongside such works as The Spectre and the Sphere (2008), a recent film that explores the ideological echoes of Marxism through a ghostly performance of the socialist anthem The Internationale on theremin by Lydia Kavina, the niece and skilled protégé of the instrument’s inventor Lev Theremin. Brought together at REDCAT for the first time, Jones’ works reflect her greater interest in retrieving the artifacts of cultural history and revolutionary politics through the lenses of performance, music and film.

Jesse Jones: The Struggle Against Ourselves is produced in collaboration with the CalArts Schools of Film/Video and Theater.
www.redcat.org