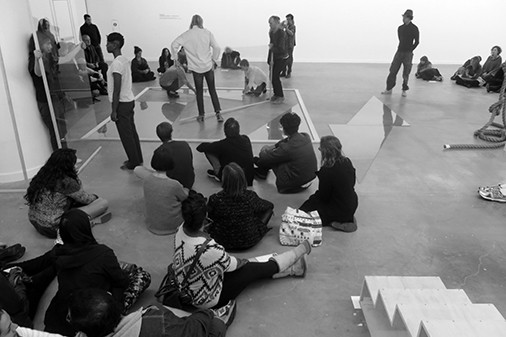 For her first major U.S. presentation, A Reading that Writes - a Physical Act II, Amsterdam-based artist Yael Davids develops a new performance together with Los Angeles-based dance artist taisha paggett, which takes place within the gallery installation. Combining movement and text, the performers activate the elements of the installation, manipulating the arrangement of objects—wooden structures, ropes, and large glass panes. Simultaneously, other participants will rearrange the glass panes in response to the text and the architecture of the gallery.

The performance is inspired by Davids' description of the landscape surrounding the kibbutz where she grew up: “Uphill were the beautiful ruins of the old Arab village Suba. We called it 'the Arab Tzuba'” not fully realizing what that meant. We loved walking there as kids. It was a beautiful place with a beautiful view—this was nature.” As the script develops, we learn that the landscape had been the site of a Palestinian village, its population displaced and its buildings dilapidating into nature.

Davids explores how, through its reading, a text is being written and composed. Considering the possibilities of performance documentation, Davids addresses the relationship between historical and political contexts and the construction of social and personal subjectivities. She treats the elements, narratives and objects of her past performances as components of an artistic palette that reappear in different configurations, experimenting with the multiple possibilities of the material in an evolving body of work.

In this piece, Davids specifically reexamines the appropriation of nature into national, personal and political narrative. She juxtaposes different qualities of objects in the installation and bridges individual associations with political ones. Her script weaves together personal testimony, reflections on the history of art and dance, artists’ writings and a meditation on landscapes and places of political significance. For Davids the notion of being in constant transformation while longing for permanence reflects the legacy of her upbringing and the empowering potential: to change one’s narrative, reexamine one’s history, and imagine territory and space as flexible entities—open for negotiation, amenable to change.

The ambiguous status of objects and places, and how this ambiguity produces meaning, is central to Davids’ projects. In her performance installations, she considers the intersection of personal and political narratives, memory and history, the private and the public, examining the body as a site of convergences and conflicts. What are the traces of history on the body, how does it respond to political context, and how does it function as a location of artistic practice? For Davids the body operates both as a documentary vessel, registering the present, and as a living search for a place within the institution and the grid. The remnants of the performance will remain on view to explore the possibilities of the gallery space as a medium for documentation.