Living With A LOT OF Art 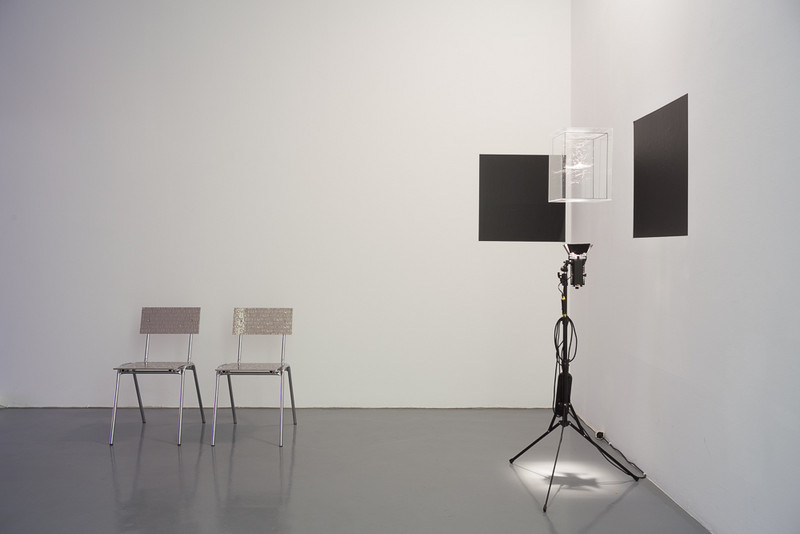 Living With A LOT OF Art is the last part of the 2012-2014 Living With Art trilogy at the Galerie Reinhard Hauff. With over 130 unique works from the period 1975 until today by 40 international artists, the Living With Art trilogy has so far focused on artworks converted to or from furniture and household items. All three shows look at different levels of meaning: the home and private scenery as setting for domestic work, rest, play and conflict, identity and history. In Living With A LOT OF Art (subtitled Discussions), the focus shifts to architectural construction and constraints of physical and intimate space. And the art of living in an alienating reality. The exhibition space is laid out as an immersive environment with works across artistic media performed with the audience. Invited artists Erdag Aksel, Bill Lundberg, Max Müller, Pedro G. Romero, Tomàs Saraceno and Santiago Sierra interact with gallery artists to look at people in (confined) space or the space of people confined, locked into temporary “homes”—be it in prison cells hospital rooms or social housing blocks. The efforts man makes to turn whatever space he/she inhabits intimate and personal with whatever symbols and signifiers (Art) available, underscore a powerful human drive to survive and escape the nihilism of urban brutalism.

The model and designs for the planned new outdoor recreational spaces of the famous RAF prison Stammheim, Kunst am Bau—JVA Stuttgart Stammheim, Neubau eines Zellengebäudes mit 4 Freiganghöfen, 2013/2014 is Josephine Meckseper’s contribution to the high profile competition aiming at bringing top quality art into the contained freedom of the inmates of the prison. That the recreational design presented adheres to the strictest specifications guaranteeing prison guards the complete control and unhindered surveillance at all times necessary for a high security facility is an unusual challenge for an artist who has often appropriated social discord and exposed shiny emptiness of materialism from the other side of the walls. Quite a different contribution to a competition for the creation of a public square in Leipzig is the typewritten two page Conceptual Monument from 2012 by Santiago Sierra, declaring the Wilhelm-Lauschner Platz an extra territorial space outside the jurisdiction of any governing instance and offering the population of Leipzig the sum of money budgeted for the renovation of the square to administrate and dispose of at liberty. Alcohol and addiction imposed Imprisonment and utter loneliness is the sorry lot of a drinker, a psycho-dramatic “ place” powerfully evoked in Trinkerzelle, 2000/2001—from a series of large, monumental sculptural works in wood, marble and wrought iron by the autodidact Stuttgart artist Max Müller—son of legendary gallerist Hans-Jürgen Müller. A group of drawings from the late 1990’s until 2010 by Anne-Lise Coste—partly featured in the recently published book Anne-Lise Coste. Oú suis-je, Editons Patrick Frey, Zürich, 2014—look at the trauma of various forms of institutionalized incarceration, on the one hand, and the desire to escape, to get out, to get away, to disappear on the other hand. The horror of locked-in-syndromes and forced immobility are sensed in the early colour crayon drawings of empty French hospital rooms and beds, which are memories of childhood asthma treatments. Partir, partir loin is the answer. The Cologne sculptor Andreas Fischer has created a new audio-kinetic sculpture in the likeness and dimensions of a very narrow cabin, roughly the size of a portable toilet. Go in there and be sure to experience claustrophobia and a loud urge to escape. Alternative forms of construction and architecture is featured in works by Argentinian artist Tomàs Saraceno: Phoenix, 2013. Dedolight exposes the filigree silk architecture of encased spiders universe recalling futuristic architectural structures. Another work is the magically glowing 2012 iridescent sculptural diptych Capella (Star) / Spica (Star) evoking extra galactic space and possible escapes to other planets, other worlds. Thomas Locher's 2012 series of shiny metallic engraved chair sculptures is a physical representation of the Presence of Absence: The empty chair, the missing person, physical, emotional and spiritual separation. The absence objectified, made permanent and tangible with a title such as I AM NOT HERE WHERE YOU ARE, YOU ARE NOT THERE WHERE I AM. A Calculated Loss of Memory from the series Objects of Hesitation were part of a the first comprehensive solo show installation at the Künstlerhaus Stuttgart by the Istanbul artist Erdag Aksel, who occupies a position of mentor to a whole generation of emerging artists in Turkey. Aksel’s hieroglyphic writing-on-the-wall installation uses wooden rulers to dematerialise and reduce in a search for the essence of identity and meaning. The brilliant Flamenco dancer Israel Galvàn "dances" the spatial constraints, utility and atmosphere and nature of a modest apartment in an anonymous social housing block of flats in the Badia del Vallès, on the outskirts of Barcelona in the 2005 video La Casa by Spanish artist Pedro G. Romero. The music, the passion of the choreography, and the dancer’s energetic attempt to “fill” the rooms and probing how to establish a personalised relationship to them, transforms the space. This video is an extraordinary work and was shown earlier this year at the Württembergische Kunstverein, Stuttgart. The video runs below a 1990 triptych by British conceptual artist Stephen Willats, featuring blocks of social housing flats and various flows and combinations of personalities, dialogues and energies in them. Internationally recognized American video art pioneer and film installation artist Bill Lundberg whose experimental films from the 1970’s deal with the psychological construction of containment, presents a rare and seminal film sculpture Cardplayers from 1975. The film, projected down on a table top to create the illusion of 4 card players around a table is one of the earliest examples of conceptual film, and predates Bill Viola and Tony Oursler. Nr. 1 of an edition of only 3 this museum quality piece of contemporary film archaeology was first shown at the ICA in London in 1975.Photographing Landscape, some of it, 2008, is a sequence of digital images of an indistinct place on the horizon of a flat landscape of green fields, projected on the gallery wall. The work by Danish artist Lasse-Schmidt Hansen, recently included in the ZKM Karlsruhe show, Mapping. Spaces. Netzwerke des Wissens in der Landscahftmalerie des 17. Jahrhunderts 2014, documents a place where nothing happens, and where nothing and nobody moves, and become a metaphor for the unrestricted freedom out there in nowhere.

The Galerie Reinhard Hauff wishes to extend a heartfelt thanks to Künstlerhaus Stuttgart, Württembergischer Kunstverein Stuttgart, Helga Müller, Mariposa, Andersen Contemporary and Galerie KOW, as well as all participating artists for invaluable support in realizing this exhibition.

A publication covering all three shows with texts by Burkhard Meltzer and Tido von Oppeln, of the Zürcher Hochschule der Künste, Institut für Theorie ith is being planned.
www.reinhardhauff.de