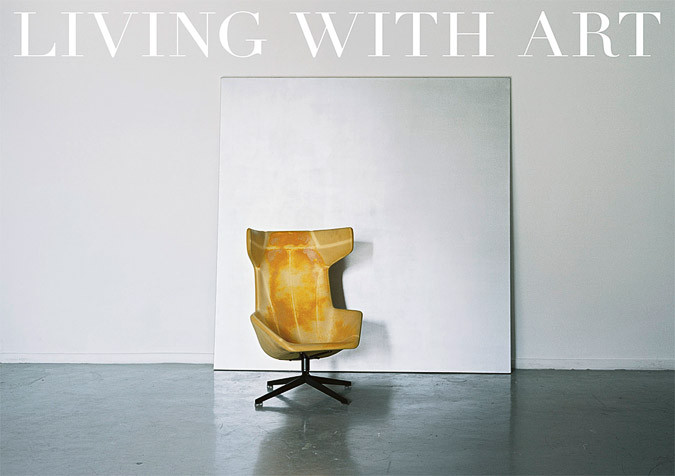 „Living With Art“ at the Galerie Reinhard Hauff is the first in a series of three exhibitions converting the gallery space into a surreal domestic setting where every piece of furniture, every architectural or decorative feature leads a double life as art (artistic statement) and design object-Thing. Through pieces from 1980 until today which cross over from the purely aesthetic and formal art work status into the optionally functional, useful and practical – and vice versa – we engage with works which examine and redefine the status of the object in art as part of the creative process and interact in a provocative visual dialogue with other pieces cohabiting this imaginary domestic landscape.

Appropriation runs as a red thread through most of the display, emphasising the absurd, the playful, the critical, the dada moment and spirit. Furnishing and memorabilia are created by artists who strip the found objects they incorporate as building material into their works of their usual purpose and give them a new job significance, perverting their use value while upgrading their status to Art. Some furniture sculptures, like John M. Armleder’s „AH (Enil Aekat), FS“, 2006, juxtaposing a leather Heberli chair with a monochrome silver coloured painting, employ icons of metro-chic status to invite – yet forbid – actual usage. The „Amazing“-wedding dress and coat by Sylvie Fleury, 2001, is now an electric light sculpture—a relic of a performance involving a dress. Other works like the conceptual dress „Multiple Clothing—Open System“, 1992, by British artist Stephen Willats, and the „Phantom Audience“ vodka dispenser sculpture by FOS encourage participation. Artists like Richard Artschwager and Haim Steinbach, Sylvie Fleury and Josephine Meckseper upgrade the banal and worthless to glamourised cult objects through boutique display scenography, as in Steinbach’s 1986 Shelf „Untitled“, here juxtaposed with Meckseper’s „Shelf Nr. 37“ from 2007. In these works, the fetishisation of goods and symbols provoke a critical discourse on the convergence of consumption, politics and fashion in an interior decoration context. Next to a group of Sylvie Fleury luxury shopping bags „Dallas“, 2012, Gregory Schneider’s „Mattress No. 14 (Rheydt)“, 2008, creates associations of homelessness and alienation. In „Langue/ Parole/ Fenster“, 1997, conceptual artist Thomas Locher converts a large window in aluminium frames to philosophical/ psychological/ political message filters between the interior and the exterior. Bright, coloured coffee table furniture pieces „Sineflam 3409“, 1987, by Thomas Grünfeld employ a living green plant, as a stand in for the (absent) artist. Mark Dion also uses plants in his horticultural sculpture „Nursery“, 2007, – a spectacular, fantastical object with a palm in a baby stroller. In a playful corner, Martin Kippenberger’s children’s chair „Réservé“, 1989, and the Canadian artist duo Hadley + Maxwell’s gigantic favourite-toy portrait „Noah“, 2006, are kept safe & sound with „Sweet Dreams Security“ fences by London based Matthias Megyeri, whose safety curtain is also on display. „Diversions, Deviations, Disjunctions, Dissimmetries, – Like or After ‚Double Self Portrait‘“, is a reference to a 1979 Jeff Wall image, and the title of Lasse Schmidt Hansen’s 2010 version of the armchair in the Wall piece. It sums up his artistic approach, where furniture pieces such as „Uro“, 2006, have been liberated from their original function or significance.

In the table, chair and video installation „Begin Again“, 2007, by the acclaimed American multi-media and performance artist Joan Jonas, the artist is seen in her countryhome performing with various decorative objects and mirrors from her own collection – often used as props in her performances and as inspiration for her works on paper. Wolfgang Flad’s wooden sculptures are also furniture: A filigrane, polychrome door and the chair „Krisenstuhl“, 2012, but French New York artist Anne-Lise Coste makes her position clear in one of her watercolours on view which says: „I’m not a palm tree. I’m not a design table. I’m not a novel sentence“, 2002.