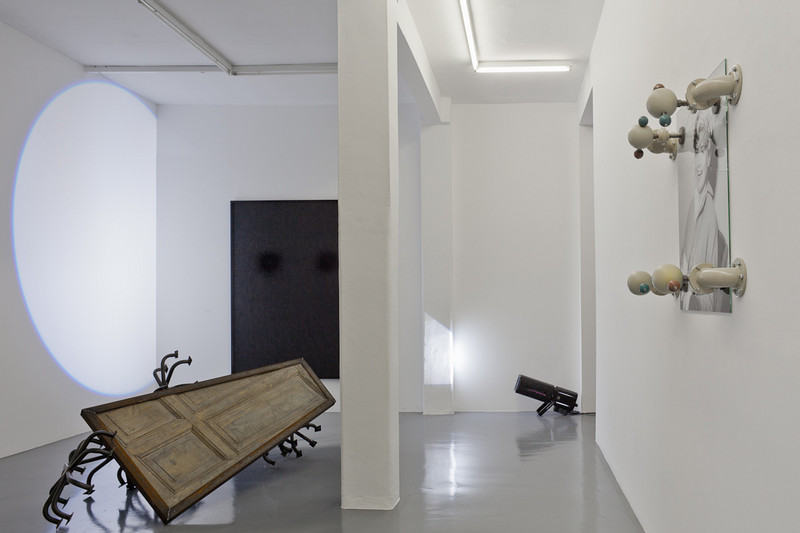 Living With MORE Art at the Galerie Reinhard Hauff is the second in a series of three exhibitions transforming the gallery space into surreal domestic settings furnished and decorated with artworks from 1980 until today. The three shows feature pieces which are converted to or from furniture or household items, by artists who do not as a primary practice create artworks from, or to be used as, furniture. The Living With Art trilogy thus engages with works with conventional or possible practical/useful functions to examine and redefine the status of the object in art and lifestyle.

Whereas appropriation ran as a red thread through most of the display in the 2012 Living With Art show, creating an overall exuberant Wonderland atmosphere, domestic Gemütlichkeit takes on a distinctly ungemütlich quality in Living With MORE Art. Here, most objects have been fabricated to act and look like furniture, but have been stripped of their conventional furniture job. The general mood is nocturnal—sinister and somehow “unbequem”. In a dark corridor where Josephine Meckseper’s 2001 video East German Rooms With a View, filmed mainly in the offices of the 1975-89 DDR Minister for State Security (Stasi) Erich Mielke, the oppressive psychological powers of a regime that functioned even in the absence of the presence of the “Bad Guy” is strongly felt. His desk, his telephone, his teak panelled views with the Spiesser curtains is a stand-in for the invisible authority figure. Past Olafur Eliasson’s low tech Parabolic Light Mirror, 2012, the visitor enters a dark bedroom with massive black curtains by the Canadian artist duo Hadley + Maxwell, moulded in aluminium foil from the heavy draperies of the Schiller statue in front of the Stuttgarter Staatstheater. Converting feather light and metallically stiff by optical illusion into heavy, soft drapery mass, the artists appropriate the trademark pathos of the famous German poet for interior decoration purposes. A pair of 1991 beds and matching bedside commodes by Thomas Locher, last shown publicly in 1992 at Stichting de Appel, Amsterdam, and the Kölnischer Kunstverein are “discussion structures” or conversation pieces engraved “I look at You”, “You Look at Me” and “I’m Being Looked At”, “You Are Being Looked At”. Their dialogue points out the shifting interpersonal positions of subject/object, passive and active. Locher will be exhibiting more recent work this summer, both at the Kunstmuseum Stuttgart, and at the Vienna Secession. The Turkish embroidered silk bedspreads are by Berlin artist Viron Vert, who turns handcrafted materials into comments on Muslim tradition and integration. The viewer is free to speculate himself about the meaning of the heavy, heart shaped metal chains by Matthias Megyeri from the Sweet Dreams Security work group on the floor next to the bed. On a TV on the bedside table runs Kerstin Cmelka’s 2010 black and white video Final Fight, based on scenes from the 1966 film by Mike Nichols, Who’s Afraid of Virginia Wolf, where Elizabeth Taylor and Richard Burton engage in a massive marital psychodrama. Since 2008, Kerstin Cmelka is producing an on-going series of so-called micro dramas, which are filmed performances, where the artist always plays the main role herself together with an amateur actor cast. The decay of relationship models and the interpersonal conflicts resulting from confronting the inconvenient truth about “shared life lies” are main themes. An audio-kinetic sculpture Erdmörtel, 2010, made from a chest of broken drawers and other found objects by Andreas Fischer, recently included in his solo show at the Museum Ludwig in Cologne, says “just go on talking”. Stylistically it fits the retro look of French artist Marc Camille Chaimowicz who has been working all his life with personal interiors in a 60‘s aesthetic. Although this is not a flat... Chaimowics’ colourful wallpaper and asymmetrical floral carpet, last shown at his 2009 show at the Vienna Secession, makes this bedroom interior a Gesammtkunstwerk. The artist “uses” his walk in installations to trigger the feel and atmosphere of times, places and situations—as spaces to re-visit his own Real Life. Two photographs by Jochen Lempert from his show Evidence as to Man’s Place in Nature in 2006, and a group of 2013 airbrush still life’s and interiors by New York based Anne-Lise Coste inspired by Matisse’s happy and sunny Côte d’Azur interiors complete the decoration of the bedroom.

The other gallery area is a psychic space uniting props, signs and symbols of the subconscious. The sculptures by Alexej Meschtschanow, such as Demons Use Closed Doors III, 2008, uses found objects like an old door, chairs and pieces of drain pipes, metal scaffolding and industrial ironwork combined to produce anti-and/or psycho design objects in what David Renggli calls Inquisition style (2009). His works could be props right out of a bad dream with all the power of the symbolic value of architectural and furniture archetypes like doors and chairs. By repositioning objects taking them out of their expected, usual architectural frame, and stripping them of their normal geography or location within an architectural vocabulary, they tell personal stories of being liberated from or chained to fixed positions, ideologies or (broken) dreams. Lasse Schmidt-Hansen’s ceiling stucco fragments View, Berlin 2012 (reconstruction) placed on the floor, on the other hand, have been promoted from their usual assistant-deco function and have switched places from ceiling to floor, from high to low. Thereby they have also switched status from Thing to Art. Schmidt Hansen’s photographic series Making Things examines minimalistically the psychological impact of re- positioning furniture pieces within a personal space to possibly improve work productivity. The Norwegian artist duo Lello//Arnell shows for the first time in Germany a group of furniture derived works, including a pair of large canvasses Anthropometrie, 2013, painted with!! Eames chairs as a variation on Yves Klein’s body print practice and a commode piece The Lesser Ark of Transmission, 2009, whose elegant silhouette has been modelled from a patchwork of chairs, furniture left-overs, a radio and black shrink wrap. A piece of wall-to-wall carpet is now a painting titled Those Eyes; They Follow Me, 2011. The collages by Berlin artist Nada Sebestyén focus on nomadic and migrating living situations. Her photographs of mobile homes in desert landscapes have a socio-psychological dynamic that serves as a reality check on the metro chic home-sweet home phantasy we entertain in the privileged consumer society of the industrial world (Hunde auf Dach, 2000, and Betonpilotis, 2009). Edition Trümmerfrau 2/20000, 1986, is a sculpture by Georg Herold made out of cement poured into a shopping basket.

“With lamps you create your own spatial drama,” says Olafur Eliasson, in a conversation with Ina Bloom in 2005. Light sources within inhabited environments create clarity, comfort or (dis) comfort zones and model spatial atmospherics. Lamp objects have been a major feature in all of Eliasson’s work, be it for domestic, public or institutional use. They span the entire register from the spectacular and elitist (expensive) to the cheap, solar powered light source affordable for the world’s poorest households. Duo-colour double polyhedron lamp from 2011 comes from a series of lamps modelled on crystalline structures and diffuses a soft, multi-coloured light. French artist Michel Verjux only works with light—white light. No shadow, no depth. In numerous interventions in France, Belgium and Switzerland, Verjux projects simple geometric shapes—mainly circles—on interior or exterior surfaces of buildings. He interferes in a non invasive way with their with historical narrative to make the viewer perceive the “Old” in a “New”, contemporary way. As Verjux was installing his work created for the exhibition space, talks and reflections led him to name this work Verschiebung, which also sums up THOUGHTS that are central to the Living With More Art concept. Leaving the show the visitor with be guided by New York artist Sarah Sze’s mixed media Sortie (Exit) sign, Migrateurs, last shown at the Fondation Cartier pour L’art contemporain, Paris, in 1999.

The Galerie Reinhard Hauff wishes to extend a heartfelt thanks to all the artists participating in the show, and to Cabinet Gallery, London, Galerie Klemms, Berlin, Galerie Neugerriemschneider, Berlin and Galerie Dorothea van der Koelen, Mainz for their collaboration and support.

LIVING WITH A LOT OF ART, Summer 2014
www.reinhardhauff.de