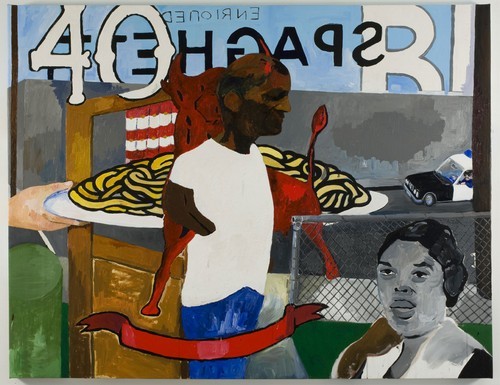 Henry Taylor’s work is happening. It is happening on boxes and cigarette packs, beer cases and canvases, too, and if you are reading this in Los Angeles in April, it’s probably happening there now.
Conceived in three-parts, this exhibition presents the full compass of Taylor’s practice: in New York, his paintings; in Paris, recent sculptures and painted works on boxes; and in LA, his studio itself, transposed in its brimming, full-functioning entirety to the Melser&Hug gallery space.
If such notions of entirety or, for that matter, full-functioning ateliers seem antiquated, it is perhaps because Taylor has hewn to a practice long considered retrograde, portraiture. Taylor’s subjects are his friends and visitors, kids from the block and guys in the alley as documented by the neighborhood flâneur, and they are always colored, whether in black-and-white schematics that recall Kerry James Marshall or William Copley, or in Modilgiani-esque brushwork that implies the protean assignations of race. His paintings have a spontaneous, documentary élan that might suggest the charm of an outsider artist—and indeed Taylor was late to go to art school and quick to leave it—, were they not so involved with an insider discourse. When his paintings quote Manet or replicate Picasso’s Demoiselles, they do so only to reject aristocratic remove for wry reflexivity (the black face beside an odalisque is just as likely Taylor’s).
In an outpouring of painterly productivity, these gestures find their way to whatever surface is at hand. But boxes and cartons that fall under Taylor’s brush don’t end up baptized by it; they remain comically embedded in a world of consumer comestibles and disposable packaging. A detergent box appropriates the Tide logo to emblazon Henry as the new household name; a box of grits is whited out to read just “ITS,” followed in crude pen by “grits.” Whether on a canvas or in his studio, aesthetic space for Taylor is not an alchemist’s lair or a factory. It is another place where life goes on in all its vibrant havoc, and Taylor will bring its happenings into the white cube, even it means moving in himself.
-Joanna Fiduccia

Henry Taylor has exhibited in solo shows at The Santa Monica Museum of Modern Art, The Studio Museum in Harlem, Cardenas Bellanger, Sister Gallery and Daniel Reich Gallery. Additionally, Taylor has been featured in group exhibitions including the Rubell Family Collection, Peres Projects, Berlin, Jack Hanley Gallery, Los Angeles, Milliken Gallery, Sweden, MOCA North Miami, and Ben Kaufman Gallery, Berlin. He will also be included in a forthcoming exhibition at the Saatchi Gallery in London. Taylor received his BFA from CalArts, and lives and works in Los Angeles.
Henry Taylor @ RENTAL coincides with upcoming exhibitions of Henry Taylor’s work at Cardenas Bellanger in Paris from March 14 to April 11, 2009, and at Mesler&Hug in Los Angeles from April 4 to May 9th, 2009.
www.rental-gallery.com